ECB Does A Little More Than Expected….But Not Enough To Dramatically Alter Economic Outlook

• Surprise today is announcement of quite a number of individually modest measures.

• Major initiative is new ‘Targeted Longer Term Refinancing Operations’, effectively a funding for lending scheme; this is useful but effects may not be that dramatic.

• Array of liquidity measures should assist the financial sector but the impact on the broader economy is likely to be fairly modest. • Scale of the measures is relatively modest and they take the form of providing the proverbial horse with greater access to water in the hope he will drink.

• Draghi suggested the ECB could do more if needed but its forecasts assume growth will gradually pick up and inflation will eventually move higher, implying further action seen as unnecessary.

• Understandably Draghi focussed today on what has been announced rather than ‘what ifs’. Our judgement is that Quantitative Easing may still be required.

• For Ireland initial funding boost from TLTROs could be up to €7bn–but draw down to be much, much smaller and difficult to see new lending running far ahead of maturing loans.

As signalled by Mario Draghi a month ago, the European Central Bank cut its key policy interest rates to new all-time lows today. It was also widely expected that other action would be announced to support the lending capacity of the Euro area financial system but there was some uncertainty as to precisely what form this would take. In the event, the ECB announced a large number of measures that should offer some support to lending. However, it is hard to imagine even the cumulative impact of these measures dramatically boosting the outlook for economic growth in the coming year.

That the ECB acted today reflects an understanding that downside risks to the economic outlook still prevail but two considerations likely caused the ECB to stop short of really radical action. The first is a view that the Euro area economy is already set on a path of improving activity that will translate, albeit with some delay, into a gradually rising trend in inflation. Such a prospect is suggested by the new ECB projections which, because of the manner in which they are prepared, do not incorporate any boost from today’s policy easing nor do they take account of the weaker than expected inflation reading for May published earlier this week.

The new ECB projections see Euro area GDP growth slightly weaker in 2014 than previously expected (+1.0% against the +1.2% envisaged three months ago) but this is offset by stronger growth next year (+1.7% against +1.5% previously) and the outlook for 2016 is unchanged. So, the message from the new projections is that any weakness in activity this year is temporary and will be made good in 2015. Similarly, the outlook for inflation this year has been revised down materially (from 1.0% to 0.7%) and there are also downward adjustments to the projections for 2015 (from 1.5% to 1.3%) and 2016 (from 1.5% to 1.4%) but the picture presented here is also one where current weakness progressively fades. So, the broad message of today’s projections would seem to commend sitting tight and waiting for a slightly delayed recovery to take hold.

Even after today’s policy easing the ECB’S Governing Council still judges that the risks to the economic outlook ‘continue to be to the downside’. However, to the extent that the ECB is acting against the risk rather than the reality of an inflation outturn it judges to be out of line with its mandate, it may not feel a need to opt for really radical action such as quantitative easing. Of course, we think there are substantial practical obstacles to such action that ruled it out today even if there may be some form of agreement in principle within the ECB that it could be considered in extreme circumstances. We think this consideration likely caused the ECB to opt for a compromise of announcECB Does A Little More Than Expected….But Not Enough To Dramatically Alter Economic Outlook5 June 2014 3 ing a notably larger number of measures today than the financial markets might have anticipated.

Mr Draghi surprised today in terms of the range of actions he proposed. As noted above, the 10bp cut in the refinancing rate was seen as the minimum action that might be taken. It is very doubtful that a reduction of this limited magnitude from already exceptionally low levels will have much more than a signalling effect in terms of its impact on activity levels in the Euro area economy.

The ECB did announce a notably larger reduction in its Marginal Lending Facility, the penal rate it charges on ‘emergency’ borrowings by commercial banks. This was cut by 35bps from 0.75% to 0.40%. In the current environment, this rate has little macroeconomic significance but today’s action reduces the official rate ‘corridor’ in which overnight market rates would typically settle. As such, this move should reduce volatility in shorter-dated money market rates particularly in circumstances where liquidity has also been significantly boosted.

If the moves in the refi and marginal lending rates are likely to have little macroeconomic impact, the accompanying 10bp reduction in the deposit rate the ECB pays on funds in excess of the minimum reserves that commercial banks place with the ECB could potentially be more significant. This is because it takes this rate to -0.10% and the ECB into the negative territory previously uncharted by a major Central Bank. In theory, this action should have some impact on flows into the Euro area and consequently on the exchange rate of the Euro. However, this sort of influence is likely to be overwhelmed by other factors (including perhaps a perceived reluctance to countenance QE as well as the prospect of a somewhat healthier financial sector) as the rebound in the Euro in the aftermath of Mr Draghi’s pronouncements today shows.

A key problem for the ECB in this regard is that it repeatedly if understandably emphasises that it does not have an exchange rate target. As a result, investors don’t feel particularly aggressive action will be taken specifically to reverse currency strength even if Euro area policymakers might ideally prefer a somewhat weaker currency to assist short term competitiveness concerns and to rasie rather than reduce from current inflation.

Today’s interest rate cuts were very small and Mr Draghi indicated today that policy rates have effectively reached their lower bound (although he did indicate some technical adjustments might be possible). Significantly, he also indicated the ECB weren’t necessarily finished. Unless QE is forthcoming, this implies that any significant ECB Does A Little More Than Expected….But Not Enough To Dramatically Alter Economic Outlook5 June 2014 4 policy support in coming months must come from measures designed primarily to influence the quantity rather than the price of credit though obviously any measures that ease blockages in the transmission mechanism should also have some impact on final borrowing costs.

Some Support For Credit Growth

The ECB announced a number of new initiatives today. The most novel is the introduction of ‘Targeted Long Term Refinancing Operations’ (TLTROs). These will provide a source of additional funding to Euro area commercial banks stretching out to September 2018.

These TLTROs are focussed on lending to the non-financial private sector excluding loans for house purchase. Banks will initially be able to access some €400 billion of funding of this nature that will be made available in two tranches in September and December this year. Subsequent tranches related to banks net lending (i.e. new loans less redemptions) will be available between March 2015 and June 2016. This funding will be priced 10bps above the ECB’s refinancing rate at the time the loan is taken out, implying exceptionally low funding costs over the life of these loans.

Diagram 1 below shows how credit to the non-financial private sector excluding house purchase loans has evolved. Roughly three-quarters of this measure comprises lending to companies and the balance relates to consumer financing.   In the past couple of years, outstanding credit has fallen by around €500bn with just under €190bn of this drop occurring in the past year. Access to extremely cheap term funding will undoubtedly boost this aggregate. However, the trend decline seen in diagram 1 might suggest the current weakness reflects an array of factors ranging from weak demand by borrowers to limited risk appetite on the part of lenders rather than just constraints on funding capacity. 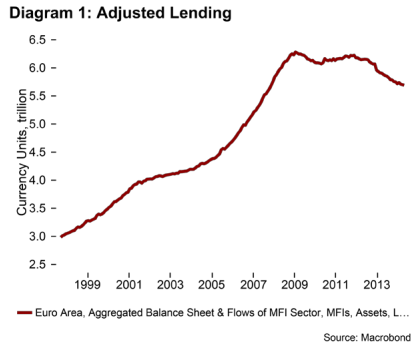 In terms of the Irish lending market, credit to the non-financial private sector excluding loans for house purchase stands in the region of €100bn implying financial institutions will have access to funding of around €7bn under this scheme later this year. This would represent a substantial sum in the context of current economic conditions. It seems extremely unlikely even in the improbable in the event of demand increasing dramatically that the Irish financial sector would be able to ramp up its lending aggressively even if some pick-up occurs. Recent painful experience and the emphasis on developing a sustainable and properly funded trajectory for future credit growth also makes it difficult to envisage sharp growth in net lending in the next couple of years.

Our sense is that any material pick-up in net lending in the Euro area through 2015 and 2016 is likely to owe more to the prevailing economic climate than to greater access to relatively cheap term funding at that point but, at the margin, this mechanism could give some impetus to credit growth at that point. The distribution of such lending growth across various Euro area countries might also be interesting as there may be a reluctance to contemplate an aggressive rebound in economies that have just completed a fairly painful process of deleveraging.  While this may not be an immediate problem, this scheme could also raise some early issues for the new supervisory regime across the Euro area.

The ECB also announced today that it would ‘intensify preparatory work related to outright purchase in the ABS market’. Action in this area has been repeatedly mooted but the limited size of this market and related transparency problems suggest that this will not be the centrepiece of ECB policy interventions anytime soon.

The ECB also indicated it would suspend sterilisation of its Securities Market Programme. Together with the cut in the Marginal Lending Rate and other liquidity measures, this should ensure a degree of calm in money markets.

While it may be overshadowed by today’s other announcements, the decision to continue to provide full allotment at fixed interest rates on all the ECB’s liquidity operations out to December 2016 represents a significant commitment to the continuation of an accommodative policy for a lengthy period.  In this regard, Mr Draghi emphasised that the ECB was strengthening its forward guidance today through this means and the introduction of the new TLTROs. In the context of recent comments by various senior officials of the US Federal Reserve and the Bank of England debating the likely timing of policy tightening, this emphasises the very different stage at which the ECB finds itself.

Radical Action May Be Needed

Of course, differences between the policy discussions relevant to the Euro area and those in the US and UK reflect major differences in conditions between the respective economies. Our judgement is that today’s ECB policy measures in themselves are unlikely to be sufficient to markedly alter the growth outlook for the Euro area economy. At the margin, they will help, particularly in terms of strengthening the financial sector. However, the ‘real’ economy is likely to remain fragile until a clearly stronger global economy underpins export growth. Unfortunately, the immediate judgement of the FX market suggests the exchange rate of the Euro will also remain a constraint on growth as well as a restraining influence on inflation. Continuing near-term risks of weaker inflation and lacklustre activity still point to the possibility that the ECB may have to contemplate more radical action before the end of the year.