Clear signs of a weakening in economic activity

Clear signs of a weakening in economic activity and the persistence of serious strains in the financial system are not circumstances in which policymakers would want to surprise markets.  An awareness of the intense scale of these problems led both the European Central Bank and the Bank of England to ease policy further today, broadly matching market expectations. The fact that the People’s Bank of China surprised markets by making its second interest rate cut in five weeks underlines the global nature of the risks to the economic outlook.

At the margin, the willingness of the European Central Bank to cut its deposit rate to zero (discussed in more detail below) and the tone of comments of Mario Draghi, the ECB President at the subsequent press conference were more dovish than had been expected.  Mr Draghi highlighted continuing risks to the downside for activity in the Euro area economy even after today’s easing.  He added that the ECB still has further artillery although he repeatedly said he didn’t want to elaborate on further non-standard measures at this time.  In response to Mr Draghi’s comments, swap rates softened and, perhaps significantly, the Euro also fell on FX markets.  However, peripheral government bond spreads widened, presumably on disappointment that Mr Draghi didn’t signal any intention to undertake more radical action.  This response suggests how nervous markets are at present and how they continue to crave a ‘big bazooka’ solution.

Although an ECB easing was widely expected today, the precise form that it might take has been a cause of significant debate in the past few weeks.  Pressure for more radical ECB measures from a number of European governments was amplified earlier this week by comments made by Christine Lagarde, the managing director of the IMF, who suggested that re-starting the ECB’s asset purchase programme might be a more effective means of easing policy than cutting rates further.  However, the ECB’s longstanding reluctance to step-up purchases of Government bonds was neatly summed up in recent comments of the Dutch ECB council member Klaas Knot who noted ‘the bond buying programme is in a deep sleep and will remain there.’  Mr Draghi endorsed this sentiment by saying that non-standard measures were not discussed today.  He added that it was not obvious that such measures would be effective in very fragmented markets.  However, a more significant objection seems to be a strongly held view within the Governing Council that such actions would put the ECB beyond the limits of its mandate.  So, today’s ECB press statement instead repeated a segment of last weeks EU Summit communiqué that ‘the ECB is ready to serve as an agent to the EFSF/ESM in conducting market operations’.  Clearly, there continues to be little or no appetite on the part of the Governing Council to act on its own behalf to bring down Government bond spreads.

The ECB has usually altered these its policy rates by the same amount but attention has tended to focus only on the refinancing rate because it is normally the key policy rate determining interbank money market rates.  As the Diagram shows, since EMU began in 1999, market rates tended to set close to the ECB refinancing rate and normally some distance away from both the upper boundary set by the marginal lending rate or the lower boundary set by the ECB’s deposit rate.  In the past couple of years, however, major injections of liquidity by the ECB and market expectations that policy would remain accommodative and/or be eased further have meant that interbank rates drifted below the refinancing rate towards the ECB’s deposit rate.  Given the increasing amount of funds deposited at the ECB (currently €791 bio against an average level of €340 mio between 1999 and 2006), it is scarcely surprising that the ECB deposit rate has become an increasingly important floor to market rates. 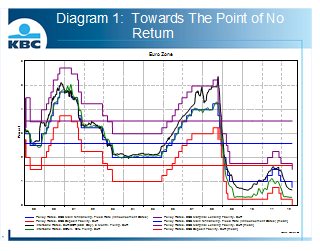 Today’s ECB decision to take its deposit rate and, by extension, the floor to market interest rates to zero is something of a step into the unknown.  As a speech by ECB Executive Board Member Benoît Cœuré (19th February 2012) noted ‘a switch to zero or negative interest rates bears some risks – mainly of a microeconomic nature – which would have to be weighed against potential benefits in terms of additional macroeconomic stimuli.’  Mr Cœuré cited a possible drop in money market turnover, an adverse impact on important market intermediaries, such as money market funds and possible adverse effects on the profitability of commercial banks that could result in a credit contraction.  Mr Draghi was reluctant to be drawn on the possible consequences of a zero deposit rate at today’s press conference but it would seem the ECB Governing Council has judged that any risks would be outweighed by the benefits of lower money market rates in channelling investors away from less risky assets.

The decisions today to cut the refinancing rate to a record low and to reduce the deposit rate to zero only partly reflect the extreme weakness of the Eurozone economy. They also stem from a need to respond to major problems in the functioning of the Euro area money market that is further weakening the economic outlook.  Transactions in the Euro area money market have become increasingly fragmented along lines largely determined by national boundaries.  Interbank activity has also reduced sharply in terms of the volume and maturity length of transactions.  As a result, changes in ECB policy rates don’t immediately or automatically flow through to bank funding costs nor consequently to the real economy.  Commercial banks will benefit to the extent that they fund themselves through the ECB’s refinancing operations.  However, in circumstances where the interbank ‘plumbing’ isn’t operating properly, adjusting the policy thermostat by cutting official rates may not prompt an immediate and equal change in borrowing costs for financial institutions and their customers.

These limitations such as these meant Mr Draghi was relatively downbeat as to the likely impact of today’s easing on the Euro area economy.  However, one channel through which today’s rate cuts could help is the exchange rate. The immediate impact of today’s announcement was a significant drop in the Euro on FX markets.  This may reflect the increasing attractiveness of the Euro as a funding currency in carry-trades.  However, today’s policy action is, as market reaction would suggest, not a ‘game-changer’.

We suggested in our analsyis last month that the June ECB Governing Council meeting could be regarded as a rather awkward holding operation.  In spite of reductions in policy rates to record lows the same might be said about today's meeting.  The fact that the ECB still recognises that risks to activity are to the downside and that Mr Draghi was also very dovish about inflation hints at a realisation that at very least an accommodative policy will need to remain in place for some considerable time.  Although there is some very limited scope to cut the refinancing rate further, any impact is likely to be very modest.  Instead, today’s immediate market reaction suggests it may not be too long before Mr Draghi is forced to set out what additional 'non-standard' measures the ECB might be willing to contemplate.