ECB Cuts And Suggests Further Easing Can’t Be Ruled Out

25 basis points in refinancing rate as expected but augmented by Draghi’s dovish tone.

• ECB open to further rate cuts if required— even to the possibility of negative deposit rates.

• Dovish rate comments reflect both the degree of economic weakness and the difficulty in agreeing unconventional policy measures.

• On balance, we think rates have bottomed but further 25 bp drop can’t be completely excluded.


Today’s decision by the European Central Bank to reduce its key refinancing rate by 25 basis points to 0.5% was widely expected. However, at the ECB’s regular monthly press conference Mario Draghi struck a somewhat more dovish tone than might have been envisaged and suggested that the ECB would be willing to ease policy further if economic conditions warranted such action. Importantly, he hinted that further easing would likely come through a further reduction in policy interest rates—even if that were to take the ECB’s deposit rate into the largely uncharted territory of negative values. Mr Draghi also suggested we shouldn’t expect any dramatic initiatives on measures to support SME lending anytime soon. Finally, he struck a conciliatory tone in relation to the prospect of some pullback in the degree of fiscal austerity in the Euro area. Rather than exhorting speedy and sweeping budget action as the ECB has consistently done in the past, Mr Draghi argued that countries ‘should not unravel their efforts to reduce general budget deficits’.

What Was Announced And What It May Achieve

The ECB announced a number of policy changes today. Understandably, most focus was on the cut in the refinancing rate from 0.75% to 0.5%. In addition, the marginal lending rate was cut from 1.5% to 1.0% while the deposit rate was kept at zero. While today’s decision had little impact on interbank rates, it will reduce the funding costs of banks that access the ECB’s Long Term Refinancing Operation and its Emergency Liquidity Assistance. In the future, the cut in the refinancing rate and the marginal lending rate may act to curb the pace of increase in market rates. In this regard, the announcement that the ECB’s regular weekly and three month refinancing operations will continue to be conducted at fixed rates and at full allotment up to July 2014 was obviously designed to complement today’s cut in the refinancing rate and to provide a measure of comfort in relation to access to ECB funding in the future. In themselves, these actions are unlikely to spark a dramatic change in economic and financial conditions. Although Mr Draghi shared one questioner’s ‘frustration’ at the difficulty in translating lower policy rates into easier credit conditions in the ‘real’ economy, he also expressed confidence that the degree of ‘fragmentation’ that had blocked interbank markets was showing clear signs of diminishing of late.

In justifying today’s decision to cut interest rates, Mr Draghi noted that beyond recent signs of poor economic conditions and easing inflation, two developments strengthened the argument for a policy change. These are accumulating signs that weakness in activity was n longer confined to peripheral economies but was becoming more evident in the Euro area ‘core’ and, importantly, a number of indicators that suggest some easing in financial fragmentation (or an improvement in the functioning of the ECB’s monetary transmission mechanism). In these circumstances, there was an increased justification for a rate cut and an increased likelihood that a policy easing would have its intended impact.

By suggesting that the ECB continues to see risk to the downside for economic activity that ‘in the period ahead, we will monitor very closely all incoming information’ and that the ECB ‘stands ready’ to act further, Mr Draghi’s remarks today struck a somewhat more dovish tone today than might have been anticipated. In part this is because it is clear that the risk around the ECB’s continuing expectation that ‘activity should stabilise and recover gradually in the second half of the year’ are far from symmetrical. Moreover, the continuing weakness of activity is increasing the risk that inflation may threaten to fall below rates consistent with the ECB’s target of an outturn ‘below but close to 2%’. In this regard, this week’s combination of data showing inflation falling sharply (although the ECB is probably right to expect a partial reversal of this drop in the months ahead), and unemployment rising relentlessly likely cemented the arguments in favour of an easier policy stance.

There has been a broad consistency in the policy actions of the ECB even if one might take issue with the overall stance of policy or the wisdom or otherwise of a number of tightening initiatives in the past. The somewhat mechanical nature of policymaking is indicated by diagram 1 which shows how the ECB has responded to changes in the relative importance of trends in inflation and unemployment (we calculate this ‘manoeuvre’ ratio simply by subtracting the prevailing Euro area inflation rate from the prevailing unemployment rate). This ratio suggests that further policy accommodation may be needed. Most forecasts envisage the trend in Euro area inflation continuing downwards (even if there may be some correction of April’s drop from 1.7% to 1.2%) whereas the trend in unemployment is increasing. This suggests some argument for easier policy than is currently in place. Against this backdrop, the thrust of Mr Draghi’s remarks today that there could be scope for even easier ECB policy if justified by economic conditions appears likely understandable. However, this raises the question as to how easier policy might be implemented in practice. 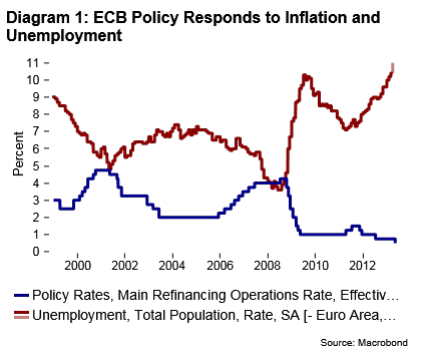 If we abstract from economic conditions there are three somewhat related obstacles to easier ECB policy. First of all, there is the ECB’s mandate that is somewhat more restrictive than that of many other central banks. Although the Draghi-led ECB has broadened the interpretation of this mandate somewhat in the past year or so, it still remains something of a constraint on ECB policy action. A second difficulty for Mr Draghi and his colleagues (and it should be remembered that there has been a substantial turnover in Governing Council members in the past couple of years) is the structure of the Euro area economy with its overwhelming dependence of bank-based financing. Yet another issue is the heterogeneity of financial markets across the Euro area that for example have made designing a specific instrument to support lending to SMEs (small and medium enterprises) hugely difficult to agree. A final consideration is a cultural dimension to policymaking that is significantly influenced by the historic experience of some key Eurozone countries. In that regard, it was notable that today’s decision to cut policy rates was not unanimous. Instead, Mr Draghi noted that there was ‘a very strong prevailing consensus’ to cut rates and within that number again a prevailing consensus for a 25 basis point reduction.

Additional Easing Likely To Take The Form Of Even Lower Rates

Taken together these various ‘structural’ restraints mean that ECB policy making must operate between relatively narrow tramlines. The recently leaked Bundesbank criticism of Outright Monetary Transactions (OMTs) limits any scope for any innovative use of this particular mechanism to boost activity and may even hint that OMTs are unlikely to become operational in anything other than the most extreme of circumstances. Today, Mr Draghi also downplayed any prospect of any dramatic early moves to support lending to SMEs. Instead, the press statement that the Governing Council ‘decided to start consultations with other European institutions on initiatives to promote a functioning market for asset-backed securities collateralised by loans to non-financial corporations’ suggests no early answer in respect to the immediate problems facing this important business sector.

Given these constraints, it is not wholly surprising that Mr Draghi hinted today that if additional policy support is required it is most likely to come through further reductions in the ECB’s policy interest rates even if this entails moving the deposit rate that the ECB pays on funds placed with it from zero at present into negative territory. Mr Draghi indicated that the ECB was technically prepared for such an eventuality and they would ‘address and cope with any unintended consequences [of such actions] if needed’. We should emphasise that it would likely take a substantial (and at this point still unlikely) deterioration in economic conditions to prompt such action. This would likely extremely problematic in practice, although there is a certain consistency in that policymakers would attempt to counter circumstances of deflation with negative interest rates.

Our best judgement at this point is ECB policy rates have reached their low point although the possibility of a further 25 basis point drop in the refinancing rate cannot be entirely excluded if conditions weaken significantly further in the next three to six months and inflation trends closer to 1% than 2%. A more dramatic recourse to negative ECB deposit rates would occur only in the context of a further economic downturn of ‘nuclear’ proportions.

A Subtle Change In ECB Thinking And Fiscal Policy?

If monetary policy leeway is curtailed, what does that imply for fiscal policy? In this context, we think that the tone of Mr Draghi’s comments today in relation to budget policy signal a significant if belated reflection of the risks that an excessive pace of fiscal tightening could have on a fragile Euro area economy. The relevant phrase in the ECB press statement is illuminating in a number of ways,

‘In order to bring debt ratios back on a downward path, euro area countries should not unravel their efforts to reduce government budget deficits…’

First of all, the focus on a growing debt/GDP ratio rather than a slightly declining deficit/GDP rate in the past year understates the degree of adjustment that has been implemented in the face of very weak economic conditions. So this wording is very much in line with the traditional hawkishness of ECB pronouncements on fiscal matters. Second, the reference to the average debt ratio for the Euro area as a whole, while appropriate to the ECB’s system-wide competence, ignores potentially critical differences in fiscal space between individual countries. Given the ‘traditional’ nature of these comments, the wording of the final portion of this particular phrase is quite surprising.

Simply stating that countries should not ‘unravel’ their earlier efforts seems an unusually limited ambition for the ECB in regard to fiscal goals. Indeed, this particular form of wording could be consistent with no further fiscal adjustment measures in the near term or possibly even some limited stimulus. Our judgement is that this interpretation might go beyond what many on the Governing Council might intend. However, it is entirely consistent with a growing view that where central bank policy rates are around zero, more of the responsibility for responding to very weak economic conditions should fall on the shoulders of fiscal policy. We wonder how much of a change in thinking is developing possibly even subconsciously in Frankfurt and what this might imply for the thrust of budget policy in Ireland and elsewhere for 2014 (particularly in the light of today’s April tax numbers that hint at an emerging undershoot in Irish tax revenues in recent months).