ECB acts to limit rising rates, but for how long?

Move prompted by assessment of financing conditions and inflation outlook

With risks to activity now seen as broadly balanced and a small uptick in core inflation in new projections, persistence of ECB stance could be questioned

Although any  major change in its policy stance remains a distant prospect, the European Central Bank (ECB) is finding it difficult to remain completely on the side-lines. Following today’s March policy meeting, the ECB’s Governing council signalled its intention to ‘significantly’ step up its pace of bond buying in the second quarter to prevent ‘a tightening of financing conditions’ that could weigh on the outlook for activity and inflation in the Euro area.

In the near term, this stance may restrain upward pressure on term rates and bond yields somewhat. Certainly, the market’s reading that Central Banks will not stand idly by and allow rates rise unchecked prompted a kneejerk if modest pullback in US as well as European yields in the immediate aftermath of the announcement. However, we are not entirely convinced that monetary policymakers will be entirely willing or able to aggressively oppose some element of adjustment in market rates to reflect changes in the outlook for economic growth and inflation globally.

The ECB’s decision to actively respond today to a recent firming in term interest rates contrasts with the limited verbal intervention taken by the US Federal Reserve but this reflects a marked contrast in momentum on either side of the Atlantic both in terms of economic developments and the rollout of Coronavirus vaccines.

While near term US economic growth is set to be substantially underpinned by a further $1.9 trillion fiscal package agreed by Congress yesterday as well as an easing in health concerns, today’s ECB press statement notes that persistently high rates of coronavirus (COVID-19) infection, the spread of virus mutations, and the associated extension and tightening of containment measures are weighing on euro area economic activity in the short term.

In these circumstances, the ECB likely felt that it needed to underscore its commitment to an ultra-accommodative monetary stance to avoid a potentially problematic scale and speed of increase in Euro area term rates taking hold.  Although the commitment to an increased quantum of bond-buying is unambiguously dovish, by committing to this for the second quarter of the year rather than leaving the timing open-ended, there may be some intention to emphasise its temporary nature.

In the same vein, the declared emphasis on ‘ preventing a tightening of financing conditions’ emphasises the move as precautionary and pre-emptive in nature rather than an effort to reverse the recent firming in rates.   The same sense of acting to check rather prevent market movements may be gleaned from the press statement’s observation that ‘ If sizeable and persistent, increases in these market interest rates, when left unchecked, could translate into a premature tightening of financing conditions for all sectors of the economy.’

A further qualifying comment in today’s statement notes that the increase in planned bond purchases was ‘Based on a joint assessment of financing conditions and the inflation outlook’. So, the ECB’s resistance to future movements in market rates will be significantly determined by inflation developments-and likely also by trends in growth. While today’s ECB statement also went to some length to play down an expected sharp near term pick-up in inflation, the time-bounded increase in the scale of bond-buying announced today allows for a re-assessment of circumstances in June that might prompt a different judgement that firmer rates could be completely consistent at that time with the maintenance of favourable financing conditions.

The ECB’s tolerance for firmer bond yields and term rates is and will continue to be determined principally by its assessment of economic conditions. Today’s new ECB staff projections entail a broadly unchanged outlook for GDP growth over the next three years. Compared to the December estimates, a negligible 0.1pt upgrade to 4.0% for GDP growth in 2021 is offset by a similarly sized downgrade to the 2022 figure to 4.1% while 2023 remains unchanged at 2.1%.

The ECB altered its assessment of risks to activity to broadly balanced. Within the detail of the projections, however, a healthier global economy is more influential in the year ahead as exports play a more important role in supporting Euro area growth. In contrast, the scale of recovery in consumer spending is revised materially lower to 3.0% from 4.3% previously with just over a third of that downgrade made good by stronger growth in subsequent years. So, the details of the projections suggest that ‘feelgood’ may be quite limited in the Euro area economy for much of 2021.

The most striking revision to inflation is the upgrade to the 2021 number to 1.5% in the new ECB projections from 1.0% in December. Most of that is explained by higher energy prices but underlying inflation is also seen higher in 2021 (at 1.0% against 0.8% previously). Importantly, ‘core’ inflation is also seen modestly higher now for both 2022 ( 1.2% v 1.0%) and 2023 (1.3% v 1.2%), with ECB simulations suggesting much of this boost could reflect spill-overs from the just confirmed US fiscal package.

The ECB’s estimate of headline inflation at 1.4% in 2023 is unchanged and still some distance below levels consistent with the ECB’s target of ‘close to but below 2%. That said, there is a sense in these forecasts of a small element of upward drift in underlying price pressures towards areas at last approaching those that some Governing council members would regard as satisfactory in the current environment.

Will they mind those gaps?

It may be worthwhile to draw out the link between economic conditions a bit further. As the diagram below illustrates, historically the trend in Euro area nominal GDP growth has been correlated with movements in the Euro area 10 year bond yield. Drawing on the new ECB projections (dotted lines) for growth in real GDP and inflation and the technical assumptions made in these projections about the path of 10 year bond yields, we see a significant  interest rate gap is envisaged in coming years, entailing interest rates falling well short of the path of nominal GDP. 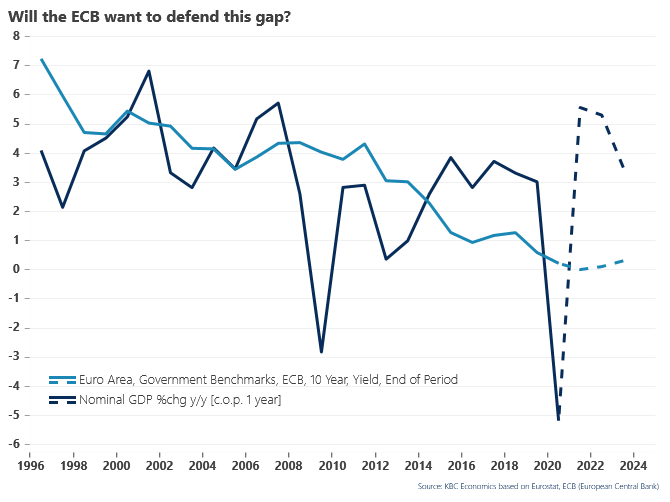 While it is important to caveat that the future path of interest rates in this diagram is simply a technical assumption made in the ECB projections, more fundamentally, it can be suggested that this sort of gap notably reflects a measure of compensation for the economic shortfall of recent years that prompted material output and inflation gaps.

The significance of output and inflation gaps for the ECB'S policy stance was forcefully articulated in an early March speech by ECB executive board member, Fabio Panetta, but it remains to be seen whether markets or possibly even a majority of ECB governing council members  will be willing to tolerate the sort of interest rate gap implicit in current ECB projections for a prolonged period of time.

Today’s announcement suggests in the short term at least, the ECB is determined to prevent any early or aggressive rise in term rates. However, it may not be long-particularly if, as expected, headline inflation spikes higher or the rollout of vaccines accelerates and restrictions ease- before markets and perhaps some ECB officials begin to question the persistence of that commitment.