Tapering continues as indicated with net purchases to end in December…

…but ECB wants to remain flexible

Governing council not discussing what happens next...as yet

There were few surprises from Mr Draghi today. Instead, the president of the European Central Bank signalled a determination to stay on a slow and steady path away from exceptionally accommodative policy at present. In brief, it appears that Mr Draghi’s main intention today was to avoid any suggestion that the ECB might slow down or speed up its plotted path towards a still distant land of more normal policy settings.

To emphasise that the economic progress now being seen will be maintained (as diagram 1 illustrates), new ECB projections paint a picture of an economy where growth is slowing but stays stronger than its historic average while core inflation picks up (again above its long term average) but does not threaten a breach of the ECB’s target. 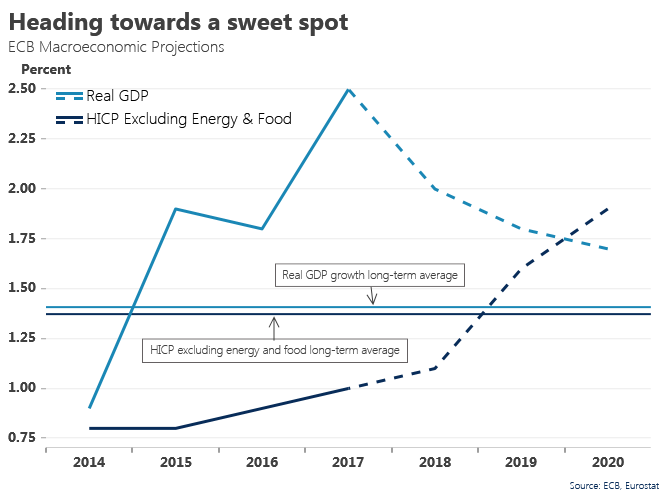 Although no major developments were expected from today’s, governing council policy meeting, there were some suggestions the ECB might slightly tweak its message today. Market concerns that the outlook for global economic growth may be darkening have increased in recent months and there have been suggestions that this might necessitate a slower exit from easy monetary policy than had been envisaged.

Acting in the opposite direction, Euro area headline inflation and wage growth have been somewhat higher than anticipated of late, raising the possibility that some ECB members of a more hawkish disposition might favour a somewhat faster exit.

Mr Draghi opted to follow a steady middle course today. While he did acknowledge both the risks of slower growth and signs of higher inflation, there was a clear intention to indicate that the ECB will not be easily moved from the course it has now charted.

Both because the ECB’s exit from exceptionally easy policy  is intended to be a lengthy process and because uncertainty and periodic disruptions such as recent turmoil in Turkey and Argentina are now integral features of the economic and financial landscape, it is not surprising that Mr Draghi was so keen to emphasise a message of ‘steady and slow’.

To reinforce this message, Mr Draghi shrugged off numerous questions asking for details in relation to the specifics of future steps in the exit process, repeatedly answering that such details hadn’t yet been discussed. Indeed, he further noted that the ECB hadn’t even discussed when they would discuss issues about reinvestment policy actions although he did signal that considerations by ECB committees on technical aspects might be undertaken by end-year.

If the main takeaway from today’s meeting was that the ECB wanted to firmly remain on the sidelines, there was confirmation that the ECB will reduce the monthly net purchases under its Asset Purchase Programme (APP) to €15bn from 30bn from next month. However, as this intention had been signalled back in June, anything other than this outcome would have come as a dramatic surprise. While the end of net purchases is still signalled for December, the ECB retain some measure of flexibility by continuing to signal that this remains ‘subject to incoming data confirming our medium-term inflation outlook’.

Today’s ECB press statement continues to signal that’.. .an ample degree of monetary accommodation is still necessary for the continued sustained convergence of inflation to levels that are below, but close to, 2% over the medium term’. Mr Draghi also continued to emphasise that monetary policy will remain very accommodative after the end of net asset purchases, citing the ECB’s re-investment policy, its enhanced forward guidance and the (low) level of interest rates.

For the moment, this remains a simple guarantee of ongoing support. In time, however, this same sense that policy is still extremely accommodative may be used by ECB hawks to justify an eventual pace of policy change that may be notably faster than markets now envisage. It should be emphasised that such a move is still some distance away.

While the ECB is very much in a holding position at present, its depiction of current economic conditions highlights developments potentially pulling in opposite directions while possible discontinuities between the press statement and new projections hint at a somewhat cumbersome compromise in assessing the likely outcome of these contrasting influences.

The ECB noted that ‘uncertainties relating to rising protectionism, vulnerabilities in emerging markets and financial market volatility have gained more prominence recently’.  As a result, the recovery is now characterised as ‘an ongoing broad-based expansion’ which should be seen as a clear if modest downgrade from July’s depiction of an economy on ‘a solid and broad-based growth path’.

These changes are reflected in a fractional pull-back of GDP growth projections for 2018 (from 2.1% to 2.0%) and 2019 (from 1.9% to 1.8%) while 2020 is still seen at 1.7%. The limited scale of these alterations is consistent with the generally positive tone of Mr Draghi’s remarks on the current health of the Euro area economy. While he ignored a question asking whether the output gap had been closed, he did indicate that growth would continue at a pace above the potential (i.e. sustainable) rate.

Mr Draghi added that employment and wage growth were now providing significant support to consumer spending. So, the broad message is that despite an uncertain environment, the Euro area upswing is continuing albeit less rapidly than appeared likely at the start of the year. (On a technical point, outsized second quarter Irish GDP growth data released today might be expected to raise the previous estimate of growth for the Euro area as a whole by 0.1-0.2%).

While the tone of today’s ECB comments on inflation were a good deal more confident about an emerging increase in price pressures, this hasn’t been reflected in an upward revision to its inflation projections.  The opening press statement sprinkles a couple of references to wage growth in support of an increased conviction in the expectation of ‘gradually rising inflation’. While Mr Draghi spoke of ‘significantly stronger core inflation’, the new projections envisage marginally lower core inflation than their June counterparts at 1.5% in 2019 (previously 1.6%) and 1.8% in 2020 (previously 1.9%).

Although the new projections cite a restraining impact on inflation from marginally weaker activity, this sits uneasily with the tone of ECB commentary on current momentum in wages. As diagram 2 below indicates, a marked acceleration in wage growth of late might hint at a stronger trajectory in core inflation than previously envisaged. 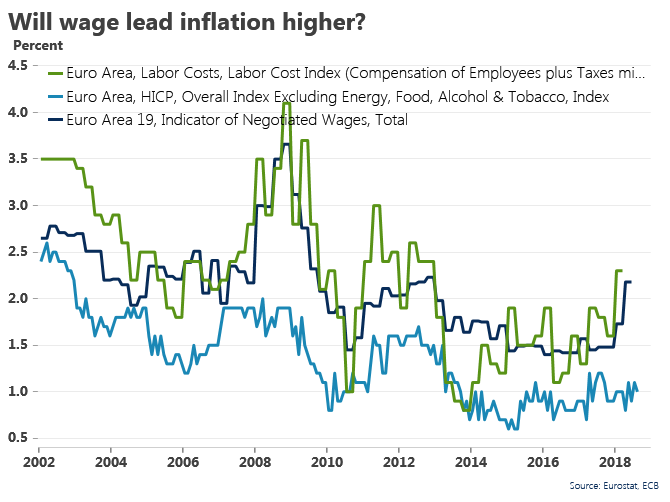 A conspiracy theorist might suggest the downward tweak to the outlook for core inflation relative to the projections of three months ago is a particularly fortuitous development as a slightly lower core inflation forecast means that the headline rate doesn’t have to be adjusted up from 1.7% to the roughly target level of 1.8% (to take account of the projections’ incorporation of higher gas and electricity price as well as the impact of a lower Euro on oil prices).

From a market perspective, there is little of immediate importance in today’s ECB pronouncements. The clear message is that the exit process from ultra-accommodative monetary policy will be slow and steady. At the margin, the increased confidence in a sustained increase in inflation could eventually spell the way towards an eventually faster pace of exit from easy policy. However, that is not an issue for today.

In the same vein, the continuing lack of clarity around many technical dimensions of the exit process ranging from details around the re-investment policy to the prospective size and nature of the corridor around the ECB key policy rates during the exit process are issues which could make that process more complex than it needs to be.