Rise in confidence reverses only half of the deterioration felt in Dublin in late 2016...

…but worries about economic outlook are notably greater in capital

The regional breakdown of Irish consumer sentiment data shows a broadly based and similarly scaled increase in confidence across the country in the first quarter of 2017. However, the details tend to emphasise clear differences in the ways in which consumers in the capital and those in the rest of Ireland see their economic circumstances at present.

In the case of Dublin consumers, the recovery in sentiment in early 2017 only reversed about half of the sharp deterioration seen in the previous quarter, while for consumers outside the capital, recent gains put confidence close to the highs that were seen in late 2015. 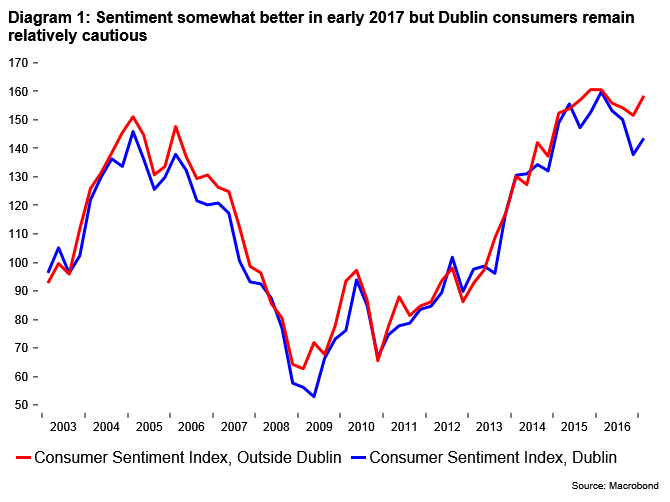 In both instances, the latest reading suggests a broadly positive outlook prevails at present, and implies some easing in the worries that marked the late 2016 results. However, the most recent reading suggests Dublin consumers remain notably more cautious than consumers in the rest of the country. We think this reflects a greater sensitivity to external risks to the Irish economic outlook on the part of consumers in the capital.

The main driver of better consumer sentiment in early 2017 both in Dublin and elsewhere was a less nervous view of household finances. As diagrams 2 and 3 indicate, this improvement reflected healthier readings both in relation to the trend seen through the past twelve months and the outlook for the next twelve months. 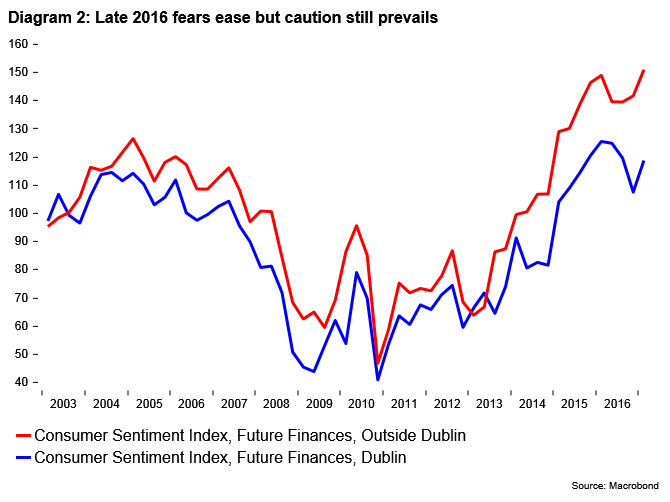 As these diagrams suggest, the uptick in areas of personal finances was slightly greater for Dublin consumers than for those in the rest of Ireland. Fears of a sharp worsening in household financial conditions that particularly concerned Dublin consumers in late 2016 have not materialised, prompting a ‘relief rally’ in this element of the survey. 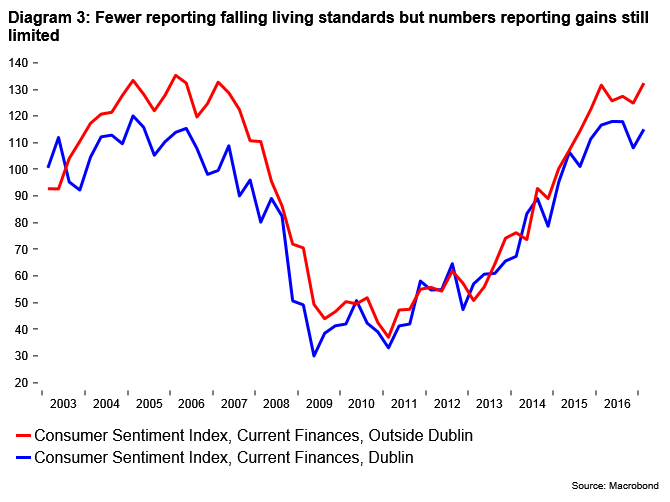 It should be noted that the improvement in consumers’ perceptions of their personal financial circumstances was primarily driven by a drop in the proportion of consumers reporting deteriorating conditions rather than any marked increase in numbers indicating gains in their spending power.

While this implies some easing in ‘feel-bad’, it is unlikely to prompt the emergence of any pronounced ‘feel-good’ factor that would spark notably stronger levels of spending, although the survey suggests some modest recovery in spending plans after a pronounced step back in the previous survey.

Although sentiment improved among Dublin consumers in early 2017, concerns about the economic outlook continued to increase of late. In contrast, there was a slight strengthening of views on the economy on the part of consumers across the rest of the country in recent months. Diagram 4 gives a strong sense of how much consumers in the capital have scaled back their optimism in regard to Irish economic prospects since early 2015. 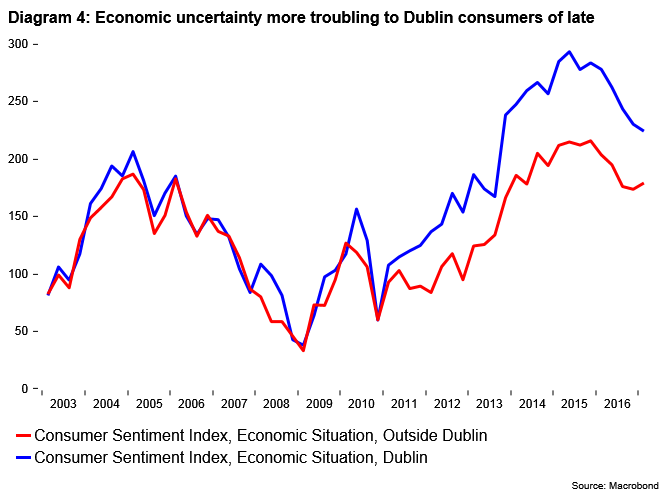 Our judgement is that a notable change in Dublin consumers’ views of the broader Irish economy initially reflected the failure of a strong recovery in GDP to translate into corresponding gains in the circumstances of the typical household in the capital.

More recently, however, worries about a potentially substantial adverse impact from ‘Brexit’ as well as possible changes in US economic and tax policy may be a particular concern because of the importance of trade and multinational activities to the capital.

While consumers in other parts of the country are clearly aware of such risks, the direct implications may be less threatening and, in many instances, signs of a broadening of the recovery in domestic spending of late may be have an offsetting impact on their assessment of the economic outlook.