Dublin Consumer Sentiment recovered solidly in the final quarter reversing a good deal of the weakening reported in the previous three months.

Confidence among consumers in the rest of Ireland also increased in the final three months of 2015, continuing its steady improvement evident through recent quarters.

Current readings suggest the broad trend in consumer sentiment is positive both in Dublin and in the rest of Ireland although somewhat uneven readings also suggest a significant element of caution on the part of the average Irish consumer. Encouragingly, views on household finances are becoming more positive.  So, consumers may be sensing a strong domestic economy is beginning to have some positive impact on their personal circumstances.

The 4th quarter readings suggest consumers across the country are only marginally more optimistic about the outlook for the Irish economy. This could owe something to increased uncertainty about the global outlook of late. This would appear consistent with a measure of caution among consumers in terms of their spending plans-particularly in Dublin, an outturn that may also reflect on-going pressures on living costs such as housing that is more pronounced in the capital.

The somewhat stronger improvement in sentiment on the part of Dublin consumers in late 2015 likely reflects a correction after the weakness of the previous quarter. The survey hints at continuing differences in the nature, pace and stage of recovery in the capital and elsewhere. However, a broadly improving trend across the Irish economy and the emerging upswing in domestic spending in particular suggests these differences in consumers’ assessments of their economic circumstances may diminish somewhat in coming quarters. 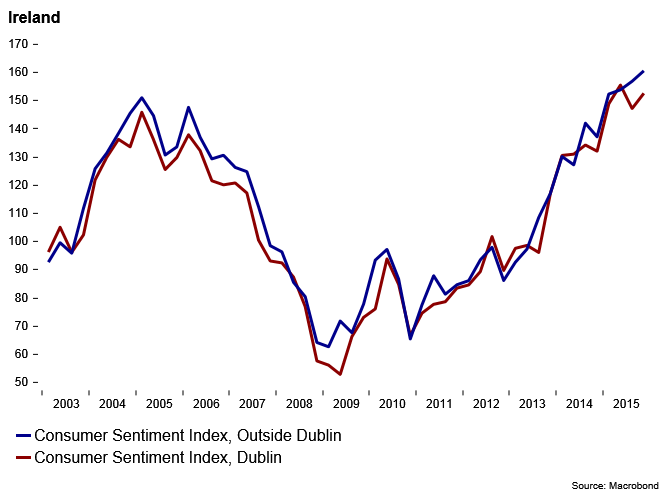 What Does A Strong Irish Economy Mean For The Average Consumer?

Household Finances On The Mend But Consumers Still Cautious About Spending 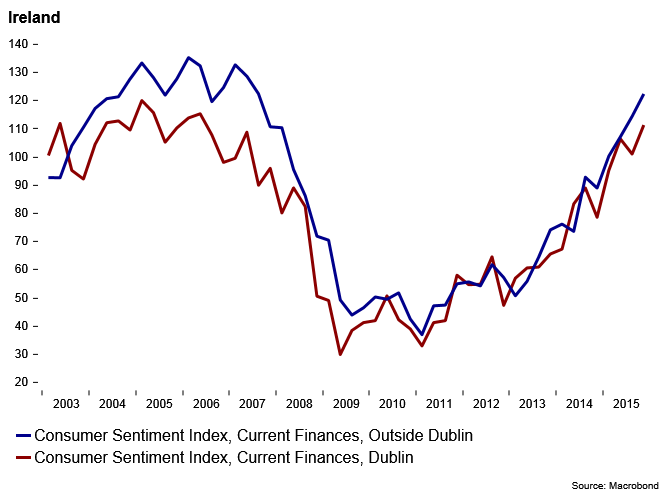