ECB extends bond-buying until September 2018 at a reduced rate

Today’s decision by the ECB to extend its Asset Purchase Programme by nine months at a reduced monthly pace of €30 billion had been widely expected. However, the tone of ECB president Mario Draghi’s explanation of this decision was probably more dovish than expected and implies the ECB expects to maintain a very accommodative stance of monetary policy for the foreseeable future.

Draghi errs on the side of dovishness

Our strong sense is that Mr Draghi wanted to avoid an adverse market reaction that would likely have followed any indication that today’s decision was effectively the last instalment in ECB quantitative easing. The ECB has previously signalled its concern that misinterpreted comments could lead to a premature tightening in financial conditions. This may have pushed him a little too far in the opposite direction. Market thinking on ECB policy is unlikely to change materially in the near term but it will be interesting to see if or when it might be challenged by the continuing build-up in momentum in the Euro area economy.

The clear inference from Mr Draghi’s comments today was that ECB bond buying would not come to an abrupt end in September 2018. By extension, given the repeated ECB assertion that it continues to expect its key policy interest rates ’to remain at their present levels for an extended period of time, and well past the horizon of our net asset purchases’, this would imply the ECB doesn’t  currently envisage raising interest rates until well into 2019 at the earliest.

Markets have been primed for indications of ‘lower for longer’ in ECB commentary and there was little expectation of any hawkish tilt in today’s decision or explanation.  However as Mr Draghi’s pronouncements today point towards a further albeit modest delay in the expected timing of any initial tightening of monetary policy in the Euro area, the exchange rate of Euro softened and market interest rates edged lower.

APP extended to September …and beyond?

The most notable decision announced today was that the ECB would continue its Asset Purchase Programme (APP) beyond the mooted end date of December 2017. This extension was universally expected. A series of media reports quoting ECB sources had also largely prepared the market for a reduction in the monthly purchase volume from €60 billion at present to a €30billion pace between January and September next year.

Importantly, Mr Draghi indicated that this ‘recalibration’ of the monthly pace of bond buying shouldn’t be seen as a step towards ending the APP. He emphasised that the adjustment shouldn’t be seen as ‘tapering’, noting that particular word had not been used in council deliberations. Instead, he suggested this ‘downsize’ was a consistent response to improved economic conditions.

Mr Draghi also emphasised that the APP was not going to stop suddenly, repeating that ‘it has never been our view that it should stop suddenly’.  This would imply that a further ‘recalibration’ might be envisaged for the final months of 2018 and possibly beyond, leading to the possibility that Mr Draghi might retire (his term as ECB president expires in October 2019) before any marked tightening of monetary policy occurs.

Mr Draghi also noted that a strong majority on the governing council favoured keeping the programme open-ended and, in response to a question, stated that the ECB had no ‘ceiling’ in mind for the APP. He strongly argued that the programme had sufficient flexibility to handle widely felt market concerns that the ECB might face technical difficulties sourcing sufficient bonds to continue purchases through the coming year.

These various comments are likely to encourage the view that today’s ‘recalibration’ might not be the last and this could weigh further on the Euro and interest rate markets. However, as we discuss below such forward guidance has to be seen in the context of a growth spurt in the Euro area that may have further to run.

As today’s decision will result in the stock of the APP increasing materially in 2018, it should properly be seen as a further easing by the ECB. However, as it was widely discounted and most commentary has focussed on the cut in the amount of monthly purchases rather than the extension of the programme, the additional support to an already healthy Euro area recovery has attracted little attention

The ECB also re-stated today that it would continue to reinvest the principal payments from maturing securities purchased under the APP. While it doesn’t represent any shift in ECB policy, as this approach was signalled as far back as 2015,  Mr Draghi suggested today that such reinvestments were ‘going to be massive’ , with ECB vice-president Constancio  suggesting they would come to ‘many billions’.

This will ensure the stock of assets purchased by the ECB continues to rise significantly through 2018 and, on some estimates, the reinvestment could add as much as €15 billion to average gross monthly purchases. However, as Mr Constancio indicated, the amounts re-invested could vary considerably from month to month.

By ensuring the stock of APP will continue to increase in the coming year, the reinvestment of maturing bond purchases contributes to a further easing in ECB policy.  Mr Draghi likely sought to emphasise the continuation of the ECB’s current reinvestment policy today to underline the contrast with the Fed’s recently announced intention to begin to reduce its balance sheet. The resultant difference in monetary stance might be expected to influence currency trading and thereby help limit the possibility of a rising Euro that undoubtedly represents the risk identified as ‘developments in foreign exchange markets’ mentioned in today’s opening press statement.

The ECB also signalled today that it would continue to operate its main liquidity operations on a ‘fixed rate full allotment’ basis. While this is largely technical, it is important in that it should ensure the persistence of favourable liquidity conditions in Euro area money markets in coming years.

When questioned, Mr Draghi indicated this decision had no implications for the level of interest rates although it could be speculated that retaining this approach would make it easier to ensure an orderly adjustment of market rates to an eventual rise in policy rates. More generally, regardless of the monetary stance, there is a widely held view that Central Banks are likely to be slow to move from current practices such as this that provide increased certainty in relation to the provision of liquidity to money markets.
Is ECB policy at odds with an improving economy?
Our sense is that the main takeaway for markets from today’s ECB meeting is likely to be one of ‘lower for even longer’ although any extension of the timeframe for easy policy will probably be seen as modest rather than major.  This is largely because the Euro area economy is showing signs of exceptionally fast growth at present and this should eventually translate into higher inflation.

While most focus today was understandably on the decision to extend the APP, the ECB struck an increasingly positive note on the Euro area economy. The opening press statement refers to ‘unabated growth momentum in the second half of this year’ while Mr Draghi also noted how well the economy was performing at present. Wednesday’s better than expected IFO survey for Germany is the latest in a range of indicators to hint that momentum could build further and push Euro area growth even higher to a point where now largely dormant price pressures might quickly emerge. 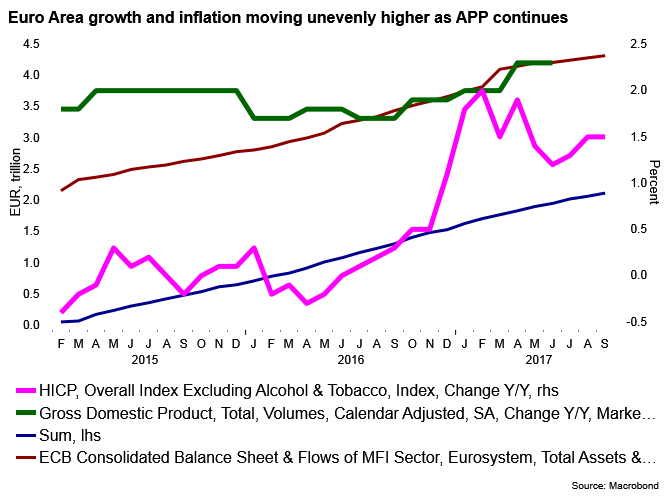 As the diagram above shows, an uneven pick-up in Euro area growth and inflation has coincided with a dramatic step-up in the ECB’s APP from an initially envisaged level of just over €1.1 trillion to €2.2 trillion today and after today’s decision close to €2.6 trillion in just under a year’s time. Our sense is that this significant stimulus has contributed materially to the substantial improvement in the Euro area economy now underway even if debate continues as to exactly how such quantitative easing might work.

The trajectory now envisaged for the ECB’s APP relative to those in Euro area activity and inflation could become notably less compatible as 2018 develops. Such a prospect may appear remote in coming months as base effects are expected to push down on headline inflation. However, such technical influences might quickly give way to a firmer trend in inflation on foot of stronger growth and improving sentiment that should feed through to wage and price setting.

Today’s ECB decision likely brings a period of calm in the near term and it is likely that Mr Draghi’s comments were significantly influenced by a desire to avoid the unfavourable market reaction that would have followed if, instead, he had indicated that today’s measures represent the last instalment of ECB quantitative easing. However, it is widely expected that robust growth will continue and there is also a strong likelihood that the ECB’s December projections will show signs of the required sustained adjustment in the path of inflation within the new forecast period. In that event, markets might begin to consider whether the current projected path for ECB monetary policy is sustainable.