ECB president Mario Draghi had two clear and related messages for markets today. The first is that the ECB is increasingly confident in the strength and durability of the current upswing in Euro area growth and attributes a significant element of the momentum in economic to ECB policy support.

The second is that because inflation remains subdued, even with this improvement in activity, there is no reason to contemplate any early reduction in the current  ‘very substantial degree of monetary accommodation’  being provided by the ECB. Indeed, the ECB would be willing to ease again if conditions deteriorate although that is now deemed less likely as upside and downside risks to activity have become more balanced with the progress of the recovery.

These two messages are more dovish than many had expected but not dramatically so. As a result, there was no major market reaction although term interest rates softened marginally while the exchange rate of the Euro eased slightly.  There is a general sense in markets that tough and potentially divisive decisions on ECB policy won’t be needed for another three or six months. So, today’s decision to kick those particular cans down the road isn’t entirely surprising and could still be consistent with a range of different outcomes by end-year.

The tone Mr Draghi adopted today is clearly intended to limit market speculation about the possibility of any major change in ECB policy being signalled at the next major ECB policy meeting in September (the next press conference meeting on July 20th was never regarded as a likely date for significant policy pronouncements).  In turn, this will encourage the view that decisions regarding the Asset Purchase Programme scheduled to run until at least the end of this year and the future course of ECB policy rates will take longer to translate into a meaningful change in the ECB’s current policy stance.
In principle, the primary reason for Mr Draghi’s relaxed message today was the ‘Goldilocks’ picture of the outlook for the Euro area painted by the ECB’s new projections. These suggest that economic growth up to 2019 will remain robust, with growth revised up (albeit by a marginal 0.1%) in each of the three years. 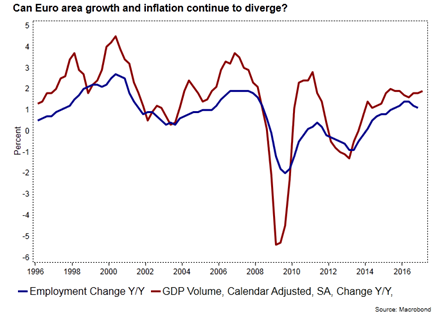 Healthier activity is seen delivering a fractionally lower unemployment rate than foreseen three months ago (8.3% v 8.4% in 2019). However, underlying inflation is expected to be slightly lower (by 0.1%) in both 2018 and 2019. Importantly, this means the new projection for 2019, at 1.7%, is a shade below levels Mr Draghi described previously as meeting the ECB target of ‘below, but close to, 2%’.

Today’s new projections formalise the distinction drawn by Mr Draghi at the previous ECB press conference in late April between strengthening activity and subdued inflation in the Euro area of late.  As diagram 1 below indicates, the current divergence between strong growth and subdued inflation in the Euro area is unusual but not unique. The key question is whether the ECB thinks it will be sustained.

It is notable that on two previous occasions, somewhat stronger spikes in growth prompted an eventual ECB response in the shape of higher policy rates. It may well be that the chastening experience of unwise rate hikes in the Spring of 2011 are informing the current ECB perspective but it is likely that a more fundamental questioning of the link between stronger activity and higher inflation is also taking place.

Looking through the impact of volatility in food and energy costs, price pressures have been largely absent for some considerable time. ‘Core’ inflation in the Euro area has now been below rates consistent with the ECB’s definition of price stability since August 2012.  In the US, where economic recovery has been longer and stronger, core PCE inflation, has been below the Federal Reserve’s target of 2% since March 2012.

A key question is whether this diminished pass through is permanent or merely prolonged by the aftermath of the crisis. Today’s projections do not provide a definitive answer. . Our interpretation of Mr Draghi’s frequent request for ‘patience’ in relation to policy hints that the ECB sees the transmission from growth to inflation as delayed rather than broken.

With the recovery in the Euro area only emerging from a tentative stage and core inflation, as Mr Draghi repeatedly emphasised today, largely unchanged for some considerable time, it makes perfect sense for the ECB not to pre-commit at this point.

It should be emphasised that Mr Draghi’s ability to remain non-committal will diminish notably between now and end year. In a practical sense, the scheduled December end of the Asset Purchase Programme means intentions in this regard to will need to be signalled most likely by September (or October at the latest).

It should also be noted that the December economic projections will extend to 2020. In the absence of a marked softening in growth or a clear consensus that the link between activity and inflation has altered materially, it is difficult to imagine that the December projections (and perhaps even those in September) will not show inflation returning to levels consistent with the ECB’s target. That could provide the basis for the start of a reduction in ECB accommodation.

In that event, only a modest uptick in core inflation would likely be required to signal a measure of ‘convergence’ towards the ECB’s inflation goal. Moreover, as the current projections assume the end of the Asset Purchase Programme at the end of this year (as well as current market expectations for slightly firmer market interest rates), even today’s forecasts may imply that the pick-up in inflation is self-sustaining.

Our sense is that a number of arguments can be made for Mr Draghi’s relatively dovish tone today. Probably the most straightforward is that the ECB is still unsure that inflation will move towards its goal in the next year or so. In this context, the softness of recent inflation readings likely strengthened the position of the ‘doves’ on the ECB Governing council.

A subdued inflation outlook together with a still ‘youthful’ Euro area economic recovery might imply, as ECB vice-president Constancio previously indicated, that the ECB might judge that the costs of acting too soon may be greater than the costs of acting too late. This argument also implies a need to prevent market interest rates or the exchange rate of the Euro from rising pre-emptively and, consequently, emphasises the importance of a dovish tone to ECB pronouncements.

If this reading is correct, it implies there may be more scope for the ECB to move to a somewhat different position over the balance of the year. A wide range of developments have the potential to contribute to a subtle but significant re-assessment. These include the continuation of robust activity for another quarter, a slight pick-up in core inflation, various financial stability considerations, a quieter political backdrop and technical constraints on the operation of the Asset Purchase Programme as well as deep divisions on the Governing council as to its appropriateness. Some or all of these might argue a little louder in the second half of 2017 for a clearly smaller degree of monetary accommodation.

By distancing any change in ECB policy, today’s pronouncements might be expected to have a calming influence on markets through the summer months The problem is that today’s dovish tone from Mr Draghi may be interpreted as signalling what he recently described as ‘an extraordinary amount of monetary policy support’ as effectively permanent rather than temporarily extended. In that event, a quiet summer might give way to a stormy autumn.