Draghi suggests no change in ECB thinking in spite of softer data and nervous markets; keep calm and carry on

Draghi suggests Italy not an issue for ECB and signals no special support can be expected; will this add to pressure on Rome?

ECB says little has changed in spite of market nervousness. So policy path remains the same

Very little was expected from today’s ECB policy meeting and press conference and the lack of significant market reaction to Mr Draghi’s pronouncements suggests very little was exactly what was delivered.  However, against a backdrop of nervous markets and an increasingly uncertain economic outlook, the ECB may well feel the lack of any notable market reaction represents a job well done.

With net monthly purchases under the Asset Purchase Programme scheduled to end in December and key policy rates predicted ‘to remain at their present levels at least through the summer of 2019..’, the overwhelming sense in markets is that the ECB is set to remain on the side-lines for some considerable time.

However, the immediate backdrop to today’s meeting did add a little more interest to proceedings. The recent turmoil in equity markets, heightened concerns about the outlook for Italian fiscal policy and the trajectory of that economy as well as increasing nervousness about the course the UK’s withdrawal from the EU might take all contributed both to notably more volatile trading conditions of late as well as increased downside risks to the Euro area economy.

In these circumstances, Mr Draghi’s repeated message that ECB thinking on economic prospects and the related policy outlook hasn’t changed materially likely reflects the consensus view of the Governing council but it may also owe something to a strong desire not to frighten the horses and aggravate market turmoil by suggesting that the ECB shares investors current worries to any material degree.

Instead, there was a strong determination to signal that economic and financial conditions remain sufficiently healthy to warrant the ECB remaining on its current course towards a gradual and predictable reduction in the degree of policy support it now provides. In addition, Mr Draghi continued to emphasise that this process would still leave ECB monetary policy significantly supportive for the foreseeable future.

Although Mr Draghi readily acknowledged that recent data was ‘somewhat weaker than expected’, he went on to provide a fairly lengthy list setting out why the ECB believed ‘a broad-based expansion of the euro area economy’ was likely to continue. The wide range of explanations offered to allay concerns about slower growth of late is likely intended to ward off any suggestion that the Euro area recovery is under any significant threat.

Mr Draghi noted that the pace of growth was now normalising from the exceptional pace seen through 2017 and this reflected a return to more usual export performance. As a result, the recent slowdown, illustrated by the softening in PMI data shown in diagram 1 below, should be seen as signalling weaker momentum towards a more sustainable pace rather than a downturn. 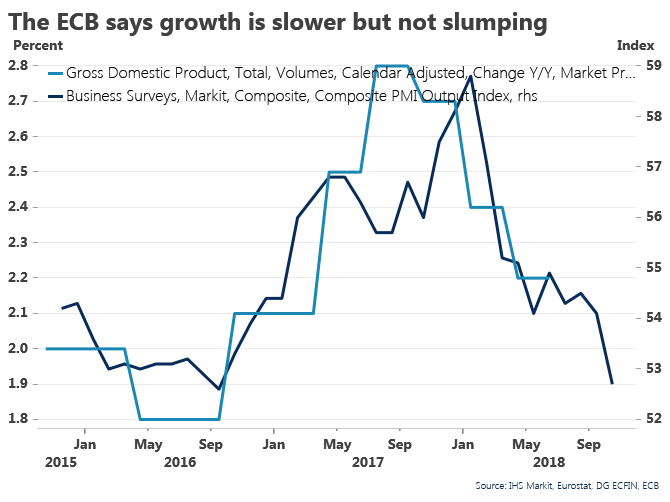 Mr Draghi added that specific and temporary factors such as weakness in German industrial production caused by difficulties that country’s car manufacturers had in adapting to new EU-wide emissions tests for new vehicles exaggerated the measured softening in economic conditions of late.

The ECB president further added that expansionary and, in some instances, pro-cyclical fiscal policy would support activity further and this should ensure domestic demand remains robust. Importantly, improving domestic demand is also seen sustaining healthy employment growth and ensuring the persistence of a pick-up in wage inflation that Mr Draghi emphasised was permanent rather than temporary in nature. For these reasons, Mr Draghi concluded that risks around the outlook for activity were still broadly balanced rather than now tilted to the downside.

Together with a high level of capacity utilisation, the current positive momentum in wages is seen delivering an increase in underlying inflation, in time, that would ‘gradually’ bring it in line with the ECB’s target. As diagram 2 below illustrates, the trend decline in unemployment and recent acceleration in wage growth might also be expected to provide some further impetus to domestic spending that might offset some external risks to Euro area growth. 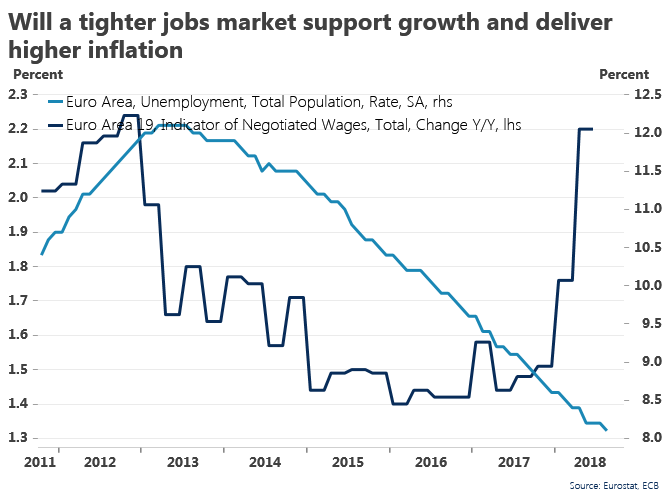 Although Mr Draghi offered a strong defence of the ECB’s current assessment and policy intentions, he also indicated that these would be reviewed in the light of new economic projections which the ECB will release at its next policy meeting on December 13th. So, Mr Draghi has preserved a significant measure of wriggle room. He repeatedly said that the Governing council had not discussed what it would do next but indicated that the ECB had a policy toolbox that was quite ‘rich' in terms of a capacity to deal with any downside risks that might materialise in the future.

While there was no expectation of any major shift in ECB thinking on monetary policy today, there was substantial interest in Mr Draghi’s assessment of developments in Italy. His reflex refusal to offer any significant view beyond the indication that a solution could be found contrasted starkly with additional comments that suggest there has been a lengthy but largely confidential consideration of the potential impact of Italy’s altered fiscal course on ECB policymaking.

Mr Draghi adopted the usual defence of indicating there had been no material discussion of Italy at today’s meeting, adding that current travails were a ‘fiscal discussion’ . However, he went on to say that any contagion appeared limited and that some signs of spill-over in terms of higher yields in other countries might be a reflection of specific issues in these countries and, consequently, not a signal of the spread of Italian woes across the broader Euro area. As diagram 3 below illustrates, the current spread between Spanish and German bond yields is not threatening by historic standards and the Euro area has long been capable of withstanding the headwinds from sub-par Italian growth. 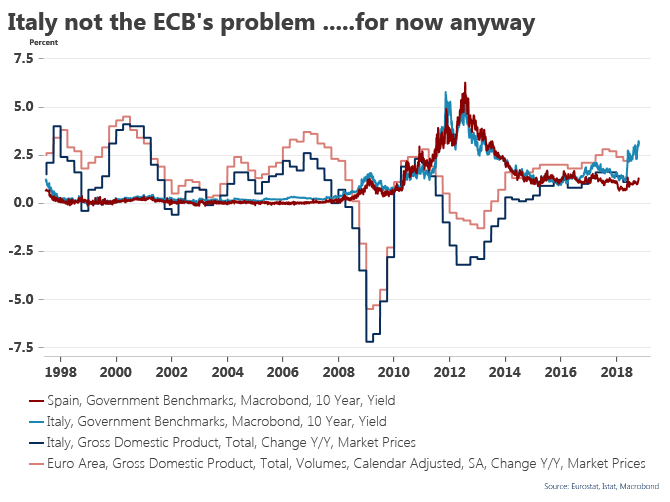 More notably, Mr Draghi suggested that in the event of seriously increased turmoil, Italy would have the option to access Outright Monetary Transactions (the support mechanism announced by the ECB in 2012 but never utilised).  Of course, as this would imply participation in an EU/IMF support programme and adherence to that programme’s fiscal requirements, it is most unlikely to represent a feasible course of action for the Italian government.    Mr Draghi also pointedly noted that financing government budget deficits was not part of the ECB’s mandate, further emphasising that adjustments would need to occur in Rome rather than Frankfurt.

In response to another question, Mr Draghi indicated that while the ECB was not party to Brexit negotiations, it was working closely with the Bank of England to guard against major technical fallout in the financial system that might result from the UK’s departure from the EU. Again, he indicated confidence that any such stability risks could be managed at a technical level. However, he also noted that in the absence of a speedy agreement of a withdrawal deal, the private sector would have to begin to make preparations for a hard and disorderly Brexit. This, he suggested was likely to be costly in terms of economic and financial disruption and, consequently, highlighted the need for a solution that minimises such risks.

The main task for Mr Draghi today was to sound calm and emphasise continuity in ECB policy.  He achieved this by emphasising the positive in terms of the Euro area economy and the accommodative in terms of future ECB policy changes. He avoided what was, arguably, the major misstep he might have made today which would have been to indicate heightened concern about slowing economic growth in the Euro area-an assessment that would heightened market nervousness .

By continuing to emphasise a predictable and slow path of policy normalisation, the ECB may hope to limit volatility in Euro area interest rate markets. A notably more dovish tone from the ECB than the US Federal Reserve, which reflects notable differences in economic momentum in the two zones at present, may also weigh on the Euro in the near term.

Although Mr Draghi didn’t say anything too surprising about Italy, his tone did send a clear message to Rome that the ECB doesn't see any role for itself in easing pressure on Italian bond yields. This may encourage the market to test the pain threshold for Italian bonds.