Consistent and almost continuous European Central Bank (ECB) messaging through recent weeks meant there was almost universal expectations of significant policy changes at today’s policy meeting of its Governing Council. As has often been the case, the package of measures announced by the ECB today fell towards the lower end of the range of market thinking in terms of scale, scope and length of support.

What is  the ECB trying to achieve?

As a result, market thinking is likely to continue to romance the possibility that a further policy easing may be required at some stage in 2021-and this is not an entirely unlikely prospect.

Sustaining that possibility and avoiding a potentially major shift in market expectations may well be the most supportive stance the ECB could have taken today, although, as we discuss below, it can’t be definitively ruled out that this result is more the product of accident rather than design.

If the ECB had implemented a much larger policy package today, markets might have seen today’s actions as the ‘last’ ECB easing and started to contemplate, however distant it might be, the path by which current accommodation might eventually (and gradually)  be removed.

Avoiding a disorderly shift in market thinking and an associated step-up in rates is crucial to ensuring the preservation of favourable financial conditions which, as ECB president, Christine Lagarde, repeatedly noted today, is the central focus of ECB policy at present.

That sustaining favourable financial conditions rather than easing materially further was the ECB’s main focus today had effectively been pre-signalled by ECB executive board member, Isabel Schnabel, who in an interview at the start of this month stated that ‘Given the high degree of uncertainty we’re still facing in the economy and the already very favourable financing conditions, I think it is appropriate to focus on preserving these conditions rather than easing much further. Duration is the crucial aspect. Markets, firms and households need to understand that we will be there for as long as necessary.'

As suggested above, it is not entirely clear that the policy package announced today was designed solely to achieve the goal of keeping markets travelling hopefully rather than feeling they might soon arrive at a turning point. Some elements instead look like the product of a familiar compromise between very different stands of thinking within ECB policymaking.

If extending the duration of support had been the dominant consideration, the likelihood is that the Pandemic Emergency Purchase Programme (PEPP) would have been extended at least a full twelve months rather than nine months. In the same vein, the €500bn increase in the size of the programme for nine months looks adequate rather than ambitious when set against that programme's current €1350bn scale (and roughly fifteen month time-frame) as well as the end of a temporary €120bn step-up in purchases under the Asset Purchase Programme this month.

Tellingly, whereas previously it was envisaged that the PEPP would be fully utilised, Mme Lagarde indicated that in terms of future asset purchases under this programme ‘We will purchase flexibly according to market conditions and with a view to preventing a tightening of financing conditions’. While the ECB president did add that purchases could be scaled up if necessary, there is a strong sense that the additional €500bn PEPP envelope announced today represents an upper limit rather than a targeted amount.

The other major initiative undertaken by the ECB today is the twelve month extension of favourable interest rate terms on its Targeted Long Term Refinancing Operations (TLTRO’s) to June 2022 and the announcement of a further three tranches of TLTRO’s between June and December 2021. Again, these decisions, while helpful, in terms of duration and scale seem to have matched the lower end of market expectations rather than been pitched at signalling longer or larger than envisaged support.

The ECB also modestly increased the capacity of banks to borrow at future TLTRO’s from a previous 50% of their stock of eligible loans to 55% but countered this by adding new lending targets to benefit from the more favourable terms.

Today’s adjustments to TLTRO’S emphasise the policy focus is very much on the banking system as a conduit for sustaining credit to the real economy and, as such, doesn’t entirely chime with the tone of concerns about the sector itself expressed in the recent ECB Financial Stability Review or a range of other ECB comments. Not surprisingly, this stance also meant that there was disappointment for some market expectations of an increase in the multiplier on commercial banks excess reserves that are priced at the refinancing rate.

If the scale and scope of today’s policy adjustments were slightly  less than generally envisaged, it may be that markets didn’t sufficiently focus on the repeated ECB phrasing in advance of today’s measures that they would constitute a ‘recalibration’ that implied a modest technical adjustment rather than any marked change in stance. That said, the market was likely focussing on the prospect of lengthy recovery process and the prospect of prolonged period of subdued inflation.

Although the current outlook is exceptionally uncertain, it may be that ECB expectations for the Euro area economy and inflation again err on the side of optimism. The new ECB projections published today reflect expectations of a solid and sustained recovery in activity and the jobs market in coming years.

In the same vein, the new ECB projections for inflation envisage only a slightly weaker path for inflation through the next couple of years than previously. Moreover, as the diagram below illustrates, the path envisaged for inflation one year, two years and three years forward is now only modestly below the corresponding (but pre-pandemic) path for similar future time-frames envisaged in projections made a year ago. 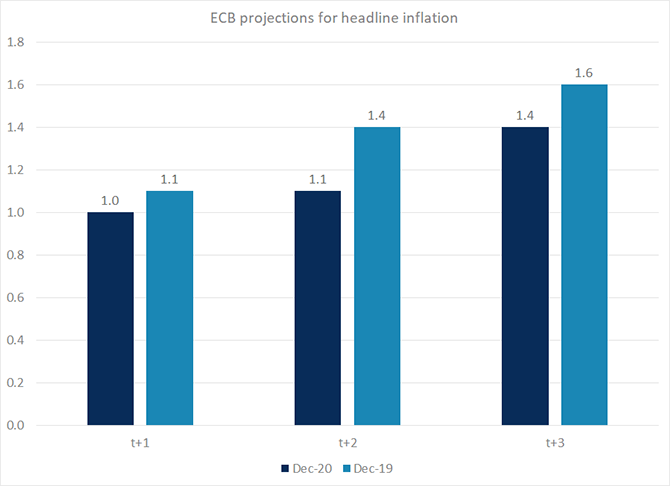 ...meaning policy setting has shifted to a more cautious stance

The continued undershooting of the inflation target may be a persistent problem for the ECB even when the end of the pandemic might justify a less exceptional policy stance. Hence, the focus today on temporary or time bounded instruments such as the PEPP and TLTRO’s with natural future end-points that should enable an eventual move away from ‘emergency’ policy settings.

A relatively positive assessment of the economic outlook likely underpinned by encouraging recent vaccine news undoubtedly influences the calculus in relation to the appropriate stance of monetary policy. In addition, the likelihood that many officials seen monetary policy as approaching the bounds of its capacity, coupled with the expectation of materially looser fiscal policy, argues for caution and a focus on continuity of stance rather than pushing the boundaries too far.

Such an approach means that while the ECB would act to counter any sharp increase in borrowing costs for Euro area Governments or the private sector, a gradual reflection in interest rate markets of the implications of an improving economic environment would probably not prompt aggressive offsetting action.

This suggests we are some distance from and likely moving further away from any mechanical attempt at yield curve control. The ECB remains very wary of the threat of becoming subject to lasting fiscal dominance even if it strongly repeated today its committed support to an ambitious and coordinated fiscal stance at present.

The exchange rate is less important …at present.

This nuanced approach also poses the ECB some challenges in terms of articulating its position on the exchange rate. ECB president Christine Lagarde today repeated that ‘We will also continue to monitor developments in the exchange rate with regard to their possible implications for the medium-term inflation outlook’. However, her cursory response to a question on the exchange rate marked another step away from earlier attempts at verbal intervention to limit any rise against the US Dollar

To a significant degree, this is because the recent trajectory is largely a product of broadly based Dollar weakness rather than Euro strength. In this context, today’s new projections envisage a modestly softer trade weighted Euro overall notwithstanding an increase against the US  currency.

How long can it last?

In summary, the initial market reaction to today’s ECB policy actions follows a longstanding pattern of disappointment at measures that do not deliver the ‘shock and awe’ that they desire. However, the modest scale of movement in interest rates and currencies in the wake of today's ECB actions reflects both how much stimulus is already in place (and is modestly augmented by today’s measures) as well as an increasing market focus on what form the post-pandemic world may take.

We would caution that before long the ECB objective of ‘preserving’ current conditions could be tested by market thinking on what a recovery might mean for the future stance of policy. What levels of fiscal and monetary stimulus might be justified by a solid if uneven recovery and subdued inflation will mean the ECB is likely to face continuing challenges through the coming year.