ECB starting to prepare its first steps towards tightening?

There was a small surprise from the ECB today but markets paid more attention to a very clear message from Mario Draghi that any material change in the ECB’S policy settings remains some significant distance away. As a result, a brief spike in the exchange rate of the Euro and in term interest rates that followed the ECB’s initial policy announcement was more than reversed as Mr Draghi delivered a dovish update of ECB thinking.

The initial surprise came because the ECB opted to remove a commitment to increase the scale or duration of the Asset Purchase Programme in the event of a deterioration in economic or financial conditions.  It was small because the improvement in Euro area performance effectively made this commitment redundant some time ago and the minutes of the January ECB policy meeting suggested some officials had mooted to remove it at that point.

It was still something of a surprise because it was felt that the recent step-up in protectionist rhetoric globally would lead the ECB to avoid any change in its signalling today that might unsettle somewhat jittery markets. However, risks in this regard were effectively eased by the broadly dovish messaging from today’s press conference.

In practice, the market absorbed (or ignored) the removal of this ‘easing bias’ because Mr Draghi’s comments and the ECB‘s new economic projections combined to send a very clear signal that conditions that might warrant tighter ECB policy are unlikely to materialise any time soon.

Mr Draghi again reiterated the need for ‘patience’ and ‘persistence’  to allow stronger economic activity and supportive monetary policy settings eventually translate into ‘..a sustained return of inflation rates towards levels that are below, but close to, 2% over the medium term. Mr Draghi did acknowledge growing ‘confidence’ that the ‘the strong and broad-based growth momentum in the euro area economy’ will deliver such an outcome but the ECB’s new projections suggest this will not be a speedy process.

Today’s new projections show only a marginal increase in the outlook for economic activity with 2018 GDP growth revised to 2.4% from 2.3%. Importantly, however, the outlook for 2019 and 2020 was not upgraded. So, the exceptional current momentum is seen easing progressively to healthy but not white hot rates of growth.

A somewhat cooler pace of expansion in coming years means that price pressures are projected to increase only slowly, thereby allowing the ECB considerable time to plot and implement a path to more ‘normal’ policy settings. The ECB’s new projections actually entail a slight downward revision to headline inflation for 2019 to 1.4% from 1.5% previously.

While this revision isn’t material and reflects a changed trajectory for energy costs rather than any more fundamental change of view (underlying inflation forecasts are unchanged from three months ago), the absence of any marked upward momentum-actual or projected- in Euro area inflation represents both a notable constraint on ECB policy as well as an indicator of current ECB thinking about the future path of policy as diagram 1 below illustrates. 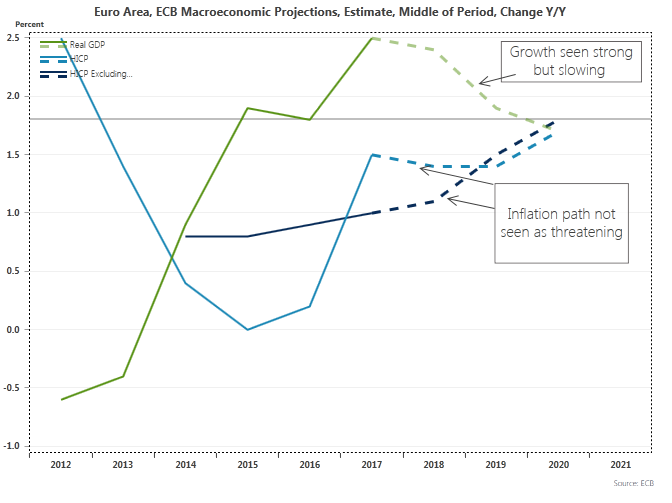 In effect, today’s new ECB projections represent something approaching a ‘goldilocks scenario’ in that growth is healthy but not too hot whereas inflation is still cool but not deflationary cold. In these circumstances, the ECB likely feels the balance of risks in terms of a policy error would lie in the direction of a premature tightening either as directly  as a result of ECB action (as happened in the historic past) or indirectly through market re-pricing that led to notably tighter financial conditions in the Euro area.  As a result, the ECB likely feels a strong need to signal its intention to remain on the side-lines for some time to come.

Mr Draghi was asked a number of times about possible disruptions to the Euro area economy from growing concerns about the threat of trade wars. The ECB president suggested the immediate impact might be ‘not too big’ but he acknowledged the uncertainty that might follow from risks of tit-for-tat-retaliatory measures, possible effects on exchange rates and broader impacts on confidence.

While an increasing trend towards protectionism is undoubtedly a source of risk to the outlook, we don’t think it was central to the dovish tone presented by Mr Draghi today.  Significantly, today’s new ECB projections see prospects for global trade growth marked up appreciably for each of the three years 2018-2020. A more modest upgrade to Euro area exports may partly reflect the constraining influence of a stronger exchange rate.

We think that the ECB will be very pleased with the market’s response to today’s pronouncements. The removal of the easing bias in relation to Asset purchases is a very small step but it is one in the direction of a normalisation of policy. Significantly, the ECB has negotiated this first step without the slightest hint of a ‘taper tantrum’.

There is little expectation of any further step being taken for some time-most likely not until June or possibly even later as there is little expectation of a sudden stop to the Asset Purchase programme in September.
We think the momentum of growth may continue to surprise on the upside in the near term and some modest uptick in inflation could become evident by summer. Such developments would likely prompt a possibly significant re-evaluation of the current glide path for ECB policy and may turn focus to exactly when and how much policy rates could rise in 2019.

However, in the aftermath of today’s ECB meeting, that seems a very distant prospect and the expectation of extended ECB inaction is likely to be seen as a calming influence constraining the sort of moves in the Euro exchange rate and term interest rates that markedly stronger economic conditions in the Euro area would otherwise deliver.