Is the Irish economy delivering wealth, well-being or worry?

Survey suggests purpose more widely felt than progress; people more positive that the things they do are worthwhile than how satisfied they are with their lives

In the week before Christmas, it may be worthwhile stepping away from consideration of the usual assortment of economic statistics to ask whether or how current Irish economic conditions are delivering the intended (if indirect) goal of significant and broadly-based positive experiences of life in Ireland.

It is commonly agreed that conventional metrics such as GDP are not closely correlated with consumer well-being. While sectoral accounts data show aggregate Irish household income at an historic high point in mid-2019, an ongoing increase in the number of households means average disposable income per household is still slightly below its 2008 peak. In contrast the Survey of Income and Living conditions suggests average household disposable income is slightly higher now than in 2008 and various measures of poverty have fallen close to pre-crisis low-points. In the same vein, Central Bank estimates show aggregate household wealth at record highs but demographic change means the average Irish household’s net worth is still somewhat below 2007 levels.

By its nature, well-being cannot be measured solely in money terms. The KBC Bank Ireland consumer sentiment index measures Irish consumers’ perception of their economic environment both in terms of their assessment of conditions in the Irish economy as a whole and their views of their personal financial circumstances. As the diagram below illustrates, the trend in consumer sentiment has been closely correlated with that in consumer spending through the past two decades.

The sentiment index provides a measure of changes, both current and expected, in the economic and financial conditions facing Irish consumers but it is focused on these particular elements rather than the broader concept of consumer well-being. 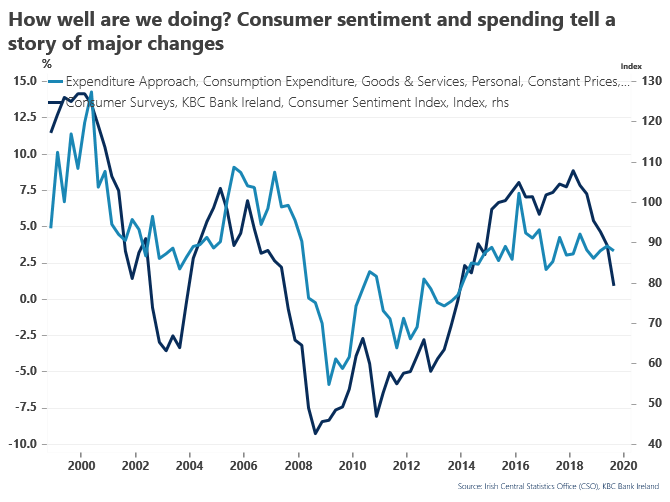 Measuring well-being from an economics perspective, however, is far from straightforward, but it shares some key characteristics with barometers such as consumer confidence measures. The subjective sense of well-being is somewhat different to metrics such as the United Nation’s Human Development Index, which combines data on life expectancy, years of education and income per person to arrive at one composite and objective measure of factors enhancing outcomes for a country’s population. The recent UN HDI report placed Ireland 3rd of 189 countries in its global ranking for 2019. Significant as the elements of the HDI metric are to economic development, they may not adequately or accurately capture the priorities a country’s population see as critical to its well-being.

Eurostat produce a number of measures of personal well-being that provide subjective measures of satisfaction with life, financial circumstances and relationships. However, we wanted to avoid being prescriptive in terms of suggesting a particular order of specified factors were critical to well-being.

In an effort to arrive at a somewhat broader perspective on Irish consumers’ sense of their well-being, we adopted a format used by the United Kingdom’s Office for National Statistics in their ‘Personal well-being in the UK’ survey. In November 2019 (as a supplementary section in the KBC Bank consumer sentiment survey), we asked Irish consumers four questions covering satisfaction with their life at present, the extent to which they feel the things they do are worthwhile and the degree of happiness and anxiety they felt during the past three months.

From responses to these four questions, we construct a composite measure of well-being that captures elements of progress, purpose, pleasure and pain. However, we think the distribution of responses across Irish consumers to each of the questions asked and demographic factors that may be influencing those variations are of more importance than the summary numerical measure we produce.

We would also emphasise that while any measure of well-being should capture perceptions that go well beyond the immediate economic environment, consumers’ assessments are unlikely to be  entirely divorced from current economic conditions. At present, Irish consumers are viewing potentially substantial threats to their financial future from a range of developments, most notably Brexit, in circumstances where significant financial and psychological scarring from the financial crisis persists. These considerations might suggest Irish consumers might not assess their current well-being as favourably as very positive macroeconomic statistics might imply.

Following the format of the UK Household Wellbeing Survey, the first well-being question Irish consumers were asked was ‘On a scale of 0 to 10, with 0 being the lowest and 10 being the highest, how satisfied are you with your life at present?’ Responses to this question gave a mean value of 6.1, modestly above the mid-point in an eleven point range. The diagram below shows the distribution of answers to this question. Some 31% of these were in the top three points on the scale (8, 9, 10) which we judge to be very positive while a notably smaller but significant 9% were in the lowest three rankings (0,1,2) which we would take to suggest a very negative assessment of consumers’ life satisfaction.  The main characteristics influencing responses were: