Irish consumer sentiment weakened notably in June as increased global uncertainty and pressures on household spending power combined to push sentiment to its poorest reading since May 2017.

While this clearly points towards weakening confidence, we don’t think it suggests the average Irish consumer has experienced any dramatic worsening in their economic circumstances of late. Instead, the poorer sentiment reading for June likely emphasises how fragile confidence and the financial circumstances of many Irish consumers remain even after several years of strong recovery in activity and employment in the Irish economy.

The KBC Bank/ESRI Irish consumer sentiment index fell to 102.1 in June from 106.7 in May, the second largest monthly decline in the past twenty months (The index fell a slightly larger 5.1 points in February 2018).

All of the five main elements of the sentiment index were weaker in June than in May. However, it should also be noted that the number of positive responses significantly outnumbered negative responses in each of the five elements in June. So, while sentiment weakened last month, the mood of Irish consumers remains broadly if guardedly positive.

Although domestic factors played some role, our sense is that the downgrade of Irish consumer sentiment in June was also driven by a more threatening global environment that was reflected in the performance of similar confidence indicators in other countries. 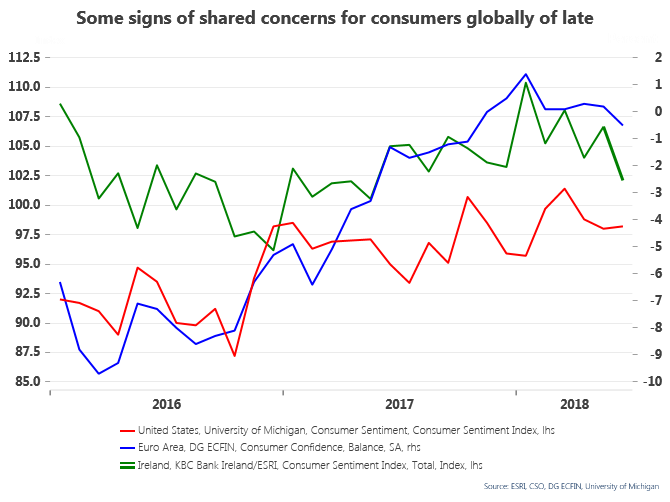 Although US consumer sentiment was broadly unchanged in June, the compilers of that report noted that roughly one in four US consumers mentioned the impact of trade tariffs on the economy and 80% of those expected an adverse impact. In the UK, ongoing domestic political uncertainty, a related lack of clarity on Brexit and signs of weakness in the housing market likely contributed to a poorer confidence reading in June.

Euro area consumer confidence fell to an eight month low in June with fifteen of the eighteen countries (excluding Ireland) reporting monthly declines. In addition to the threat of a global trade war, Euro area consumers are also dealing with the vexed topic of immigration and a range of issues related to the electoral platform of the new Italian government.

The sense of a notably more threatening external backdrop to Irish economic prospects prompted only modest slippage in consumers’ expectations for the Irish economy in the next twelve months. A complicating factor in terms of this area of the survey may have been a number of domestic commentaries during the survey period that focussed on perceived risks of ‘overheating’.  These ostensibly opposing risks may have led to a comparatively small decline in this area of the sentiment survey.

If they were only marginally less confident about prospects for the Irish economy last month, consumers were notably less optimistic about the outlook for jobs. This element of the survey posted its weakest reading in thirteen months in spite of a sequence of new job announcements during the survey period. From the standpoint of the average consumer, the major threat posed by any weakening in the global economic outlook is to Irish job prospects. So, it is not entirely surprising that this element of the survey weakened more than the general economic outlook.

We also feel the prospect of significant redundancies in a number of high profile Irish companies could be weighing on the jobs element of the sentiment survey as could a broader sense that strong headline employment and unemployment data have not translated into a corresponding pick-up in wage growth.

It is important to note the contrast between the cautious message of the June sentiment survey with the markedly more positive job market signal coming from official unemployment data which show a drop in the jobless rate drop to 5.1% last month, the lowest since October 2007.

As in other countries, a strong dynamic in job creation (and a corresponding drop in unemployment) in Ireland appears to have been accompanied by notably more muted wage growth and continuing concerns about job security. This apparent trade-off means the typical consumer’s assessment of job market conditions is likely to be notably more downbeat than that implied by official data.
This divergence and the painful memory of the scale of job losses seen during the downturn also means consumers are likely to mark down their assessment of the Irish jobs market significantly when faced with new threats to the broader economic outlook.

The June survey also saw increased caution on household finances, with monthly declines all three elements of the survey concerned with consumers’ spending power and plans. Again, it should be noted that in each instance positive responses continue to exceed negatives. So, Irish consumers continue to report some measure of progress in their personal financial circumstances but the sentiment survey emphasises how modest and uneven this has been.

Only one in four consumers takes the view that their household financial situation has improved in the past twelve months and a similar number expect gains in the coming twelve months.   In these circumstances, many consumers may be quite sensitive to developments such as the recent run-up in oil prices.   As diagram 2 illustrates, a softer trend in oil prices coincided with improving sentiment through the summer of 2017 while the firmer tone in energy costs through the winter coincided with more subdued sentiment readings. In a similar fashion, ongoing concerns about rapidly rising housing costs may have weighed on consumers assessments of their circumstances. 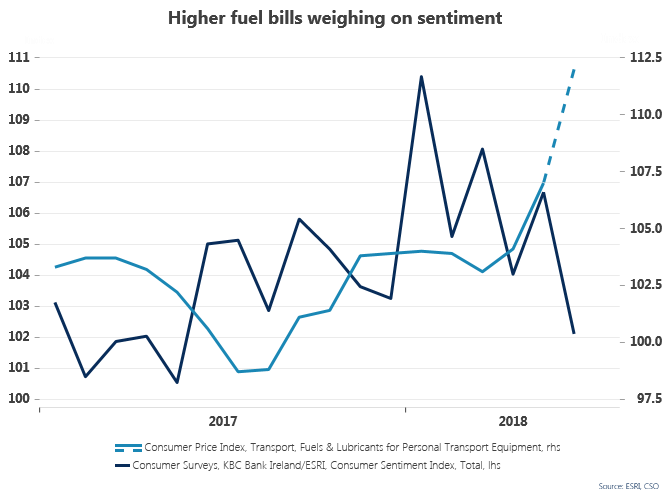 The sharpest pull-back in the June sentiment survey related to the buying climate, which posted its weakest reading in a year and a half. This is probably the most volatile element of the survey and we would expect some recovery in July as consumers hunt for bargains in the summer sales. Indeed, one factor in the poor June reading in this component of the survey is the likely deferral of purchases in anticipation of heavy price discounting to come as Irish consumers have become notably more price sensitive in their behaviour of late.

While we expect spending plans to recover in July, we think some element of the poor June reading reflects increasing caution on the part of Irish consumers. Potentially threatening global economic developments, limited income growth for the typical household and, for many, the financial and psychological scarring of the crisis are all significant arguments for restrained increases in consumer spending.

Similarly, the choppy nature of monthly changes, both in this element of the survey and in retail sales data, hints at an Irish consumer driven by discounts rather than ‘splashing the cash’. The sense that we are in an era of careful rather than conspicuous consumption likely reflects structural changes in the behaviour of Irish consumers as well as suggesting the economy as a whole is not in overheating territory.

As diagram 3 below illustrates, fluctuations in Irish consumer sentiment in recent years have tended to correlate with changes in the pace of retail sales growth. A brief pick-up in late 2017 has given way to subdued sentiment and a softer pace of increase in spending in the first half of 2018. This is also consistent with the weaker than expected VAT and excise receipts in the June exchequer returns released earlier this week.

The June sentiment reading is still consistent with a healthy increase in Irish consumer spending, particularly as the caution of the ‘typical’ consumer is tempered by strong increases in employment and population. We still expect the aggregate increase in consumer spending will be in the region of 3% in volume terms in 2018.

However, the general tone of the June survey suggests that, from the perspective of the average Irish consumer, the economic climate is still one of relatively cool conditions rather than soaring temperatures at present.  Again, this is broadly consistent with the mixed message emanating from mid-year tax returns where, excluding corporation taxes, receipts were up a modest 3.8%. 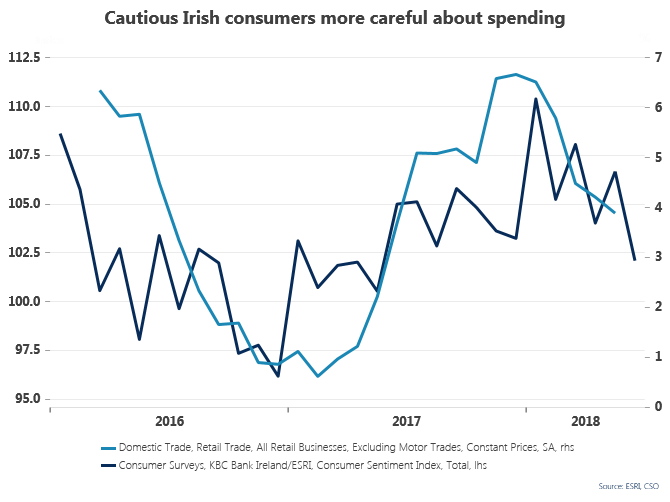 This non-exhaustive information is based on short-term forecasts for expected developments in the economy and financial markets. KBC Bank cannot guarantee that these forecasts will materialize and cannot be held liable in any way for direct or consequential loss arising from any use of this document or its content. The document is not intended as personalised investment advice and does not constitute a recommendation to buy, sell or hold investments described herein. Although information has been obtained from and is based upon sources KBC believes to be reliable, KBC does not guarantee the accuracy of this information, which may be incomplete or condensed. All opinions and estimates constitute a judgment as of the date of the report and are subject to change without notice.
asdf