Coupled with strong July indicators, these data  suggest only limited fall in Irish GDP likely in 2020

Irish GDP data for the second quarter show a sharp but notably smaller fall than was widely expected or seen elsewhere. The diagram below highlights the exceptional nature of the recent trend in Irish GDP compared to notably steeper declines elsewhere. This suggests that even our previous above consensus forecast of a 5% drop in GDP for 2020 as a whole now looks too pessimistic. 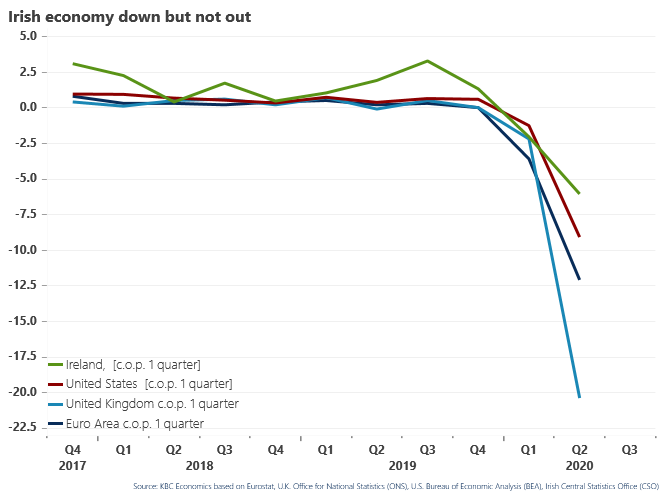 While there is still much uncertainty about the likely course of the coronavirus and the related path of the global economy,  we now think the full year outturn for GDP may only be modestly negative at about -1%. Indeed, the limited decline seen in the first half of the year coupled with the strong recent momentum in areas such as industrial production and retail sales data through July suggest there is a reasonable prospect that Irish GDP could be virtually unique globally in posting positive growth this year.

As we have repeatedly argued, the exceptional resilience of Irish GDP data thus far is first and foremost a reflection of the magnitude and make-up of the multinational sector in Ireland. As in the first quarter, manufacturing activity made a significant contribution to GDP as output increased 1.5%. To put this into perspective, UK manufacturing output shrank 20.2% in the second quarter.

Moreover, Irish manufacturing now accounts for almost 40% of GDP making it almost four times as important in terms of economic activity as its UK counterpart. More fundamentally, as we noted previously, the out-performance of Irish based manufacturing output reflects its sectoral composition which, focussed on Pharma, medical devices and ICT makes it far less susceptible to the pandemic-driven pullback in global economic activity.

If the headline GDP data don’t adequately capture the sort of downturn being felt by most Irish businesses and households, a strong sense of its severity is suggested by the scale of decline seen in modified domestic demand which tumbled 16.4% between the first and second quarters. This reflected dramatic declines in consumer spending of 19.6% and a 38% fall in construction output. Although GDP declined by a ‘record’ amount in the second quarter, the contraction was broadly similar to that seen on a number of occasions in the past. However, the scale of deterioration in modified domestic demand prompted by the pandemic is entirely unprecedented as the diagram below illustrates. 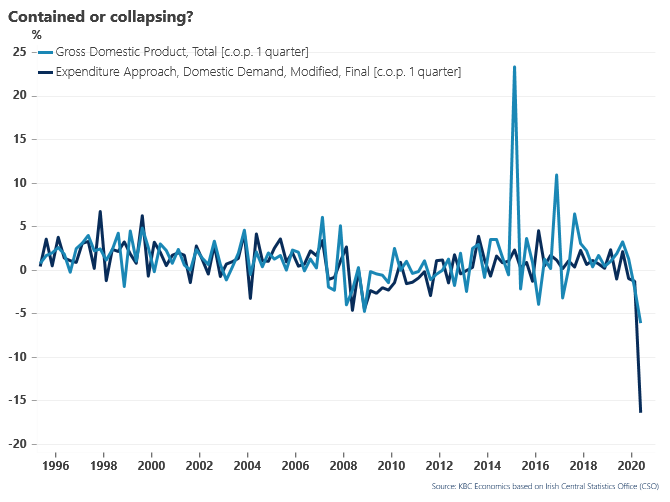 Again, some context is provided by a comparison with UK data which showed a 23% drop in consumer spending and  a 35% fall in construction. However, in the UK, these developments in tandem with declining manufacturing output resulted in a 20.4% fall in GDP whereas the specific strength of multinational manufacturing meant Irish GDP dropped by just 6.1%.  We think that final modified domestic demand is likely to shrink by about 8% in 2020 and this metric is likely to provide a more representative measure of the scale of decline in Irish economic conditions this year than an altogether smaller drop in GDP.

Although we continue to highlight the ‘technical’ nature of the current strength of Irish GDP data, it should be emphasised that this is more than a purely statistical artefact. The multinational sector is a substantial employer as well as a major contributor to tax revenues that enhance Ireland’s fiscal capacity to respond to the pandemic. Moreover, the broader resilience of tax revenues and the marked improvement in activity indicators (including the latest CBI daily card spending data) coupled with the significant drop in numbers receiving the Pandemic Unemployment Payment point towards a clear if still cautious rebound in the Irish economy from the severe deterioration indicated by the drop in domestic demand in the second quarter.