…but upcoming policy review will be lengthy and far-reaching

Financial markets do not expect any significant policy adjustment from the European Central Bank any time soon and, correctly, felt no significant changes would be signalled today. As a result, there was little immediate movement in term interest rates or the exchange rate of the Euro  in response to new ECB president, Christine Lagarde’s first press conference.

While Ms Lagarde’s tenure as President of the ECB is expected to be different, possibly to a significant degree, from that of her predecessor Mario Draghi in several important respects, today’s message from Frankfurt is that the ECB intends and expects to stay on the policy sidelines for some considerable time.

The ECB signalled slightly reduced risks to the economic outlook, lessening the likelihood that a further easing might be required while the persistence of subdued growth and inflation in its new projections would suggest policy tightening wouldn't be warranted for the foreseeable future. In addition, the indication that a Strategic review of ECB policy is expected to take until the end of next year provided an additional rationale for the ECB to avoid any early alteration in current policy settings.

New era may be less dramatic

In stark contrast to Ms Lagarde, Mario Draghi marked his first month as ECB president by easing policy in November 2011, initiating a marked change in the nature and scale of ECB actions. Mr Draghi’s term effectively ended with a notably more contentious form of easing three months ago. Some sense of the magnitude of the ECB regime shift under Mr Draghi is illustrated in the diagram below that shows the extent to which policy rates fell and the ECB’s balance sheet increased. The question  is how and when these metrics might change in coming years. Current sentiment in financial markets suggests any changes during Ms Lagarde’s tenure will be little and late. 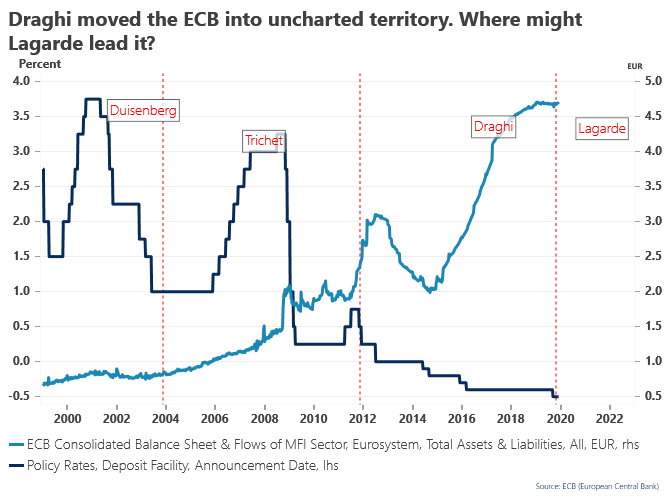 The recent ECB easing in September means that no further policy changes are envisaged in the early months of Christine Lagarde’s term in office but the actions the ECB has taken and the inflation and activity outcomes that have resulted raise questions as to whether current policy settings and the ECB’s broader strategy are sustainable into the medium term. As a result, Ms Lagarde’s first post policy meeting press conference commanded some attention today for any hints as to how and when policy might alter in the future.

The first challenge for Ms Lagarde was to reconcile current ECB policy settings with new ECB projections encompassing initial estimates for 2022 that suggest economic growth will remain sluggish and inflation subdued. Significantly, while moving in the right direction and expected to reach 1.7% at the end of 2022, Ms Lagarde noted today, that this expected trend is ‘directionally good but is it the aim we pursue? No.’

While today’s new projections suggest the economic climate is expected to offer little reason to tighten policy anytime soon, the likelihood of a further ECB easing is also seen to have lessened. The opening press statement today indicated that ‘there are some initial signs of stabilisation in the growth slowdown and of a mild increase in underlying inflation in line with previous expectations.’ The ECB also note that risks to activity ‘remain tilted to the downside, but have become somewhat less pronounced.’

Current stance will continue in spite of some concerns

Ms Lagarde was relatedly asked about the nature and balance of recent ECB policy actions. She forcefully indicated no early rethink by stating ’I’m not going to revisit the past. Policy decisions that were made stand and were re-endorsed yet again’. Pointedly, she simply said ‘no’ when asked whether the ECB had discussed the potentially problematic issue of borrower limits and their effects on the ECB’s asset Purchase Programme .

Pressed on the potential adverse side effects of negative rates, Ms Lagarde emphasised that the ECB was aware of such issues, that tiering was intended to address such impacts and suggested the ECB would develop work further in relation to assessing risks in this regard.

When asked about the threat that the Euro area might face a ‘reversal rate’ where the unintended effect of accommodative policy is to have a contractionary impact on lending, Ms Lagarde highlighted the current positive rates of lending growth.  However, the concept of the reversal rate envisages that the initially positive impact is eventually overwhelmed by increasingly adverse impacts on the banking sector. So, it might be suggested that the jury is still out on this subject.

Strategy review will take some time but has it already started?

An important element of today’s press conference was some preliminary indications in relation to a recently promised Strategic Review of ECB policy. Ms Lagarde suggested the review would not consider changes to the ECB’s mandate of price stability but would undertake a comprehensive examination of the medium term objective that the ECB uses to operationalise that mandate.

While she noted that ‘there is no preconceived landing zone at this time’, the ECB has already moved subtly towards what is expected to be a more explicit and likely slightly higher operational definition of price stability around 2%.

In its September press statement, the ECB subtly and quietly amended its stated medium term objective from the wording ‘below, but close to, 2%’ agreed in the 2003 strategy review and used ever since to the wording ‘close to, but below 2%’. This revised ordering places greater emphasis on the symmetry of the inflation target and suggests a reduced tolerance for outcomes materially below 2%. This shift might be made more explicit when the ECB concludes its strategy review next year.

Ms Lagarde suggested the goal would be to complete the Strategic Review by the end of 2020 and it would  ‘reach out’ and listen to parliamentarians, to academics and representatives of civil society. It will also consider the policy implications of technological change and climate change as well as examining inequality ‘to better respond to  the mission that we have and deliver on our mandate...’ However, Ms Lagarde indicated that she couldn’t go into further details because the framework has yet to be agreed within the Governing council.

The wide ranging nature and significant timeframe indicated for the ECB‘s review may be seen as a significant additional constraint- beyond the immediate economic environment- on major policy initiatives from the ECB through 2020. Whether markets respond to what could be some very radical proposals from various quarters for the ECB’s future target and toolkit remains to be seen but the likelihood is that very divergent views on what the ECB could and should do may well become a feature of the coming year.