The strength of the Irish jobs market continues to be a critically important counterweight to what has become a very difficult economic climate in recent months. Higher employment is generating additional incomes and spending power that will at least partly offset cost of living pressures and the threat of materially slower global growth.

Numbers at work in the Irish economy continued to increase strongly  in the first quarter of 2022, rising by 1.4% on the previous quarter, which translates to an additional 35.7k people at work in the past three months. As a result, employment is at record levels and continuing to rise rapidly.

Some sense of the exceptionally positive trajectory in Irish employment since the pandemic struck  suggested by the diagram below. Indeed, if Irish jobs creation had followed the pace seen in the US, there would now be 118k fewer in employment here in Q1 2022, if it had matched the Euro area average, there would be 140k fewer employed, and if the experience here was the same as the UK economy numbers at work in Ireland would be 195k lower in Q1 2022.

The pace of increase in employment in Ireland remains uneven but  the improvement is broadly based.As panel 1 of the diagram below indicates, numbers at work in Q1 2022 were higher than their Q1 2020 level in nine out of fourteen sectors. These divergences reflect short-term cyclical influences but also longer-term structural changes.

There is a clear split in terms of the speed of jobs growth. Rapid jobs gains in areas such as technology and industry largely reflect the robust and resilient nature of the multinational sector while areas such as health where demand has increased markedly of late, have seen jobs growth driven to a significant extent by shortcomings exposed by the pandemic.

At the other end of the spectrum, changed work practices have curbed demand for admin-type jobs while increased online activity has also weighed on employment prospects in retail and wholesale sectors.

This ‘lagged boom’ in hiring in tourism-related activities may help explain current hiring difficulties in this area where ‘scarring’ from the pandemic likely led employees previously working in this sector to switch to faster-recovering areas that may have offered seemingly more secure job prospects.

To a lesser extent, similar issues regarding the balance between the demands of employers and the supply preferences of employees may be at play in the construction sector. These movements may go some way to explaining some unusual characteristics of the Irish jobs market. However, it also seems that these developments are markedly different to those in the US where a current shortfall in workers in some areas is being attributed to the ‘great resignation’ or the ‘great retirement’.

Instead, it might be suggested that what we are seeing in terms of some sectoral mismatches is an almost inevitable consequence of a particularly dynamic jobs Irish  market.

Substantial structural changes wrought by the pandemic generated switching opportunities for a cohort of  well-educated and flexible workers, both domestically and internationally (the number of Irish citizens in employment in Q1 2022 was 10.6% higher than a year ago whereas the number of non-Irish citizens was up 21%).  It is not entirely surprising that alongside  a buoyant jobs market as a whole, this dynamic ‘churn’ has led to significant shortfalls of employees in some sectors.

Importantly, the flexibility of the Irish labour market is also seen in a notable increase in the labour force of late.While vacancies are at problematic levels in some areas, Ireland’s overall vacancy rate at end 2021 at 1.4% was clearly below the Euro area average of 2.8%. A strong Irish economy is translating into a marked increase in labour force participation, which stood at a thirteen year high of 65.2% in Q1 2022, up from 60.3% a year ago and from 62.6% in Q1 2020.

As the diagram below illustrates, this is a reflection of an Irish economy that is altogether more flexible than most others. As the diagram shows, the downturn after the financial crisis was marked by a weaker trend in labour force participation but the post-pandemic rebound suggests that robust labour demand is encouraging a notable increase in labour supply.

Encouragingly, the increase in labour supply is coming from a somewhat faster increase in female labour force participation than in male participation.  This could be associated with increased scope for working from home but is likely to require supportive policy measures particularly in areas such as childcare if it is to be sustained. 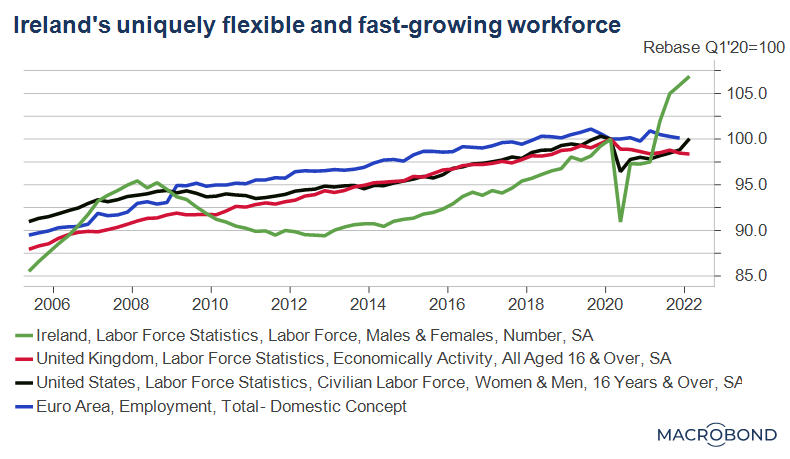 The continued strong trend in job creation has resulted in renewed downward pressure on unemployment.The seasonally adjusted jobless rate was  5.0% in Q1 2022,down from 7.4% a year ago. However, it is still fractionally higher than the 4.9% seen in Q1 2020. So, alongside the surge in labour supply, this hints at continued room to grow.

In light of the increasingly difficult global backdrop the Irish economy is now facing, sustaining positive momentum in employment through the year ahead would seem a challenging but not unrealistic prospect.

Looking into 2023 and beyond, a key focus for the upcoming Budget '23 must be to calibrate fiscal policy to help support a high speed Irish economythat can deliver strong and broadly based job opportunities in coming years-as well as sustaining robust growth in tax revenues. That implies measures that further incentivise participation in the work-force.

Beyond, offsetting the 'fiscal drag' impact of inflation on wages, further infrastructure initiatives on accommodation, transport and childcare are urgently needed if growth in employment is not to move to a materially weaker trend.