This is the second in a short series of pieces looking at particular issues relevant to Budget 2017.

Two weeks ago, the Minister for Finance, Michael Noonan, downplayed any possibility that next week’s Budget might contain any significant reduction in income taxes, noting that taxpayers won’t be ‘throwing their hats in the air on Budget night’. In fact, there is a greater risk that many taxpayers will be pulling their hair out when they consider how sharply the burden of income taxes has risen in recent years and are faced with the prospect of little or no easing in their tax burden in 2017. 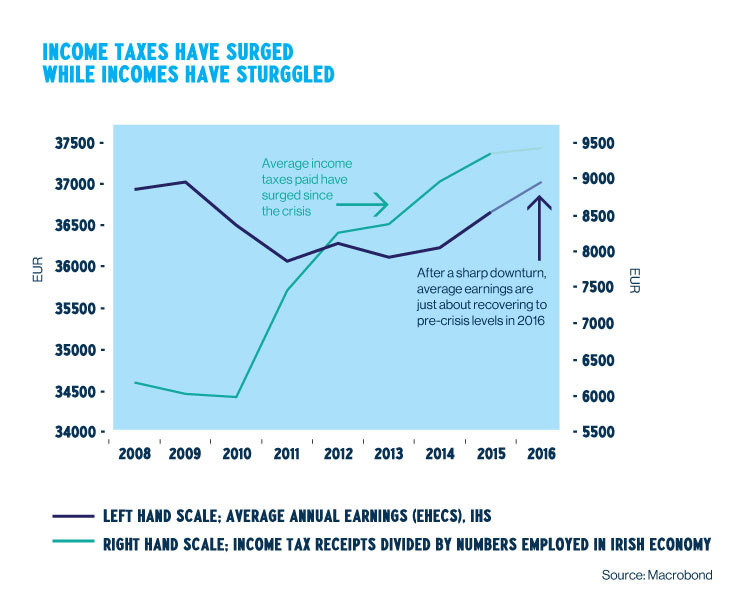 Of course not all workers earn sufficient incomes to pay any tax—36% of earners are exempt from income taxes and 29% are exempt from the USC while some non-workers such as those with significant pensions or savings pay income taxes on their earnings from these sources. However, these figures give a broad sense of the enormity of the increase in income taxes at the individual level in recent years.

This sharp increase in the income tax burden over the past eight years may go some way to explaining why so many workers still feel they are not seeing any worthwhile improvement in their lot. As such, this graph may indicate why components of the consumer sentiment survey suggest a significant number of consumers have a strong sense of being left behind by the economic upturn.

The tax trends evident in this graph and a worsening industrial relations climate, as evident in a host of public sector pay disputes of late, might suggest it would be prudent to cut income tax meaningfully in next week’s Budget and take some of the steam out of potentially troublesome pay talks across the economy. However, most informed speculation suggests the Budget is likely to disappoint in this regard.

It has been widely indicated that some €300million will be available in Budget 2017 for income tax measures. However, this is a fairly limited amount which averages out at about €3 per worker per week. This means some Irish workers will face a somewhat higher tax burden in 2017.

As workers get pay increases, the share of their income that falls into higher tax brackets increases quickly. Critically, compared to many other countries, such step-ups in tax happen at relatively low income levels in Ireland-- with the top tax rate currently kicking in at €33,800 for a single taxpayer-- about €4,000 below the average wage.

For many workers, even modest pay increases next year will push up their ‘effective‘ tax rate (the amount of tax they pay relative to their income). The figure of €300 million pencilled in for income tax measures in the upcoming Budget is about the minimum needed to offset this tendency and maintain the current average tax burden across the economy as a whole. It is probably a fraction of the amount needed to create any clear sense of a reduction in the income tax burden.  For this reason, it seems likely that talk of tax cuts in Budget 2017 will ring hollow for many workers.