Budget 2016: No Pain and Some Modest Gains

Progress in improving public finances to continue; deficit and debt below Euro average in 2016.

Political motivations clear but some solid economic grounds for a ‘feel-good’ Budget.

With a general election looming, it is understandable that there are concerns that a pressing political timetable would completely override economic considerations in the framing of Budget 2016. Reflecting this there has been a significant amount of commentary focussed on the merits or otherwise of adding to spending power in an Irish economy that is now growing rapidly. It is inevitable that political considerations figured prominently in the shape and scale of measures announced in Budget 2016. However, we don’t think this influence necessarily conflicted with the balance of economic arguments.

First of all, it is important to emphasise that progress in addressing problems in Ireland’s public finances has surpassed even the most optimistic of expectations. As diagram 1 shows, Government borrowing excluding costs arising from support to the financial sector fell from a peak of just under 12% of GDP in 2009 to 8% of GDP by 2012 and progressively each year to 6%, 4% and 2% of GDP in 2015. We think next year’s out-turn could be slightly lower than official projections at 1% or less. 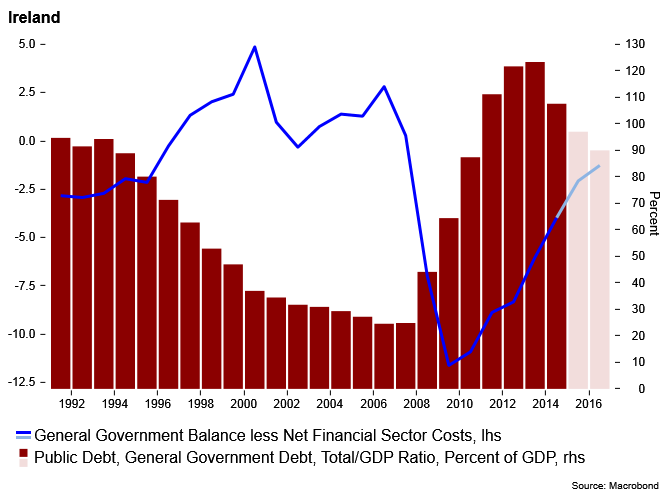 In turn, public debt has fallen from a peak of 123% of GDP in 2013 to an estimated 97% of GDP by the end of this year. We think the strong trajectory of the public finances and the Irish economy together with the sale of part of the Government’s holding in AIB could bring the debt to GDP ratio to 90% next year. Next year, Ireland’s deficit and debt ratios should slip below the Euro area average which the IMF currently estimates at 1.7% of GDP and 92.8% of GDP respectively. This means that, after the efforts of recent years, the fiscal position while still important need no longer be the sole focus of domestic policy-making.

In any event, EU fiscal rules should ensure that there is no significant threat of a reversal of recent progress. Government borrowing of around 2% of GDP in 2015 will comfortably beat the target of a deficit below 3%.  As a result, Ireland now moves from the corrective phase of EU fiscal rules to the preventive phase in 2016. Progressive improvements in the underlying or structural deficit of at least 0.6% of GDP will be required each year. Plans for 2016 envisage a cut of 0.8% of GDP resulting in a headline borrowing target of 1.2% of GDP next year. This looks achievable given healthy domestic economic conditions.

The preventive phase also requires public spending to increase less than the economy’s potential growth rate. As this only takes effect next year, there was a strong incentive to boost spending in late 2015 as this will increase the base from which future increases will be calculated. Importantly, this is a once-off and the new rules may prove a significant constraint on Irish public spending in future years.

After a prolonged and painful fiscal adjustment totalling some 17% of GDP (see diagram 2 below), there are strong arguments on grounds of economic and social cohesion that Budget 2016 needed to signal that those efforts have been successful and that scope had been created for some easing in the associated burden. Such measures are particularly important if business and consumer confidence is to be underpinned.

Diagram 2: Plenty of Slack To Justify A Small Stimulus 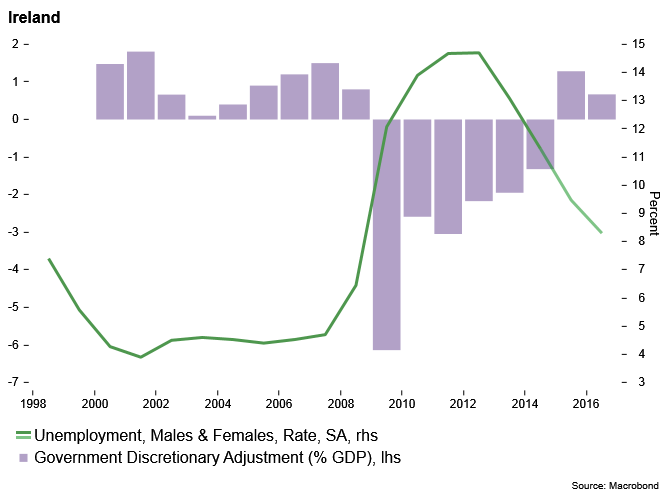 Although we expect the Irish economy to grow by 6.5% in 2015, we still think some support for activity can be rationalised on economic grounds. GDP is now about 5% above its pre-crisis peak but household income is still 9% below its previous peak. The upswing has strengthened of late but its extent varies widely across parts of the country and economic sectors.

Unemployment at 9.4% is more than twice its pre-crisis level and probably understates the true extent of ‘slack’ in the economy given a notably reduced participation rate and increased emigration. A broadly based disinflationary impulse seemingly embedded in the global economy further suggests the risks of generalised overheating seem fairly limited. With significant underutilised capacity in the Irish economy, consumer prices are likely to remain subdued –probably rising by about 1% next year. However, rapid inflation may persist in areas such as rents, insurance and education.

We think the Irish economy will grow by about 6.5% in 2015, which would represent the fastest pace since the year 2000. While recovery is real, the measured increase in GDP in 2015 likely exaggerates the scale of improvement being experienced by the bulk of businesses and households. The upswing is felt to widely varying degrees across different sectors and parts of the country. Budget measures should broaden the reach of the recovery.

GDP growth may ease to about 4.5% in 2016, not too far above the Department of Finance’s estimate of potential growth for next year (+4.1%). We reckon fiscal measures will impart a boost of about 1% of GDP to the Irish economy in 2016. While a fragile world economy may restrain exports, numbers at work and household spending should post solid increases and help push unemployment down to 8%.

As diagram 3 indicates, KBC Bank Ireland economic forecasts are very similar to those of the Department of Finance. While we are slightly more cautious on exports, we think spending on capital equipment could remain particularly strong. Our forecasts also assume the Budget plans translate into a faster increase in Public consumption than the Department suggests. On our reckoning additional public spending will impart a substantial direct and indirect boost to the Irish economy in the final stages of this year with a significant carryover effect through 2016. Perhaps significantly, the Department’s marginally lower GDP growth forecast for 2015 means it remains marginally below those seen in 2005 and 2006 while our slightly higher estimate would represent the fastest since 2000. 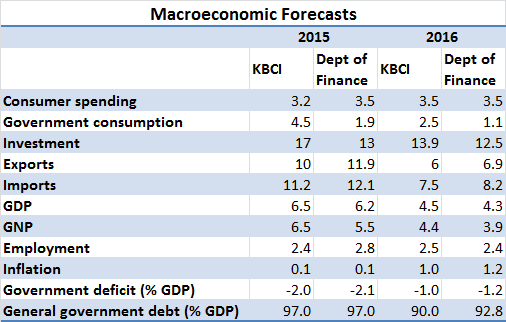 With the deficit and debt falling rapidly, Budget 2016 had scope to strike a balance between sustaining improvements in the public finances, supporting recovery and tackling a range of ‘bottlenecks’. Significantly, there were no major initiatives to boost private housing supply or tackle rapidly rising rents. It may be that lessons have been learned from the damaging, if unintended, consequences of a sequence of interventions to ‘fix’ the housing market through fiscal policy. However, a cursory examination suggests the new childcare measures may have more of an impact on demand than on supply and could thereby risk boosting prices in that area.

Importantly, headline tax revenues are roughly back to pre-crisis levels although the current figure is significantly swollen by the introduction of the Universal Social Charge in the interim.  With stability of tax receipts now regarded as a key policy priority and a decision now taken to delay any alterations in property taxes until 2019, this will focus attention on the central importance of income taxes. Interestingly, in this regard, ‘buoyancy’ effects from today’s measures mean that the post-budget forecast for income taxes in 2016 is little changed from the pre-budget number (€18,995mn v €19,159mn) despite income tax concessions with a full year cost of over €900mn.

With Budget 2016 removing 42.5k workers from USC liability to bring this total to over 700k, this raises important questions in terms of the future taxation of those deemed to be high earners on over €70k. Budget data suggest the proportion of earners with a higher rate liability will rise from 18% to 20% in 2016. This could become a vexed topic in coming years.