Are living costs now rising rapidly for many Irish consumers?

While Irish inflation has remained very low in the last several years—from 2013 onwards, consumer prices grew by just 0.3% annually—rapid price increases in certain areas have meant that many consumers’ pocketbooks might be more squeezed than the official figure suggests. Over the same period, private rents have increased by 7% annually, and health insurance has increased by about 4.5% each year. For many households, spending on items like these is absorbing an ever-increasing share of their incomes. In the KBC Bank consumer sentiment survey, a common finding has been that households are reporting that their own personal financial situation has not improved to the same extent that the main Irish macroeconomic indicators might suggest.

Official inflation data show that Irish consumer prices fell by 1.1% in August compared to a year ago, and by 0.5% on average since March. However, this decline does not appear to be mirrored in current consumer thinking. As part of the KBC consumer sentiment survey for August, we asked consumers to estimate how much their personal overall cost of living has changed in the past 12 months. The key findings were: 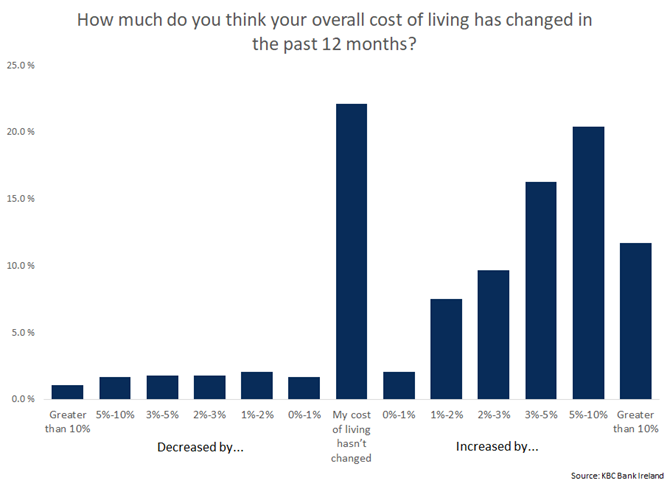 …with consumers in Leinster feeling it more acutely

While consumers in Dublin, Munster, Connacht and Ulster reported broadly similar average increases in their cost of living (ranging from 3.1% to 3.2%), the average increase in the perceived cost of living for consumers in Leinster excluding Dublin was 3.7%. This divergence from other regions in Ireland may reflect relatively rapid house price growth in Leinster, which since 2013 has on average been faster than seen nationwide. This is consistent with the findings in a recent Central Bank of Ireland Economic Letter which finds that house prices play a role in determining consumers’ inflation perceptions. 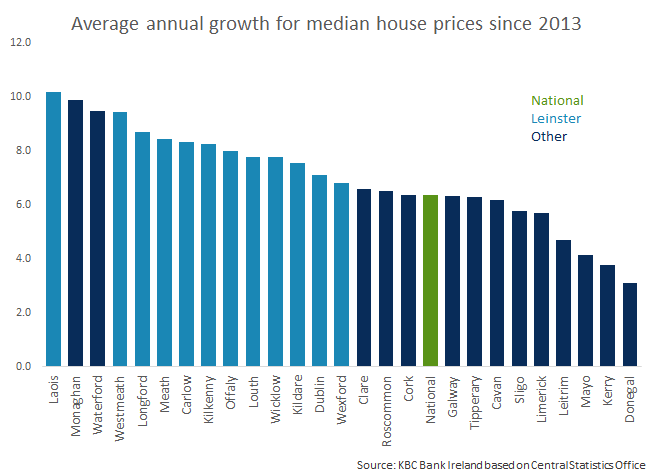 Considering the data by age, we find that the average increase in cost of living was highest for those between the ages of 45 and 54 years (3.9%), while the lowest was for those aged between 18 and 24 years (2.2%). There may be a few factors at play here. For consumers in general but for the 45 to 54 age bracket in particular, the higher perceived cost of living is likely driven by an increase in outlays. Over recent months, this may be due to increases in pandemic-related costs, such as increases in electricity and other utility bills if they have been working from home, additional streaming service subscriptions to keep multiple family members happy, or an increase in ordering in for meals.

Additionally, the higher reported cost of living for those aged between 45 to 54 years may not be a pure price inflation effect. Instead, it likely also reflects significant increases in costs of education and healthcare as children age and parents grow older. Conversely, the lower perceived cost of living for those aged between 18 and 24 may be driven to some extent by parents and/or other family managing some regular outlays, such as university fees, mobile phone payments, and insurance premiums.

As suggested earlier, beyond the “price effect” which influences Irish consumers’ cost of living, there may also be an increase in additional outlays i.e. a “volume effect”. The effect of the coronavirus pandemic has led to a temporary boost in volume in certain spending categories, such as food, sanitisers and other medical products. This may decline over time as the coronavirus pandemic eases, but as the aforementioned CBI analysis suggests and as our survey data highlights, the divergence between official inflation data and consumers’ inflation perceptions likely stems from a difference in weights applied to items in the average consumers’ “basket of goods and services”.

If the weights individual consumers attach to some goods and services differ significantly from the weights in the official inflation measure, they may experience changes in their cost of living that significantly diverge from the “average”. This is generally the case as the official measure is an average that does not consider stage of life or other demographic aspects, and it is particularly the case now as statistical offices are not able to quickly adjust for shocks, such as Covid-19, which may drastically change the composition of the consumers’ “basket of goods and services”.