Irish house price inflation eased further to 2.0% in June from 2.6% in July. The annual increase in June is the slowest rise in six years (since the 1.0% increase of June 2013). While there has been a marked slowdown in the annual rate of increase in Irish property prices, it should be noted that prices have returned to modest monthly gains in recent months, albeit much smaller than those seen a year ago.

The current softness in property price inflation continues to be most pronounced in Dublin where prices are broadly flat from a year ago. Outside the capital, the annual increase of 3.9% also marks a sharp slowdown from the 15.2% increase recorded in June 2018. However, the picture is not uniform, with some acceleration in the year-on-year in a number of areas ranging from Cork and Limerick to parts of the Dublin ‘commuter belt’ such as Louth and Meath. While ‘macro’ conditions tend to dominate, differences in ‘local’ factors such as affordability and area-specific demand/supply balances can also be important.

The broad trajectory of Irish property price inflation has been steadily weakening since the three-year peak increase of 13.3% seen in April 2018. It reflects a combination of supply and demand factors.

A steady and sustained increase in supply has undoubtedly contributed to slower Irish property price inflation of late both by increasing accessibility directly and lessening ‘panic buying’. However, if supply factors were the dominant factor behind the current slowdown in property price inflation, it might be expected that there would also be a marked increase in property transactions.

As the diagram below illustrates, the easing in property price inflation (green line) has not been accompanied by any acceleration in overall house purchases (light blue line) and there has even been some pullback in purchases of new homesof late (dark blue line) where the supply effect might be expected to be greatest.

Traditionally, changes Irish property market conditions have been initially driven by demand-side developments. The improvement in Irish house prices since their 2013 low-point has broadly mirrored the strong turnaround in the broader economy over the same period. As diagram 2 below illustrates, the pace of increase in Irish property prices has followed a similar pattern to the trend in the KBC consumer sentiment index through the recovery period. In both series, there are signs of a clear easing in 2018 that has persisted through the first half of 2019. 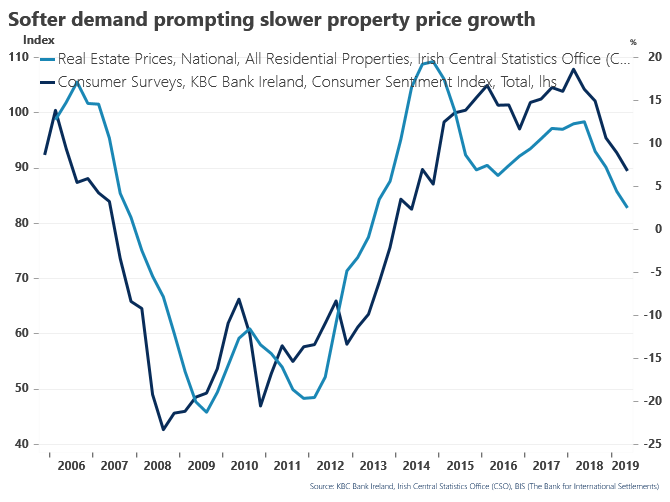 We think there are two distinct elements weighing on demand that are common to the recent easing in both consumer sentiment and property price inflation. The first of these is affordability issues. The details of the sentiment survey point to modest and seemingly disappointing growth in household incomes (the stronger aggregate income number is flattered by a rising population). Since the beginning of 2013, official data show average weekly earnings are up a cumulative 11%. Since the first quarter of 2013, Irish property prices have increased by 83%. With borrower behaviour constrained by lessons from the previous downturn as well as lending limits, the scope for property price inflation to outrun income growth looks to be exhausted. However, recent earnings indicators suggest some modest uptick in the pace of income growth of late.

A second consideration which may have increased in importance of late is increased uncertainty which has weighed on consumer sentiment and likely reduced the willingness to enter into major and long-lasting financial commitments such as house purchase. Unless concerns about Brexit and other significant downside risks to Irish economic prospects fade, this may act to dampen property price inflation further in coming months.