A small step for the deposit rate, a giant leap (in the dark) for the ECB?

Zero clearly not the low-point for ECB policy rates but could we be approaching the point at which costs outweigh benefits of further easing action?

Could further ECB rate cuts cause the White House to be tougher on EU trade relations?

Might a longer and more generous TLTRO make more sense?

As Mario Draghi contemplates his final actions as ECB president and Christine Lagarde prepares to step into the breach, the boundaries on what Central Banks can or should do have become far less clear-cut. Unfortunately, this means that there is also far less certainty as to whether unconventional policy actions are likely to help or hinder a return to more normal economic conditions.

It is widely expected that the ECB will implement a further range of measures with the intention of easing monetary policy at its next governing council meeting on September 12th. While specific measures have not been indicated, it is generally envisaged that the ECB will indicate that policy rates could remain at current levels or lower well beyond the currently indicated date of mid-2020.

Financial markets currently see no material increase in ECB policy rates until 2023 and don’t anticipate ECB rates will go meaningfully above zero for the foreseeable future. A further cut in the ECB’s deposit rate, currently at -40 basis points, has been widely mooted for next week. Such a move that would take ECB rates further into territory that seemed unimaginable until recently, a move that incoming ECB President Christine Lagarde recognised in testimony to the European parliament implies some negative effects. So do the costs of a move to even more negative rates by the ECB now threaten to outweigh any benefits?

Not so long ago, it was accepted wisdom that the monetary policy of Central Banks would become impotent when policy rates touched zero. The idea of this Zero Lower Bound (ZLB) stemmed from the view that deposit rates could not readily fall below zero and this ‘stickiness’ would disrupt the normal transmission of monetary policy.

In recent years, however, a range of Central Banks have moved some of their policy rates below zero in response to exceptionally challenging economic and financial conditions. In the case of the Swiss National Bank and the Danish National Bank, such actions were predominantly exchange rate related and reflected an attempt to stem capital inflows that threatened problematic currency appreciation.

As a result, the idea of the Zero Lower bound for interest rates has all but disappeared but most economists still hold to the view that there is an effective Lower Bound or Reversal rate at which any benefit from cutting rates further is likely to be outweighed by harmful effects of such a move. Unfortunately, economic theory doesn’t tell us exactly where that boundary point might lie and, in any event, it is unlikely to be constant.

However, there is a broad agreement that costs of negative rates are more likely to exceed benefits the lower the negative rate is and the longer it persists. This is because the benefits tend to be front loaded in terms of their impact on asset values while the costs in terms of a hit to commercial banks’ net interest margin and the related weakening of the transmission mechanism for Central Bank monetary policy tend to accumulate over time. More generally, there is also the question as to whether, the signal sent by such a move could cause businesses and households to save more either because of greater uncertainty about the near term or because of the prospect of poorer incomes in the longer term (because of the lower return on savings for example).

A key problem in determining when precisely the costs of negative rates might outweigh benefits is that the impact of interest rate cuts on the economy occurs through a number of distinct channels.  As economic theory provides little guidance on what point precisely rate cuts might hurt rather than help, there have been a large number of empirical studies in recent years that have focussed on these different aspects in an effort to assess whether the point at which costs exceed benefits may have been reached. Results of these studies vary significantly and, critically, tend to emphasise how condition specific the success or otherwise of unconventional policy measures such as negative rates may be.

Unfortunately, even disregarding conflicting evidence, a reliance on limited and incomplete historic experience may lead Central Banks to rely on a rear view mirror to steer policy.  This suggests we may not know whether we have passed the reversal rate until too late. In the paragraphs below, we look at the various channels through which negative rates might affect the economy and draw on the findings of a range of studies to assess whether further reductions in ECB policy rates might be helpful or harmful.

A large number of studies focus on what is often regarded as the main conduit for Central Bank policy, the bank lending channel which focusses on the relationship between Central Bank policy actions and credit creation. A recent paper (1) suggests that diminishing returns may have set in regard to negative rate policy in Sweden as the two most recent policy rate cuts do not appear to have been reflected in mortgage lending rates.

Similarly, the latest in a large number of ECB studies on this topic (2) can ‘find no evidence that interest rate cuts below the ZLB translate into cheaper loans. The study’s  findings also would suggest that there are no real effects associated with the lending channel’ However, the study also argues that for cash rich firms ‘Negative interest rates on deposits increase the cost of holding liquid assets and tilt the decision in favour of investing’. They term this the ‘corporate channel’  as it reflects the use by corporates of their own deposits rather than lending to fund investment.

The authors of this study (Altavilla et al) argue that commercial banks can charge negative rates on a significant portion of their balance sheet. However, their results suggest a more limited pass-through as they note  ‘On average, interest rates became negative for around 5% of total deposits and around 20% of corporate deposits in the euro area as a whole.’  While recognising that the research evidence is mixed, there are grounds for believing that in current circumstances of elevated economic uncertainty, further cuts in ECB rates would have limited effects at best on credit creation in the Euro area.

The key question is whether a specific easing measure is likely to encourage market confidence that a Central Bank will reach it’s stated policy goal or, alternatively and unintentionally, signals a measure of desperation and emphasises how remote that the policy goal now is.

In this context, a recent San Francisco Federal reserve research paper (3) argues that ‘when the BOJ announced its plan to move to negative policy rates, inflation expectations actually declined and then continued to trend downward afterward’. So,  it is not always the case that policy actions have the intended impact on confidence.

If the ECB makes a misstep either in the calibration or communication of the package of measures now expected by markets in September there is a significant risk that confidence in the ECB’s capability to deliver its repeated goal of a sustained adjustment in the path of inflation towards its medium term target deteriorates rather than improves.

Another very important  channel through which negative policy rates work is the exchange rate. Indeed, as mentioned above, this has been the primary motivation for the policy in Switzerland and Denmark. Certainly, the movement to negative rates and ECB bond buying has coincided with a weaker Euro against the US dollar and a recent ECB research paper (4) concluded that the main transmission channel does not appear to be stronger aggregate demand impacting inﬂation through the Phillips curve, but rather exchange rate depreciation’.

A further currency depreciation would likely support stronger activity and somewhat higher inflation in the Euro area but it could also prompt some backlash from the US administration which is increasingly focussed on economic policy measures elsewhere that they feel are damaging to US trade.  It is almost impossible to say how forcefully the White house might respond to a rate cut related drop in the Euro but it would be unwise to entirely ignore potentially serious negative repercussions for US-Euro area trade.

To assess the likely impact of a further tranche of ECB easing, it may be useful to consider  the results of ECB unconventional policy thus far. When the ECB first moved its deposit rate into negative territory in June 2014, Euro area inflation was 0.5% at the headline level while core inflation was 0.7%  after a range of policy initiatives in the interim, inflation is now 1.0% at the headline level and just 0.9% on the core measure.

Of course, the outcome could have been notably worse in the absence of policy action. ECB estimates. A speech earlier this week by ECB chief economist Philip Lane (5) suggested ECB unconventional policy actions have boosted inflation by a cumulative 2% over the 2014-18 period. Moreover, as the graph below suggests, the contribution made by negative interest rate policy to this boost was relatively minor, peaking at around 0.25 last year. In circumstances where diminishing returns imply at best a marginal positive impact, the balance of risks around a further modest cut in rates may be tilted more towards harmful rather than helpful outcomes. 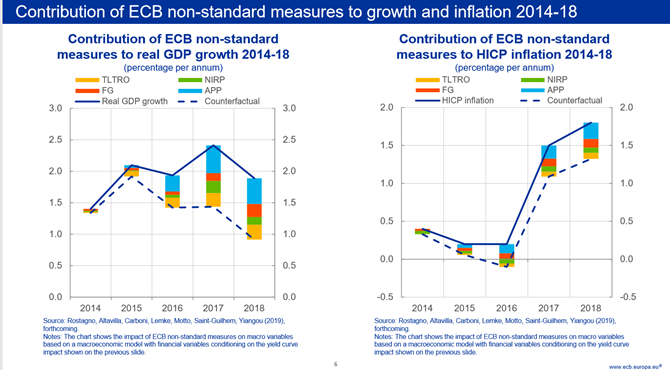 The ECB is in a difficult position. Feeble inflation and a faltering economy argue for a supportive policy position for some significant time to come. The ECB has repeatedly emphasised that policy actions work best in the form of the package but as the diagram suggests, the contributions vary markedly across elements and across time. In much the same way that doctors will vary the combinations of medications over the course of a treatment, it seems worthwhile considering whether certain elements might subtract from rather than  add to the effectiveness of a policy package at present.

The issue is whether cutting the deposit rate further into negative territory will prove to be the straw that makes the economy secure or undermines easing efforts. Most research evidence points towards, at best, significantly diminished returns from  a more negative deposit rate, with notable adverse risks to confidence and trade if the measure is calibrated or communicated incorrectly.

If the ECB wants to support economic activity further, Other options may be preferable. It may be that a carefully designed new Targeted Long Term Refinancing Operation (TLTRO) probably stretching out for four or five years offering even more sharply discounted terms linked carefully in a tiered manner to increases in new lending might avoid some of the negative side effects of a further cut in the deposit rate while prioritising new lending activity.

Ultimately, the exceptional nature of current problems means the previous assumption of the omnipotence of monetary policy is now questionable and an increased role for fiscal policy and structural initiatives is also likely to be required to put the Euro area economy on a healthy and sustainable trajectory. A fiscal stimulus would also deliver increased bond issuance that would makes the ECB’s Asset Purchase Programme more manageable and could facilitate an eventual  step-up in bond yields in the direction of more ‘normal’ levels.