Irish consumer sentiment improved again in May to its highest level since June 2019 as ‘opening-up’ optimism continued to build. While the broad swathe of economic news was positive, our sense is that the key driver of the pick-up in confidence was the developing story of increasing vaccinations and declining virus incidence in Ireland. The fact that the improvement in May was the strongest since December hints at growing positive momentum in Irish consumer confidence.

Stronger sentiment in May was driven by easing concerns about jobs and the general economic outlook as well as an improvement in thinking about household finances and spending. A view among Irish consumers that, in terms of economic and financial risks , the worst of the pandemic may be behind us meant that, in May, the KBC Bank consumer sentiment index recorded an increase for four consecutive months for the first time in more than five years.

The KBC Bank Ireland consumer sentiment index rose to 85.8 in May from 77.9 in April. The index now stands at its strongest level since June 2019 (90.7) and, as the diagram below illustrates, is effectively in line with the twenty five year series average of 86.8. These metrics suggest that Irish consumers are increasingly focussing on a post-pandemic world and beginning to consider what the ‘next normal’ might look like. 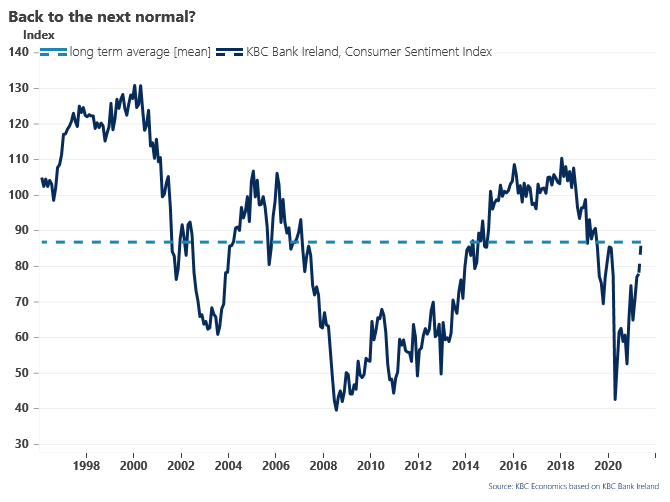 The May survey saw all five main elements of the consumer sentiment index post meaningful gains on their readings in the previous month. The sharpest improvement was in relation to employment, that presumably was driven by the prospect of a return to work in a range of sectors where the May survey period saw the announcement of the upcoming easing of health related restrictions. In addition, a steady stream of new job announcements continued, underpinning expectations for a materially brighter outlook for employment. As a result, the jobs component of the sentiment survey saw the first positive balance (technically, more respondents expecting unemployment to fall than to increase) since June 2019.

There was also a material improvement in the general economic outlook in May as economic indicators and commentary remained broadly positive. At the margin, increasing concerns around the outlook for housing may have constrained this element of the survey somewhat but moderate gains in recent official data on house prices and transactions pointed to a market currently in recovery mode.

We previously noted that ‘macro’ elements of the sentiment survey had borne the brunt of the pandemic related downturn in confidence reflecting a hugely more uncertain and potentially adverse outlook. Although concerns about personal finances intensified, strong working from home capacity and large fiscal supports ensured that at the aggregate level household incomes continued to rise in 2020 implying the immediate financial hit was limited for the majority of Irish consumers.

The details of the May survey show a clear easing of nervousness about household finances. It should be emphasised that Irish consumers remain relatively cautious about their personal financial circumstances but May saw a positive balance in relation to prospects for household finances in the next twelve months for the first time since May 2019. Roughly one in six consumers expect their financial circumstances to improve in the coming year compared to about one in eight that envisage a deterioration.

Irish consumers remain more positive on their financial futures than on their recent past. While assessments of trends in household finances through the past year also strengthened compared to April, it remains the case that one in four felt their circumstances had worsened compared to one in ten reporting their personal financial circumstances had gotten better in the past year. These results imply that the vast bulk of consumers are not feeling a material improvement in their household finances at present but, equally important, the May reading still marks an important step in an encouraging direction.

One possible influence on the more positive assessment of household finances may have been the anticipation of a notable and imminent increase in spending opportunities as health-related restrictions are eased. In this context,  the spending component of the sentiment index increased to its best level since March 2020. Again, it might be noted that this result suggests a level of spending in coming months that is healthy rather than white hot.