ECB cuts to historic lows and retains an easing bias.

• Action says more about change in ECB than change in economic conditions.

In something of a surprise today, the European Central Bank cut its key refinancing rate from 0.5% to 0.25%. It also cut its marginal lending rate from 0.75% to 0.5% but the deposit rate—already at zero—was left unchanged. In addition, the ECB announced that it would continue to hold all its principal refinancing operations as fixed rate tenders until at least the middle of 2015. This extends by a year the period during which the ECB will meet funding all demands for liquidity from commercial banks at its refinancing operations (the ECB had announced in May 2013 that fixed rate tenders would operate until at least the middle of 2014). Significantly, the ECB also retained an easing bias in its forward guidance.

Mr Draghi explained today’s rate decision as a response to a change in the inflation outlook. In fact, today’s move probably says more about a change in the ECB itself since Mr Draghi became president two years ago. The ECB is now prepared to act more quickly and more aggressively than in the past to support economic activity. Significantly, the response of FX and bond markets in the shape of a weaker Euro and lower interest rates suggests markets believe Mr Draghi when he said the ECB has not yet reached a lower bound on its capacity to ease policy.

In the past, ECB action has frequently been accompanied by indicators that policy was moving towards a more neutral stance. However, there was a clear determination today to emphasise that an easing bias remains in place. The press statement notes that the Governing Council ‘continues to expect the key ECB interest rates to remain at present or lower levels for an extended period of time’. Mr Draghi went on to say that in principle the ECB could rates further, that it was technically ready to move to a negative deposit rate and had even discussed negative deposit rates today. He added that the ECB had a whole range of instruments at its disposal but, perhaps surprisingly, indicated that the possible introduction of further Long Term Refinancing Operations (LTROs) hadn’t been discussed today. Indeed, he continued to downplay what he termed the ‘drama’ in market commentary about the implications of a reduction in excess liquidity.

Mr Draghi said that the ECB was ‘wholly in agreement on the need to act’ although there were some differences of opinion on whether that should come today or next month. To further emphasise the sense of a generally dovish Governing Council, Mr Draghi indicated that the decision on forward guidance was unanimous.

The fact that the ECB acted today and that it stressed it is willing and able to ease further if necessary are today’s key headlines but it is also very important to try and rationalise what prompted these developments. The answer is very simple according to Mr Draghi: he spoke of a change in the inflation outlook of late that they ‘judged to have been of significance’. He added that this change was evident both in the shape of the categories of goods affected or the length of time this was developing. These comments are very much at odds with last month’s assessment. Last month’s press statement spoke of an expectation of inflation remaining at broadly similar levels to September 1.1% outturn. So, it is very clear that the ‘flash’ October inflation reading of 0.7% came as quite a surprise to the ECB. 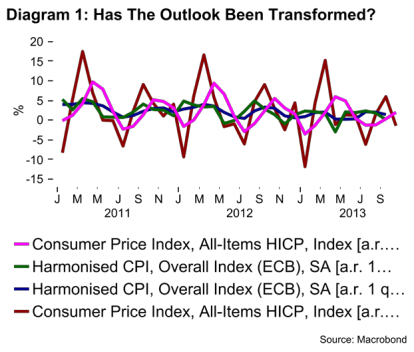 Mr Draghi’s assertion that there has been a clear easing in inflation of late isn’t all that evident from diagram 1 above, which hints at a somewhat erratic trend that is heavily influenced both by whether one annualises one, two or three month trends. Given the ECB’s longstanding ‘medium term perspective’, it seems most unusual to weight one or two month inflation data so heavily. Moreover as table 1 below indicates, inflation trends across categories of goods and services do not suggest a broadly based pivot point in price pressures of late. Instead, favourable base effects in relation to energy appear to be playing the principal role in softer inflation readings of late.

According to today’s press statement the ECB Governing Council now sees ‘a prolonged period of low inflation, to be followed by a gradual upward movement towards inflation rates below, but close to, 2% later on’. He said repeatedly that what was meant by ‘a prolonged period’ would become clearer when the ECB publishes its new projections in a month’s time. In that regard, it is notable that the latest EU Commission projections released earlier this week don’t see any notable change in the longer term inflation outlook as consumer prices are expected to rise by around 1.5% per annum this year and again in both 2014 and 2015 (although the cut off for the Commission forecasts predated the October numbers, it is doubtful that one month’s data could make a dramatic change to a multi-year outlook).

Significantly, Mr Draghi emphasised that the ECB do not see any major risks of deflation and he added that falling prices in some countries were signs of a needed adjustment in relative prices. However, in order to rationalise today’s move, Mr Draghi did move some distance from his previous comments in which he had highlighted the benefits of low inflation to household spending power. Today he set out four reasons why it was necessary for ECB policy to act to counter very low inflation. The first of these is a commonly acknowledged problem that in circumstances of very low inflation, it is easy to slip into a deflationary environment. We have highlighted the risks of uncomfortably low inflation in the past but as noted above, it is not clear that low October inflation data are sufficiently dramatic to suggest a potential tipping point in this regard that might justify today’s surprise action.

A second argument advanced by Mr Draghi today is that in a currency zone such as the Euro area significant relative price adjustments between countries are altogether more painful to deliver when aggregate inflation is very low. To the extent that Germany and other stronger Euro area countries have inflation rates well below 2% at present, it becomes very difficult for more troubled economies to sustain adjustments that imply ongoing declines in prices and incomes. These difficulties are exacerbated by a potential feedback loop as falling incomes and prices intensify debt sustainability problems.

Again, this argument has been widely made in recent years but it has rarely featured in public ECB policy pronouncements. As such it may reflect some subtle shift in power around the Governing Council table away from the traditionally hawkish elements. Whether this shift simply reflects the technical merits of this argument or points towards the growing influence of council members from ‘troubled’ economies isn’t wholly clear at this point. Some indications in this regard may come from the public statements of various ECB officials in the weeks ahead.

Mr Draghi also indicated two further related arguments for the stance now being taken by the ECB. He said that the effectiveness of monetary policy is reduced as inflation heads close to zero and that a fragile recovery needs lower ‘real’ interest rates. In effect, both of these relate to the problem that a drop inflation amounts to a tightening in monetary conditions. Mr Draghi strongly rejected any comparisons between the current situation in Europe and Japan’s ‘lost decade’. However, it is very clear that today’s actions and the strong emphasis on the ECB’s ability and willingness to do more points to a judgment that the problems posed by low or negative inflation are far better prevented than cured.

Our guess is that lower than expected inflation and higher than expected unemployment data in the past couple of weeks were swing factors in a debate on the durability of a fragile upturn that has preoccupied ECB and other policymakers in Europe and the US for some time. That said, we find it somewhat difficult to see any real sea change in the inflation outlook of late. Instead, we think today’s action and the accompanying promises made by Mr Draghi say more about a significantly changed ECB under his leadership.

We would also tend to put much more emphasis on the fact that action was taken today rather than the action itself. A relatively modest tweak to the refi rate will not make a marked difference to financial conditions in the Eurozone but it could be far more effective as a strong signal that the ECB is really prepared to do ‘whatever it takes’. This perception should be reflected in FX and interest rate markets at least in the near term. As we noted a month ago, the ECB is likely to continue a clear verbal easing but the real difficulty for Mr Draghi will come if markets begin to doubt the ECB’s capacity to make a dramatically stronger response if a faltering recovery or a further sharp drop in inflation were to suggest that was required.