Surprise Drop In Irish GDP At Odds With Most Other Evidence

• Data contrast with broad evidence of recovery from most other indicators.

• But GNP surge and jobs growth may err in opposite direction.

Irish GDP data for the final quarter of 2013 are difficult to explain and almost impossible to square with most other indicators of current conditions in the Irish economy. It should be noted that these are preliminary figures and could be revised significantly when the first full estimate of national income is released in June. However, in the interim these numbers may influence thinking on the nature as well as the speed of changes in the Irish economic climate.

We think underlying conditions in the Irish economy are notably healthier than these data suggest and we think an upward revision is likely in time as well as the possibility of some rebound in preliminary numbers for early 2014. That said, today’s data serve to highlight that the Irish economy is moving from a very weak place and the upturn is uneven across sectors and unlikely to proceed in a straight line.

On the basis that we think import growth may correct somewhat (see below) and consumer spending should be supported by employment gains, we are inclined to revise our current forecast of a rise in GDP of 2.3% for 2014 only marginally back from 2.3% to 2.1%.

We also note that today’s disappointing data only result in a fractional worsening of the reported Government deficit for 2013 from 7.3% of GDP to 7.4% of GDP. However, they underline the importance of improved economic momentum to achieve targets for 2014 and 2015.

What Does GDP Suggest?

The major surprise today was that GDP showed an unexpected and unusually large decline of 2.3% in the final quarter, the poorest three month performance since late 2008. In turn, this meant that for the year as a whole GDP fell by 0.3%, the weakest outturn since 2010. We don’t think late 2013 saw any significant weakening of the Irish economy. We certainly can’t see how it might be regarded as the poorest quarter in the past five years. We also believe the past year saw some uneven improvement compared to 2012. As a result, we don’t think today’s data can be regarded as a truly representative indicator of Irish economic conditions at present.

The main reasons for our questioning of the GDP data is the evidence of other key barometers of economic performance—most notably the trend in employment. As diagram 1 indicates, the broad trend in employment in recent years has tended to move in tandem with that in GDP but the GDP numbers are hugely more volatile and frequently tend to show large corrections that usually follow outsized moves in this measure of activity. Indeed, the gap between quarterly jobs and GDP data in the final quarter of 2013 looks to be the largest Surprise Drop In Irish GDP At Odds With Most Other Evidence13 March 2014 3 negative gap since the end of 2008 (when a 2.8% drop in GDP was followed by a 7.7% rise in the following quarter). 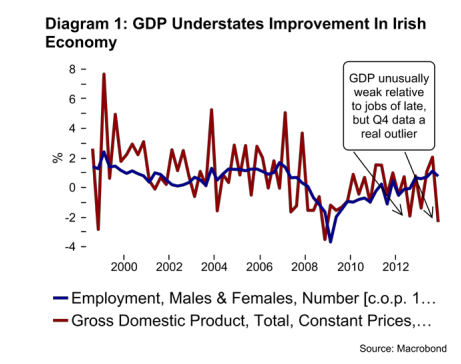 Jobs data for 2013 showed an average increase in full time equivalent employment of 2.5%. This would seem consistent with an economic growth rate in excess of 3% last year. As we noted in our analysis of the most recent jobs data, this probably exaggerates the true extent of improvement in the Irish economy last year. Hence, as noted below, we think the broad thrust of economic information is consistent with an underlying growth rate in the 1-2% range in 2013.

A sense that the GDP numbers rather than the jobs data are out of line with most other evidence is also suggested by table 1. 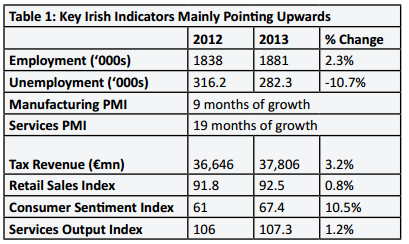 The drop in GDP in the final three months was primarily the result of an outsized 5.8% rise in imports. With final demand increasing by just 1.3%, the rise in imports looks about 4 percentage points higher than might normally be expected. If a more typical import pattern had been followed, we estimate fourth quarter GDP would have been about +1% rather than -2.3%. Unusually, today’s data show a rise of 11.4% in goods imports between the third and fourth quarters. Detailed merchandise trade statistics coincidentally published today show a rise of just 3.5% over the same period. While there can be small technical differences between the two data sets, this gap is difficult to explain.

It could be that there is some re-allocation of imports between quarters. Today’s CSO briefing also mentioned large machinery imports in late 2013. This could be consistent with a major investment undertaken for example by a multinational. However, the associated capital spending should also have appeared in investment figures for the final quarter. So, this can’t really explain the sharp drop in GDP in the final three months.

The surge in imports in the final quarter also means that they increased more rapidly than might have been envisaged for 2013 as a whole.  Again, a rough estimate would suggest that a more ’normal’ trend in imports would have resulted in GDP rising by 0.1/0.2% rather than falling by 0.3% last year.

On competitive grounds and the relatively subdued increase in exports, it might be expected that the import intensity of activity in the Irish economy wouldn’t increase in the manner seen particularly through late 2013. The fact that imports of aircraft fell makes this aspect of today’s data even more surprising.

As noted above, one possible interpretation of the rise in imports would be that the sharp rise in imports reflects one or two relatively large scale investment projects in the multinational sector and might point to a ramping up of capacity. In that event, we might expect to see the propensity to import ease back somewhat. On the other hand, there are also signs of some pick-up in imports of services in 2013 that may reflect some switch in the relative importance of royalties and profits outflows.

The rise in imports was not the only surprising element of today’s data. The drop in consumer spending in the final quarter was unexpected. Household spending fell by 0.6% in spite of solid retail sales, some strengthening in VAT receipts, improving consumer sentiment and a stronger jobs market. While we didn’t anticipate a surge, we are somewhat surprised by this number. That said, it does caution that for most households spending power remains constrained.

Much of the concern in regard to Irish GDP growth for 2013 in advance of today’s numbers related to the impact of the expiry of patents on a number of pharmaceutical products. We don’t think they account for the peculiarly weak 4th quarter outturn as goods exports increased marginally (+0.3%) through that period. Moreover for 2013 as whole, goods exports fell 3.9%, a not entirely different pace to the 3.6% drop seen in 2012. That said, there is undoubtedly some significant impact from a €4.6bn drop in the value of chemicals exports last year. This figure equates to some 2.8% of GDP. However, an examination of industrial output data would suggest a notably more limited scale of impact. Unfortunately, it is not possible to extract the precise effect of the patents issue from these national accounts data. That there is significant influence from variations in multinational activity is clearly hinted at by a 3.4% rise in GNP in 2013 also revealed in today’s data.

As GNP data exclude profits earned by multinationals in Ireland, they serve as a check on the impact changes in these companies’ activity levels have on GDP data. We would be reluctant to suggest that GNP data represent an entirely satisfactory summary measure of Irish economic performance but they highlight the problems in a mechanical use of GDP. For these reasons, we think 2013 is best regarded as a year of uneven improvement in the Irish economy. The unevenness of the recovery as well as the outsized impact various developments in the multinational sector have on Irish economic statistics makes it very difficult to assess the true condition of the Irish economy. It certainly means one number summaries, such as GDP, need to carry a significant health warning.