Sharp jump in sentiment to best level in seven months

The KBC Bank/ESRI index of Irish consumer sentiment improved in January after declines in four of the previous five months. The stronger confidence reading for January reflects a number of influences, some of which may be short- lived and others which give some grounds for optimism about Irish economic prospects in the year ahead. Our sense is that sentiment readings may remain choppy in coming months reflecting an Irish consumer who is facing into a quite uncertain 2017.

An important factor in last month’s improvement is a seasonal tendency towards a stronger sentiment reading in January that probably reflects several aspects of consumers’  experiences of the Christmas period. On the basis of some admittedly crude calculations, we reckon this was responsible for about three quarters of the month on month rise in the index.

One obvious element is the boost that post-Christmas sales give to spending plans. At a more subconscious level, confidence readings may have been boosted by a significant change in focus away from economic news towards family and friends over the festive period as well as a sense of optimism and resolve that the new year may bring. However, as in previous years, it seems likely that these supports to sentiment will prove temporary as consumers ‘ wallets and mind-sets re-tune to more familiar and gloomier messaging in the months ahead.

The mood of Irish consumers in January may also have been lifted by the same forces that saw healthier confidence readings in a range of other countries last month. In the US, this reflects a continuing economic and market honeymoon for the new Trump presidency which produced the strongest US sentiment reading since January 2004 as well as repeated new highs in equity markets. As diagram 1 illustrates there may be some spill-over from these development to the Irish consumer sentiment reading for January. 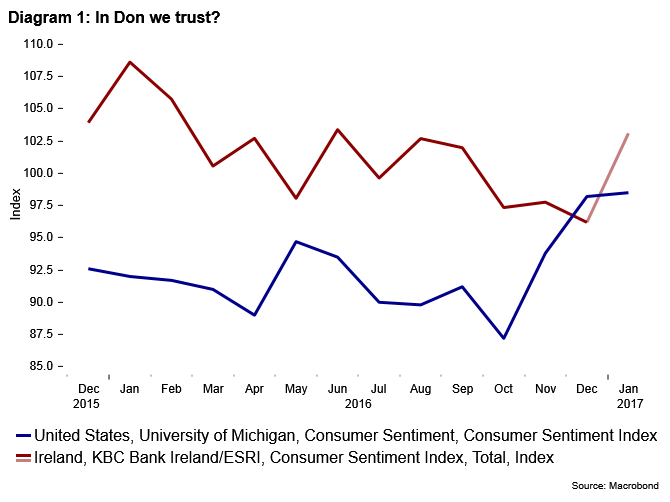 The current re-think about the prospective economic and financial consequences of the Trump presidency in the US may fall due for further re-assessment in the months ahead. Moreover, it can’t be interpreted as an endorsement by Irish consumers of the economic or other policies of the new US administration. This simply reflects a ‘relief rally’ form of reaction to the absence of a widely feared immediate economic and financial fall-out and the emergence instead of a notably more positive than anticipated trend in a range of relevant indicators of late. This exclusively economic evaluation of developments over the past month or so may be offering some support to confidence measures in Ireland and indeed across much of Europe last month as well as in the US.

We also think the uptick in Irish sentiment in January emphasises that consumers here are still cautiously positive about the future and recent softer survey readings primarily relate to perceptions of increased risk rather the reality of deteriorating economic conditions in the Irish economy. Encouragingly, in this regard the January survey recorded gains in all of the five main components of the survey and, in each instance, there were more positive than negative responses to the relevant question.

The KBC Bank Ireland/ESRI Consumer Sentiment Index increased to 103.1 in January from 96.2 in December.  This represents the biggest monthly gain in two years but, as noted above, this likely owes much to a seasonal tendency towards outsized gains in the first month of the year; the three largest monthly increases in the past 12 years were all in January, with two of these coming in the past five years. On a rough application of a seasonal correction process to the monthly numbers, we estimate that about 75% of last month’s increase can be explained by seasonal influences. However, the form in which the questions in the survey are asked (which relate to a twelve month comparison) and the absence of a stable seasonal pattern in the data means we do not seasonally adjust the monthly results.

The most notable monthly increase in the January sentiment survey related to buying intentions. This presumably reflects a response to substantial price discounting in the post-Christmas sales as well as the lure of new year registration plates to car buyers.  The recovery in this element of the survey to its best level in five months also marks a departure from the weakening trend seen through most of the second half of 2016, a trend that was also seen in retail sales. A very basic seasonal correction of these data suggests that the January reading implies a flatter underlying trend of late rather than any marked rebound in consumer spending.

An upgrading of consumers’ assessments of their own financial circumstances in January was largely driven by a decline in negative responses rather than any marked increase in positive responses compared to the December reading. The change in the jobs component of the survey was more balanced but still slightly tilted towards fewer negative readings. In contrast, a healthier assessment of the outlook for the Irish economy-albeit from a relatively low base in December- reflected a clear increase in the number of consumers expecting a strengthening of economic conditions in the year ahead.

These details of the January sentiment survey appear consistent with the view that the improvement in sentiment last month owes much to seasonal influences on consumer thinking. There are also tentative signs of an easing in nervousness about the general economic outlook that may be the result of an altogether less negative immediate economic and financial response to the incoming Trump administration in the US than had been widely feared.

In both respects, the January sentiment survey offers a measure of encouragement for the outlook for Irish consumer spending in early 2017 but the survey also hints at the possibility of further challenges in the months ahead.