…and are offset by improved personal finances and seasonal spending plans

Will the rollercoaster Irish economy continue in 2019?

Irish consumer sentiment held steady in December as the worrisome influence of a more threatening economic outlook was offset by a seasonal uplift in views on household finances and spending plans.

The December reading hints that consumers are struggling to weigh the risk of a very threatening if still uncertain Brexit against the reality of modest gains in spending power that might allow some seasonal uplift in spending.

The KBC Bank/ESRI Consumer Sentiment Index was unchanged in December from its November reading of 96.5. This is quite an unusual outcome and the last time the level of the sentiment index was identical to that of the preceding month was as far back as 1998.

We would not interpret the unchanged sentiment reading as suggesting there is any significant measure of stability in Irish consumer confidence at present. Instead, our sense is that Irish consumers continue to have considerable difficulties in assessing both the likelihood and possible impact of potentially important changes in their circumstances in the year ahead.

We think the current level of the sentiment index is consistent with an increasingly cautious but still broadly positive mood among Irish consumers. However, it should be noted that this is only the second time in the past eight years that the December reading has been lower than that of twelve months earlier. The previous drop occurred in 2016 when consumers were starting to grapple with the possible implications of Brexit. Our sense is that similar Brexit-centred concerns have been the primary if not the only driver of the pullback in sentiment seen in the second half of 2018.

Reflecting different ‘local’ dynamics, sentiment readings diverged across countries in December. In the US, sentiment improved marginally to conclude the strongest year of readings since 2000. This reflects a US economy producing strong gains in activity and employment and tentative improvements in wage growth.

In contrast, Euro area consumer confidence posted its weakest reading in twenty one months. This finished off a disappointing year where sentiment had trended progressively lower from a January high point in line with an economic performance that fell increasingly short of expectations and prompted growing political and social tensions in a number of countries.

In the UK, the latest consumer confidence reading suggests the adverse implications for both the British economy as a whole and household living standards of a ‘no deal’ Brexit appear to be hitting home.  The December outturn was the weakest monthly reading since July 2013 and confirmed the largest quarterly drop in consumer confidence recording since immediately after the referendum in 2016.

The Irish consumer sentiment reading for December showed a stark split with marked monthly declines in the two ‘macro’ elements of the survey and gains of varying size in the three ‘micro’ elements. This divergence reflects the contrast between substantial downside risks now evident in the outlook for the Irish economy and continuing if modest and uneven gains in the circumstances of the average Irish consumer of late. Our sense is that consumers’ positive assessment of the latter may also have been boosted by seasonal spending plans.

Probably the most notable aspect of the December sentiment survey is the extent to which Irish consumers continued to downgrade their outlook for the Irish economy. The proportion that expect a stronger Irish economy over the next twelve months ( 26%) fell below the number expecting weaker conditions (32%) for the first time since August 2013.

Clearly, consumers increasingly fear that the UK may crash out of the EU in three months’ time but it is also likely that growing concerns worldwide about global trade and faltering financial markets contributed to a gloomy ‘macro’ view.

Not surprisingly, views on the outlook for jobs also weakened in December but the monthly change was somewhat smaller and overall more consumers continue to see Irish unemployment falling (31%)  than rising (21%) in the year ahead. Our judgement is that this reflects the offsetting comfort of a continuing strong flow of new job announcements. However, as the steady December jobless reading hints, further improvements in this area may be notably more modest than in the past.

It may seem surprising that at a time when they became notably more pessimistic about the outlook for the economy as a whole, Irish consumers were also more upbeat about their own personal financial circumstances. However, all three elements of the survey related to household finances were stronger in December than in November.

The most notable change came in consumers’ views as to how their household finances had evolved in the past year where negative views had predominated for each of the previous three months. In contrast, in December, 26% per cent of those surveyed reported an improvement whereas 20% reported a deterioration.

At the margin, this change in thinking may owe something to a notable decline in oil prices and significant Pre-Christmas price discounting.  It may also reflect some modest improvement in household spending power as consumers looked back on a year in which income growth, while modest, outpaced inflation.

We think there may also be a sense in which the reality for many households of even limited gains through the past year may now have assumed even greater importance in light of increased ‘macro’ concerns. It is probably only a slight exaggeration to describe this as a case of ‘eat, drink and be merry for tomorrow we Brexit ‘. However, this element of the December sentiment survey seems to suggest a measure of seasonal positivity which may have been boosted by an awareness that this may be as good as it gets and the coming year might threaten more than belt tightening.

While the outlook for household finances in the coming year and spending plans also improved slightly in December, the changes were relatively modest and may hint at the need to ensure household spending does not move onto an unsustainable path. In this regard, we continue to expect solid rather than spectacular gains in consumer spending and see the trend in sentiment as entirely consistent with the more subdued pace of increase seen in November retail sales data and in anecdotal reports about spending patterns over the Christmas season.

Rollercoaster Irish economy reflected in large swings in sentiment. Will 2019 be more of the same?

As the December survey highlighted marked differences between consumer thinking on the outlook for the Irish economy as a whole and their own personal financial circumstances, we thought it might be worthwhile to look back at the degree to which these ‘macro’ and ‘micro’ influences on sentiment have moved through the history of the survey.

As the diagram below highlights, fluctuations in consumers’ views on the Irish economy have been notably greater than their assessment of their own circumstances through the past twenty years. In part, this simply reflects the reality that the conditions experienced the typical consumer change far less than that of the broader economy which is driven by frequently large changes in numbers living and working here as well as developments in intrinsically volatile areas such as exports and investment.

This was particularly true of the past twenty years in which a rollercoaster Irish economy soared and shrank and surged again. Inevitably, reflecting such dramatic changes in the broader environment, changes in personal circumstances have also been substantial as the range of the ‘micro’ index running from just above 60 to almost 140 suggests. However, as the graph illustrates, changes in the circumstances of the typical Irish consumer have been less pronounced than for the economy as a whole.

In addition, it should be remembered that the sentiment index measures consumers’ perceptions of the Irish economy and their own financial circumstances. As the ‘macro’ index records ex ante expectations, encompassing fears and hopes about an increasingly uncertain economic world, it is almost inevitable that this measure of ‘animal spirits’ occasionally overshoots in either direction. The burning question as 2018 begins is whether Brexit developments will develop in a manner that proves Irish consumer sentiment is now either too cautious or too complacent. 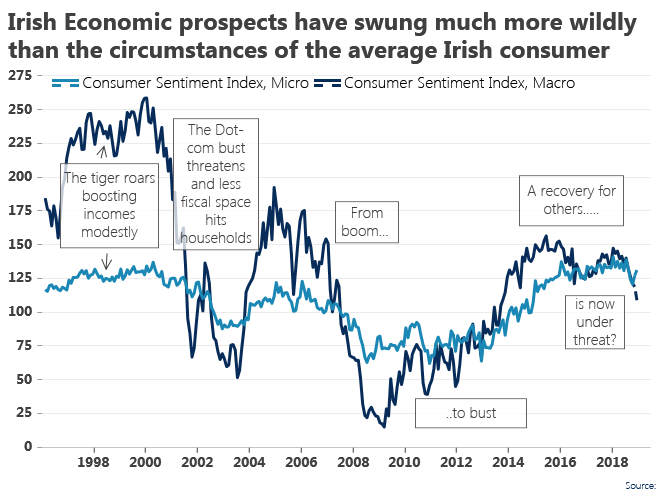