• Migration data show exceptional population ‘churn’ with 3% of population moving in or out in 2012.


New CSO data show Ireland’s population continues to grow modestly as a persistently strong ‘natural’ increase (significantly more births than deaths) more than offset slightly higher net outward migration. As a result, in the twelve months to April 2012, Ireland’s population grew by 10.5K, an increase of 0.2%. As diagram 1 below indicates, Ireland’s population growth has slowed sharply in recent years but it has remained positive in spite of a dramatic turnaround in migration flows. This largely reflects the persistence of an unusually large natural increase that primarily stems from a relatively high birth rate. 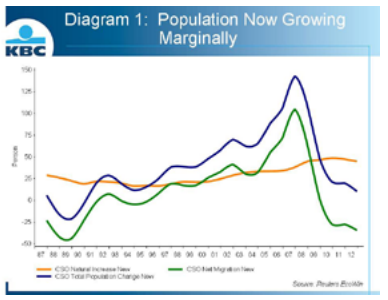 Migration Flows Are Very Large And Not Just In One Direction


Coupled with revisions resulting from last years census, today’s numbers suggest that inward and outward migration flows have been somewhat greater than previously thought but the intensity of emigration has been notably less than suggested in some commentary. There has been a marked step-up in outward migration from 0.6%/0.7% of the population during the boom years in the middle of the last decade to 1.9% of the population in the past twelve months. However, in spite of the weakness of the Irish economy, there was also inward migration equivalent to 1.1% of the population in the past year. This may owe something to shortages in language and other skills in the domestic workforce for some emerging job vacancies that attracted non-Irish nationals to this economy. It also hints that a significant amount of recent emigration might be relatively short term in nature. So, today’s numbers hint at an exceptional degree of population ‘churn’ or turnover in Ireland in recent years.

The detailed migration flow data show that emigration by Irish nationals picked up sharply in 2009 (to 19K from 13K in the two previous years) and continued to climb in the interim, although the modest increase reported between 2011 and 2012 (from 42K to 46.5K) could suggest we may be approaching peak emigration rates if Irish economic conditions stabilise. The fact that emigration out of Ireland by nationals of the EU Accession States peaked in 2009 (at 30.5K) and has since eased (to 14.8K in 2012) also points towards the possibility that net emigration may be close to peaking. The broad stabilisation in migration inflows at slightly higher levels (of 53K in 2011 and 2012) than seen in 2010 (42K) also suggests the net migration position may be close to stabilising at least in the short term. However, the scale and speed of changes in Irish migration flows argue for a significant degree of caution in making any definitive statements in this regard. 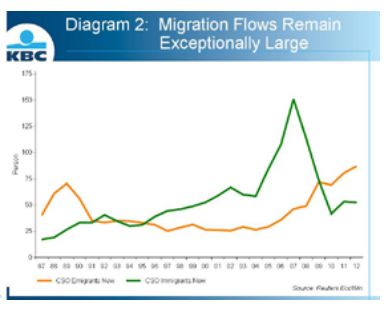 The rise in Ireland’s population in the past twelve months at 0.2% is slightly smaller than the 0.3% increase posted for the European Union as a whole. However, the factors driving population change here and in most other European countries are entirely different. Population change in Ireland reflects the virtually offsetting influence of two strongly conflicting factors. Ireland’s natural population increase at 1.0% is more than ten times that seen elsewhere in Europe (0.08%) while Irelands net migration outflow 0.8% also dwarfs the net migration inflow of 0.2% reported for Europe as a whole. Again, these comparisons emphasise how dynamic and exceptional population changes have been in Ireland in recent years.

In the near term, the persistence of significant net emigration will weigh on activity levels in the Irish economy. However, the scale and two-way nature of Irish migration flows in recent years suggests the impact of rapid population “churn” particularly in younger more mobile age groups may also be an important characteristic of the Irish economic landscape. For example, this would tend to support residential rents relative to house prices. Among other things, it might also tend to raise the incidence of short term working contracts and the use of public transport. While such developments may be overwhelmed by the prevailing macro climate, the flexibility of the Irish economy to respond to these sorts of changes could significantly influence future competitiveness. Looking beyond the near term, the persistence of a strong natural population increase has significant implications for an eventual turnaround in construction and will also place increased demands on the education sector.