Irish consumer sentiment weakened slightly in August as consumers reined in their spending plans and continued to report only limited gains in their personal finances from a healthy Irish economy. At current levels, the survey suggests sentiment is broadly positive but Irish consumers are still cautious because household spending power remains constrained.

The KBC Bank/ESRI consumer sentiment index fell to 102.9 in August, a relatively modest drop from the 17 month high of 105.1 recorded in July.  The underlying trend as measured by the three month moving average of the sentiment series remains modestly positive (climbing to 104.3 last month from 103.5 previously). The same interpretation is also suggested by the fact that positive responses outnumbered negatives to each of the survey’s five key questions.

The broad message of the August data is that Irish consumers remain positive in relation to the prospects for the Irish economy and the outlook for jobs. Last month’s readings for these two elements of the survey were the strongest since June 2016 and suggest that the significant fears that surfaced in the wake of last year’s UK referendum vote to leave the EU have gradually eased even if they haven’t entirely faded.

The persistent strength of key Irish economic data in the past year together with an almost continuous stream of new job announcements have been the key factors in what has been a gradual and careful upgrading of the economic outlook by Irish consumers. The absence of a widely feared collapse in the UK economy or radical changes in US economic policy  together with the emerging view that Brexit could  prove to be a long drawn out process may also have played some part in this re-assessment.

It should be emphasised that the survey details do not suggest consumers anticipate a return to the scale of gains seen during the ‘Celtic Tiger’ era. Just 53% of consumers expect the Irish economy to strengthen further in the next twelve months but it is perhaps more telling that just 13% expect a deterioration, the lowest number since February 2016. Similarly, 47% see unemployment falling further in the year ahead but just 20% expect it to increase. So, the upgrading of the ‘macro’ backdrop in the August survey is more a story of easing gloom rather than widespread expectations of a return to the boom.

The sense that the ‘macro’ environment is solid but not spectacular at present implies notably more limited progress and prospects at the level of the individual consumer. A key message of the survey for some time is that it is not possible to equate the scale of improvement in the Irish economy at large with the change in fortunes of the average Irish consumer. Clearly, some consumers have benefited substantially from a return to work and/or from significant growth in incomes but such developments are atypical.

As noted in last month’s commentary, at the aggregate level, Irish households’ share of the national economic ‘cake’ has been on a steadily declining trend in recent years.  An unsettling combination of increased uncertainty about the economic future and a greater disconnect between recent ‘macro’ gains and household finances has resulted in the relatively choppy nature of survey readings through the past  year or two as diagram 1 below illustrates. 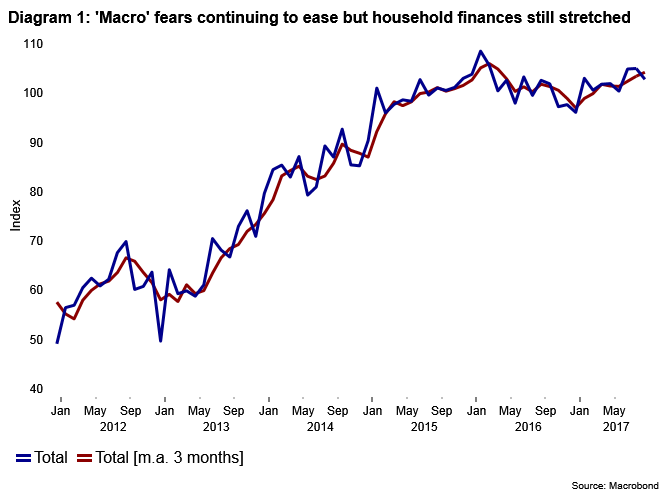 With income growth for many modest at best and significant ‘legacy’ problems from the crisis, pressures on household finances remain widespread. In turn, this means that those seeing a clear improvement in their personal financial circumstances either in the past twelve months (25% of consumers surveyed in August) or in their prospects for the year ahead (27% of those surveyed) are notably smaller than those not seeing any improvement and also well below the number of consumers expressing positive views on broader ‘macro’ prospects. This makes the survey particularly sensitive to any change in household financial circumstances.

After what we suspected might be a temporary uplift to spending plans in July in response to summer sales and holiday plans, we are not entirely surprised that consumers downgraded their assessment of their household finances in the August sentiment survey. A renewed focus on areas such as back to school spending and rising housing costs together with a range of commentaries suggesting little scope for ‘giveaways’ in the upcoming Budget likely highlighted the continuing difficulties many consumers are having in balancing their households’ incomes and outgoings.

In summary, the August survey gives some sense of the contrasting forces influencing Irish consumer sentiment at present.  Current conditions are relatively positive at the ‘macro’ level and notably less threatening than had been feared in the wake of the Brexit vote or the US election outcome. However, there are still too many uncertainties for consumers to be entirely confident that the upswing will persist and even fewer grounds to believe that anything approaching a return to the boom might be in prospect.

Moreover, consumers remain notably underwhelmed by the impact the recovery has had on their personal financial circumstances to date and most do not see any marked improvement in their household spending power in the next twelve months. As a result, the details that underlie the slight pullback in the August survey remind us that Irish consumer sentiment is broadly positive but also brittle.