Irish consumer sentiment held broadly steady in April as increased caution about the outlook for household finances offset a slightly more positive view of prospects for the Irish economy.  The details of the survey suggest a mood of cautious optimism still prevails but there is also a strong sense of an upswing that is being earned or even endured rather than enjoyed.

A notable feature of the survey through the past year is the extent to which the majority of Irish consumers are struggling to make sense of an uncertain economic outlook and continuing pressures in their personal finances. While there may be a feeling that things are gradually getting better, there is little indication of anything approaching a boom. Caution is the most important characteristic of Irish consumer confidence at present.

The KBC Bank/ESRI consumer sentiment index stood at 102.0, effectively unchanged from the March reading of 101.9 and little different from the April 2016 reading of 102.9. In recent months, the index appears to be consolidating having recovered from a notably weaker performance through the second half of 2016.

As diagram 1 below indicates, this trend in Irish consumer sentiment is broadly consistent with a somewhat firmer tone in underlying retail sales growth of late. As such, it appears consistent with a clear but modest improvement in consumer spending in early 2017. 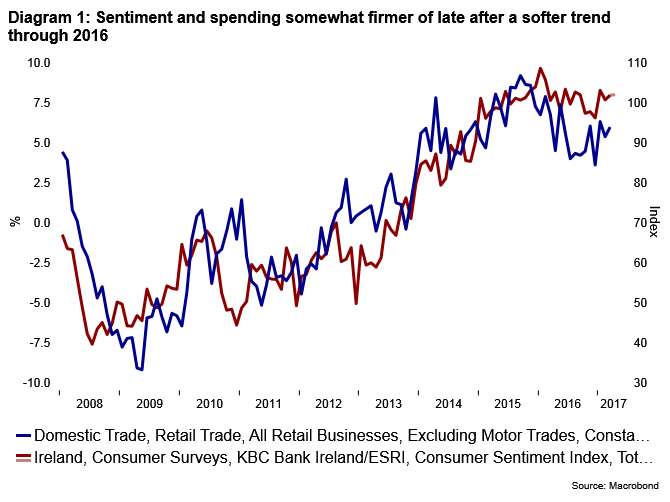 The unchanged April sentiment reading for Ireland must be seen in the context of mixed reports on confidence from other economies last month, an outturn that emphasises the diverse influences on the mood and spending power of consumers around the globe at present. In the US, consumer sentiment was also unchanged from March but this summary number concealed major differences in views on the economic outlook according to the political leanings of the survey respondents (with Republican voters notably more upbeat than their Democrat counterparts). As is the case with the Irish data, this result emphasises the problem in trying to describe complex and contrasting circumstances in a single numerical estimate.

Consumer confidence in the Euro area showed a modest improvement in April but one that was broadly based in a geographic context as stronger economic conditions and some easing of political concerns encouraged an improvement that matched the reading of March 2016 as the healthiest since mid-2007. In contrast, UK consumer confidence declined for the third month in a row as rising inflation took a toll on expectations for the economy and household finances.

With global influences on sentiment mixed and clouded, an unchanged Irish reading for April is not entirely surprising. Encouragingly, views on the outlook for the Irish economy recovered to their healthiest level since last August. The threats posed to activity and employment by developments such as Brexit and potential changes in US tax policy while still material now appear less immediate as a sequence of stronger economic indicators and upgrades of forecasts for the Irish economy continued through the survey period.

In a similar vein, a persistent stream of new job announcements coupled with a strongly declining unemployment rate has prompted increased confidence about the outlook for jobs. In both of the ‘macro’ elements of the survey, the improvement in April came as a result of a greater incidence of positive views. This contrasts with the predominant trend in the survey of improved sentiment coming as a result of an easing in negative responses rather than a marked increase in positive views.

In marked contrast to stronger readings on the general economic outlook, the April survey found a slight worsening in consumers’ assessments of their own household finances. The survey period saw a number of reports focussing on higher fuel prices and health insurance costs as well as high profile industrial relations disputes that could have diminished expectations for pay growth. These developments may have contributed to the weakening in this element of the survey.

It should be noted that positive responses on household finances continue to outweigh negatives. However, the share of positive responses declined relative to March both in relation to trends through the last twelve months and expectations for the year ahead. In both of these areas, only one in four Irish consumers is now reporting an improvement in their own financial circumstances, a result that implies the scope for a broadly based surge in consumer spending is limited.

The April survey did suggest some pick-up in spending intentions. In light of the more downbeat assessments of household spending power, we think this may reflect some Easter–related increase in outlays rather than any marked change in behaviour. The survey suggests constraints on household finances and uncertainty about the future are likely to prevent ‘animal spirits’ from being a key driver of more buoyant household spending in 2017. Instead, the primary driver of stronger consumer spending at the macro level in Ireland remains increased employment with price discounting and the replacement cycle for consumer durables playing supportive roles.