Irish consumer sentiment improved solidly for a second month in December as significant signs of light both in terms of Covid-19 and the Irish economy emerged after what has been a very tough year for many households and firms.

The survey period saw a declining trend in new Coronavirus cases in Ireland and a related easing in domestic health-related restrictions that coincided with positive news on vaccines. Together with very positive Irish economic growth data and a continuing flow of new job announcements, this helped ease some of the concerns that have weighed on confidence and consumer spending through the past nine months.

The KBC Bank Ireland consumer sentiment index increased to 74.6 in December from 65.5 in November. The December index is the strongest since March (75.5) and materially above the low point seen in April (42.6).

Although the KBC Bank consumer sentiment index is focussed on economic and financial developments, the over-arching impact of the pandemic through most of 2020 means the path of the virus has dominated Irish consumers’ thinking both in terms of their present circumstances and their future prospects.

As the diagram below illustrates, fluctuations in consumer sentiment have tended to move in step with changes in the trend in Covid cases in Ireland. Encouragingly, it seems that Irish consumers are responsive to good as well as bad news in relation to the coronavirus. On this basis, it would seem that the December survey might suggest Irish consumers believe the worst of the pandemic is now firmly behind them. 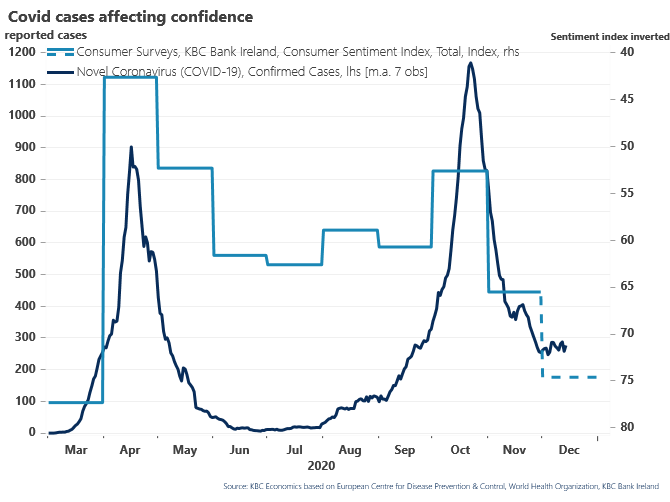 While 2020 ends with a December sentiment reading of 74.6 that is well below the opening figure of 85.5 seen in January, this should be seen as an encouraging outcome given the scale of challenges faced by consumers during the year. Our sense is that these numbers will translate to solid if unspectacular Christmas period in terms of consumer spending.

Although we think that returning confidence will support consumer spending, it should be noted that the strongest improvements in the December survey came in relation to prospects for jobs and the general economic outlook rather than any dramatic uplift in household financial circumstances.

The release of buoyant Irish economic growth data and the related prospect that the full year outturn for GDP would be positive rather than post a double digit decline as had been widely predicted earlier in the year may have encouraged more positive thinking on the economic outlook but a more practical consideration is likely to have been the continuing strong sequence of new job announcements from  employers as diverse as Microsoft and Supermac during the survey period.

An important but limited number of consumers have suffered a significant deterioration in their financial circumstances because of the pandemic. These have been predominantly those workers on lower earnings and, at least in the near term, such losses have been significantly offset by wide-reaching fiscal supports.

In turn, this means that easing of restrictions hasn’t directly translated into a materially  positive ‘income effect’ that would boost spending. Instead, the outlook for spending over Christmas and into early 2021 is likely to be determined by the relative strength of two opposing influences; the release of pent-up demand and the persistence of precautionary savings.

The December sentiment survey suggests that even though they are less fearful now than previously, Irish consumers are still overwhelmingly cautious about the outlook for their household finances in the year ahead. Some 11% expect they will be better off in 2021 whereas 21% think they could be worse off.

In the same vein, the buying climate was the element of the sentiment survey that saw the smallest monthly improvement in December. For these reasons, we think Christmas 2020 will see mixed rather than marvellous conditions for those firms catering to Irish consumers.

That said, we would envisage some further modest trend rise in consumer spending in the final month of 2020, an outcome consistent with the evidence of the diagram below. The diagram suggests that the fall in spending in the second quarter was far larger than would be suggested by poorer sentiment and owed much to health related restrictions on spending capacity. However, the rebound in the third quarter was broadly consistent with sentiment and, as such, the diagram below doesn't suggest a 'wall of money' that has been saved by Irish consumers is being released as soon or  as sharply as eased restrictions allow.

In part, this is because those who have accumulated savings are likely to be those who are naturally more inclined to save (ie those on higher incomes tend to have a higher marginal propensity to save normally and might also be more inclined towards precautionary savings in current circumstances) whereas those suffering income losses through the pandemic are more likely to be those naturally inclined to spend most of their earnings (ie they would tend to have a higher marginal propensity to consume). In turn, this implies the likelihood of solid rather than spectacular Christmas spending. 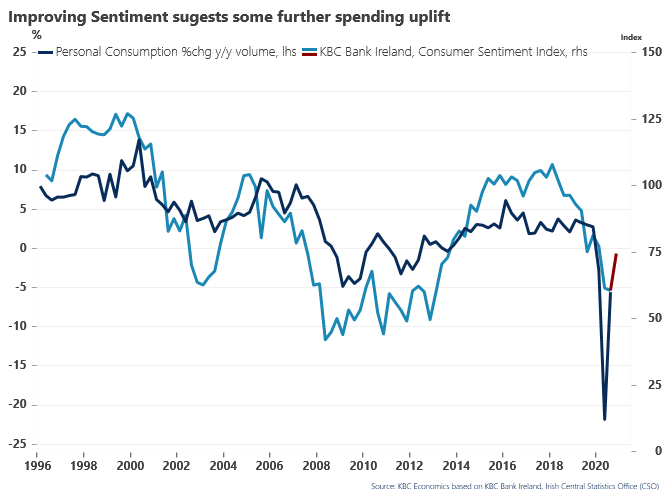 A solid rather than spectacular outlook for spending is also suggested by responses to a special question we included in the December survey. The analysis of these results below by Shawn Britton of KBC economics,  suggests that caution and constraints,both on spending power and social contacts, mean that, in aggregate, consumers are unlikely to simply compensate for lower spend in areas such as entertainment by higher spend on areas such as presents.

We asked additional questions to gauge how Irish consumers’ financial situation this Christmas compares to last year. This found:

About two in five Irish consumers (41%) said that they had less money for Christmas spending than last year while roughly the same proportion (39%) say it is unchanged.

Nearly half (47%) said they will spend less on Christmas presents than a year ago.  This may be due to many factors, including income loss, increased uncertainty or even fewer social contacts over Christmas.

Roughly two out of every three (63%) Irish consumers expected to spend less on Christmas entertainment this year than last.