Responses to a special question added to the KBC bank consumer sentiment survey for May suggest Irish consumers do not plan to go wild in their holiday spending in 2021.

One in four plan to spend the same as in 2020 and while slightly more plan to spend more than to cut back (19% against 12%), the average outlay overall is likely to be broadly unchanged from last year.

While this points to a solid rather than spectacular season for the domestic tourism industry overall, we would highlight likely major differences in individual circumstances as suggested by the contrast between the intentions of some 11% of Irish consumers who plan to increase their spend by more than 10% against a broadly similar number (12%) who plan to spend less than last year.

Just over half of Irish consumers (54%) now plan to have a summer holiday in 2021 and a further 12% have yet to make up their minds. A notable number do not intend a getaway;

Some 19% of consumers say they are unable to afford a holiday this year. Although this figure may appear high, it seems broadly consistent with the 22.4% Covid-adjusted unemployment rate for May in capturing a cohort facing significant financial uncertainty at present.

A further 15% say they won’t go on holiday for other reasons with the vast majority of these citing Covid-related concerns Roughly 80% of those giving this response-some 12% of those responding to the survey- mentioned Covid and related health worries as the reason they would not take a holiday this year. Other reasons given ranged from seasonal work, through having no interest in taking holidays or undertaking home refurbishment projects to pregnancy.

A further substantial 12% of those surveyed say they are unsure at present as to whether they will take a holiday this year. Some portion of these responses may reflect uncertainty abut the extent and timing of any easing of foreign travel restrictions or a more general difficulty in assessing what is a fluid situation in terms of the pace at which a more general normalisation of tourism, both domestic and international, may occur.

Not surprisingly, holiday plans were strongly related to financial circumstances; some 32% of those who report they are making ends meet with difficulty say they can’t afford a holiday compared to only 5% who class themselves as comfortable. In the same vein, affordability constraints were most pronounced in the 45-54 and 35-44 age groups. However, other reasons for not taking a holiday this year-primarily driven by Covid concerns, were more prevalent among financially comfortable consumers and those aged over 55.

These responses were given to a supplementary question asked in the KBC Bank May consumer sentiment survey. As this survey showed a rise in Irish consumer confidence to a 23 month high driven in large part by ‘opening-up’ optimism, it might be expected that consumers would be notably keen on enjoying a summer break. However, the responses to the survey as a whole and to this special question suggest that (i) a significant element of caution persists in general, and (ii) a substantial number of Irish consumers remain financially constrained or facing uncertain futures to the point where holidays are out of reach. 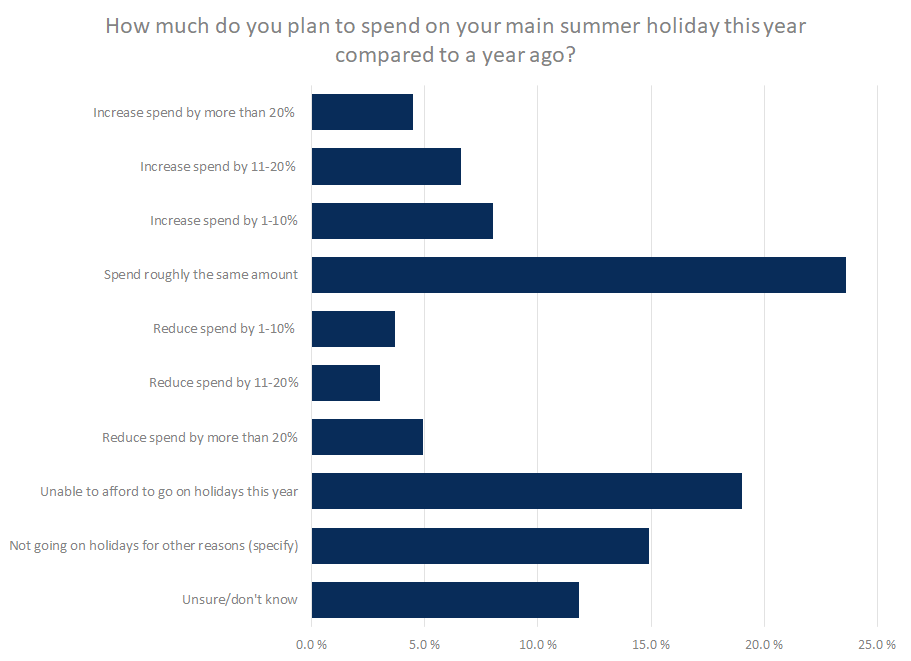 These survey results can be assessed in the light of a CSO survey on travel expectations taken in February 2021. The CSO survey found that 69% of consumers intended to take a holiday in Ireland this year while 26% said they would not take a holiday. Although survey methodologies and sampling may explain some of the differences in the two results (the KBC Bank survey does not distinguish between domestic and foreign holiday and also includes a don't know option), it may also be that the persistence of Covid-related concerns and associated financial fallout as well as restrictions on foreign travel have translated into some pull-back in holiday plans of late.