August sentiment index recovers to 101.1–above 100 for only third time in ten years.

Irish consumer sentiment increased marginally in August, suggesting an improving trend remains firmly in place even if a range of influences may be making consumers a little confused about the scale and sustainability of the economic recovery now underway.

The August sentiment survey marks only the third time in ten years that the monthly sentiment reading has exceeded 100. It is clearly the case that the pronounced ‘feel-bad’ factor that prevailed through the recent crisis has now faded. However, the details of the August survey also suggest that consumers remain relatively cautious in relation to their household finances and there are also hints that they may be a little more concerned about recent developments in various parts of the global economy.

We still remain some distance from a sentiment reading that might be interpreted as suggesting that a broadly based ‘feel-good’ factor has taken hold. Recurrent problems in various parts of the world economy may be playing some role in this but the main factor restraining the improvement in Irish consumer confidence at this point appears to be the lack of a widely felt boost to personal spending power. 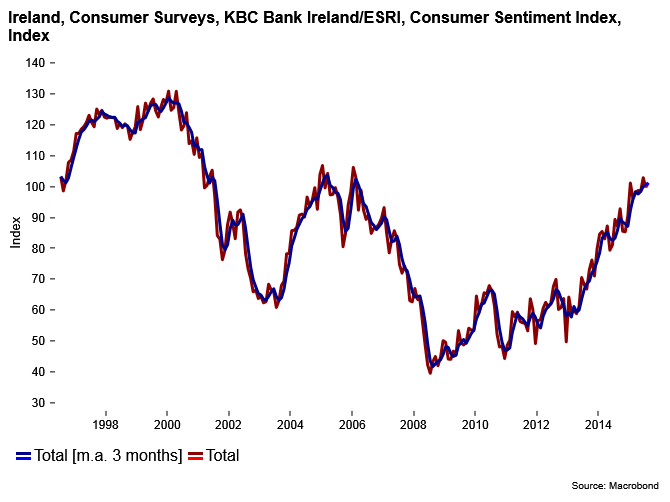 The KBC Bank/ESRI Consumer Sentiment Index increased to 101.1 in August from 99.7 in July. Last month’s increase reversed about half of the pullback seen in July following the nine year high of 102.8 reported in June. The underlying trend, as indicated by the three month moving average, also improved in August, to 101.2 from 100.3. As a result, this measure reached its highest level since February 2006. The positive trajectory of the sentiment index emphasises the broadening recovery in the Irish economy but relatively modest and somewhat random monthly changes in the index suggest that consumers aren’t sensing a dramatic improvement in their circumstances.

The details of the Irish sentiment survey were mixed in August with three of the five elements of the index rising and the remaining two falling month on month. Views on the twelve month economic outlook improved modestly. In view of very strong GDP data and buoyant exchequer returns released through the survey period, this might be regarded as a slightly disappointing outcome.

Continuing concerns about the outlook for the Greek economy coupled with increasing nervousness about developments in China may be prompting significant uncertainty about the health of the global economy. It should be emphasised that these concerns aren’t widely seen as threatening the current upturn; some 59% of respondents expect the Irish economy to strengthen in the next twelve months while just 11% expect weaker conditions to take hold. However, increased global uncertainty of late seems to be limiting the boost to confidence that might be expected from a range of very positive domestic economic indicators of late.
If the August survey was a little disappointing in relation to the economic outlook, it was even more so in relation to the outlook for the jobs market. It should be noted that positive response outnumbered negatives by a wide margin-47% of responses to 22%. However, as in July, this was slightly weaker than the previous month and it again occurred against a backdrop of a large number of new job announcements.

These results could be a statistical blip or they may reflect the absence of a follow-through from job gains to a widely felt rise in earnings that for most consumers would represent the clearest manifestation of an improving jobs market. However, these sentiment readings are broadly consistent with unemployment data for the past two months that hint at very least at a slight speed bump in the recovery in the Irish jobs market of late. So, this element of the survey bears watching in the months ahead.

As has been the case in recent months, the elements of the survey relating to household finances were mixed. The trend in household finances in the past twelve months was judged a little more favourably than in July but on balance consumers still report a weakening in their personal financial circumstances. In contrast, consumers were a little more cautious about the prospects for their spending power in the year ahead than in July but the balance of responses is still modestly positive.

Our sense is that consumers may be struggling to assess their personal financial prospects in circumstances where income growth is fairly modest and significant influences seem to be pulling in opposite directions. For example, notwithstanding a negative headline inflation rate, many Irish consumers are focussed on areas such as insurance, education and accommodation where substantial increases in living costs are being felt.

With summer sales ending and a range of seasonal spending commitments to be navigated, a fractional improvement in the buying climate in August should probably be regarded as a positive development and one that is consistent with a continuing trend improvement in consumer spending. Again, we would interpret the sentiment survey as pointing towards the persistence of a positive trend in consumer spending but also one that cautions against expectations of an ever accelerating trend in spending growth.