• Household finances under pressure because of property tax and future budget worries.

• Pressures on household finances likely to limit any improvement in consumer spending.

Irish consumer sentiment remained largely unchanged for a third month in April. The KBC Bank Ireland/ESRI Consumer Sentiment Index edged down to 58.9 last month from its March reading of 60.0. Changes as small as this are not indicative of any significant change in consumer thinking. So, it would appear that the mood of Irish consumers has altered little of late. They remain fairly cautious about the outlook for the economy as a whole and nervous about their own financial situation.

The details of the April survey suggest consumers became a little more concerned about Irish economic prospects and less inclined to make major purchases. So, the pattern of recent readings highlights the fragile position of Irish consumers in early 2013. The diagram below illustrates this point by comparing the monthly Consumer Sentiment Index with ‘smoother’ indicators of the underlying trend in the shape of three and twelve month moving averages of the survey data. These show there has been a gradual improvement in sentiment in the past couple of years but recently the three month average series has shown a somewhat poorer trajectory that contrasts with the progressive build-up in positive momentum that might be seen in a more ‘normal’ recovery. 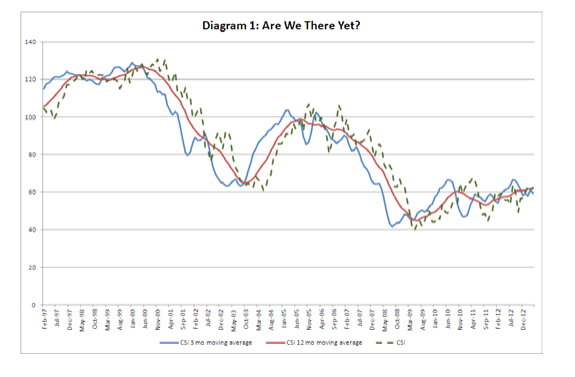 The slightly weaker Irish sentiment reading in April was broadly consistent with the modest decline reported in the comparable indicator for the US. The Consumer Sentiment Index compiled by the University of Michigan fell from 78.6 in March to 78.4 as consumers became a little more apprehensive about the outlook for the US economy. In contrast, Euro area consumer confidence improved marginally in April. However, results varied considerably across the countries that make up the single currency area. Consumers were a little more positive in ‘core’ countries such as Germany, France and Belgium and also a little less worried in Spain and Portugal. Only in one country was there was a dramatic monthly change. Not surprisingly, sentiment among Cypriot consumers weakened sharply (from -40.0 to -64.6, the lowest reading since 1990). It may be that the seemingly reduced prospect of burden sharing as well as notably different economic prospects contributed to divergent sentiment readings across Europe last month.

The slight deterioration in Irish consumer sentiment in April principally reflected a more downbeat view of the outlook for the Irish economy. This element of the survey has shown a modestly improving trend through the past couple of years but the monthly results have been fairly choppy around this trend, suggesting consumers remain fairly uncertain about the extent of progress being made by the Irish economy. In part, this reflects repeated flash-points in the Euro area crisis such as the mishandling of the bailout of Cyprus during the April survey period. We think this may have resonated more with Irish consumers than their Greek or Spanish counterparts because it serves to counter more encouraging aspects of the Irish narrative.

Although we feel that developments in Cyprus may have played some role in a poorer assessments of the economic outlook by Irish consumers in April, we think this was probably less important than a sequence of softer economic indicators at home and abroad and a number of downbeat commentaries on the outlook for the Irish economy including new assessmentsfrom the IMF and the Nevin Economic Research Institute as well as a slight downgrading of economic forecasts by the Central Bank. We should emphasise that the weakening in consumers’ expectations for the Irish economy was relatively modest last month but the drop highlights the fact that Irish consumers are not seeing a progressive sequence of month-on-month improvements in the economic news flow. As such, there is still a considerable degree of uncertainty among consumers as to whether the Irish economy is clearly set on a recovery path.

While we think the April results point to continuing caution on the part of consumers, a sense that their overall verdict on economic conditions didn’t change markedly in April is suggested by the coincidence of a slightly poorer reading on the economy and a slightly better reading on employment. This also indicates that consumers are willing and able to identify both positive and negative elements in the economic newsflow. In relation to the jobs market, developments through the survey period were broadly encouraging with a further decline in numbers on the live register and significantly more announcements of new jobs than of layoffs. While the month on month improvement in this element of the survey was modest, the April reading was one of the most positive in recent years, suggesting worries about job loss are slowly easing.

After a significant decline in March, consumers’ views as to how their household finances might develop in the year ahead weakened marginally further in April. In spite of an easing in inflation (to an annual rate of just 0.5% in March from 1.1% in February) consumers’ views on the next twelve months seem to have been more heavily influenced by concerns about the impact the new property tax and further budgetary tax and Public Spending measures may have on household incomes.

Unlike most other areas of the survey, this element has shown a clearly weakening trend through the past six or seven months. In the main, this seems to reflect the heightened impact of further budgetary adjustments on already strained household finances. In turn, the very stretched state of consumer finances mean that uncertainty in regard to further impositions can have an outsized impact on sentiment and spending power. This would argue that ‘kite flying’ in relation to next October’s Budget limited if further weakness in consumer spending is to be minimised.

Ongoing pressures on household spending also meant that the somewhat surprising improvement in the buying climate seen in March was partly reversed in April. As noted previously, this is a particularly volatile element of the survey even if the broad trend has been relatively flat for the past couple of years. The absence of a clear trend in either direction in this element suggests the influence of heavy price discounting and lower interest rates was largely offset by increased pressures on household incomes.

In summary, the April sentiment reading emphasises the fragile nature of Irish consumer sentiment at present. This largely reflects two influences. The first is the absence of a clear progressive improvement in Irish economic conditions that would establish beyond doubt that a recovery is taking hold. The second and arguably more important ‘weight’ on sentiment is the poor position of household finances and the prospect that budget pressure on consumer spending power will persist for at least for another year or two. Until these circumstances begin to change for the better, a strongly improving trend in consumer spending is unlikely to take hold.