It is probably best to begin a discussion of today’s new Irish macro data by again cautioning that the Irish GDP ‘map’ is at very best a limited guide to the economic ‘territory’.  In reality, the terrain varies widely and the added complication of a post-pandemic landscape significantly increases the sense of uncharted territory.

In plainer English, this means very wide margins of error must attach to Irish economic forecasts at present and great care must be taken in using the related summary figures to describe the conditions facing most firms and households.

Acknowledging these caveats, revised data released today show markedly stronger Irish GDP growth in 2020, now put at  +5.9% against a preliminary estimate of 3.4%. The drivers of this revision also suggest scope for a notably more rapid increase in 2021. Reflecting these revisions (and the early 2021 strength signalled by today’s revised Q1 release), we have amended our previous forecast for Irish GDP growth for 2021 from +5% to 10%.

This upgrade is exclusively focussed on a buoyant multinational sector and the expected persistence of exceptionally strong net exports. The concentration of multinational activity in areas such as Pharma and ICT why, unlike most other economies, the pandemic boosted rather battered aggregate Irish GDP in 2020 as diagram 1 illustrates.

Indeed, Ireland is virtually unique among advanced economies, both in registering positive GDP in 2020 , in registering a stronger outturn than in 2019 (+4.9%). 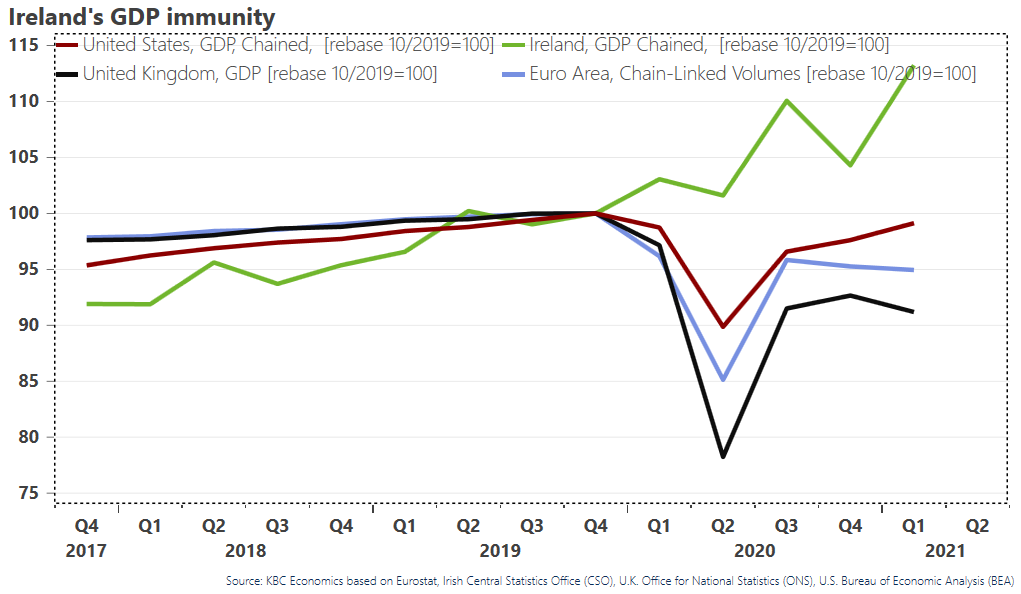 At the same time, the new data reveal continuing and somewhat greater than previously estimated weakness in most domestic facing sectors, with modest downward revisions to previous estimates for 2020 for consumer spending (down 10.4% v 9.0% previously),  and construction of new dwellings (down 3.6% v 2.3% previously).

In this context, Ireland is something of an outlier on the side of weakness rather than strength as the diagram below illustrates. We would also highlight the particular strength of the US of late which was notably underpinned by aggressive fiscal measures over the turn of the year. 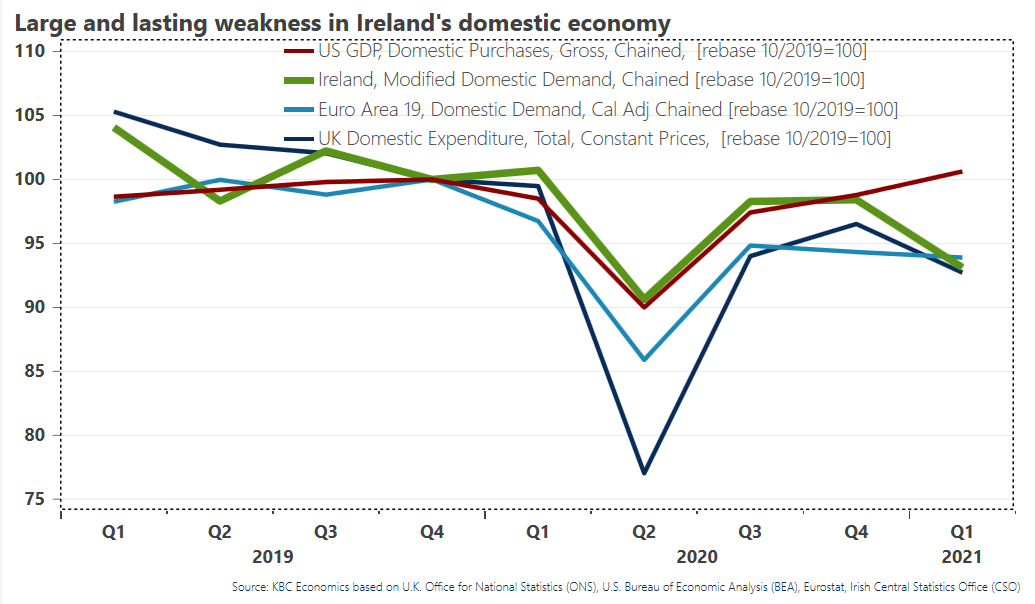 Today’s revised data for the first quarter of 2021 show a continuing divergence between the multinational sector where activity was 13.6% higher than a year earlier and other parts of the economy where the level of activity was 1.2% lower.

As a result, early 2021 saw Irish GDP register a quarterly rise of 8.6% (upwardly revised from 7.8%), making it an outlier in the Euro area where GDP declined 0.3%. However, consumer spending fell a larger than initially estimated 5.9% (previously 5.1%), a notably poorer performance than the Euro area average decline of 2.3%. In the same vein, construction spend in Ireland was down 16.7% in the first quarter (compared to a 14.1% preliminary estimate).

We continue to expect a substantial rebound in domestic spending through the remainder of the year but that will still leave a substantial shortfall compared to the pre-pandemic level and associated downside risks to employment.

Given current global circumstances, where the pandemic has taken a deep toll on economies and policy worldwide is focussed on rebooting activity rather than reducing support, Irish economic problems related to unemployment and infrastructure are more pressing than the position of the public finances.

For this reason, we think the recently released Summer Economic Statement sets out a necessary and reasonable balancing act between restoring domestic activity and employment to a healthier path and returning the public finances to a sustainable trajectory.

We would also re-iterate that the buoyancy of the multinational sector significantly improves available ‘fiscal space’ both cosmetically by boosting headline Irish GDP which is the denominator used for EU fiscal metrics and, more fundamentally, by boosting tax revenues. While current circumstance argue forcefully for the use of that fiscal space, even more important is the need to ensure it is used  productively.