Today’s employment data for the final three months of 2011 were slightly better than expected and hint at a tentative stabilisation in the Irish jobs market.  It remains the case that the jobs market is weak and that unemployment is extremely high.  This also means that long term unemployment is continuing to rise.  However, today’s data suggest that job gains are running at broadly similar levels to job losses at present which marks a significant improvement relative to the experience of 2009 and 2010 as diagram 1 clearly shows. 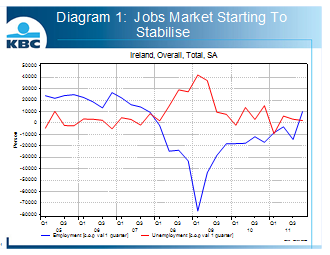 Signs of a stabilisation in Ireland’s jobs market remain patchy but the two key elements of the 4th quarter data released today that point in that direction are (1) the final three months of 2011 saw the first quarter on quarter increase in seasonally adjusted employment since late 2007 and (2) the year on year decline in numbers at work was the lowest since the second quarter of 2008.  Furthermore, between the final quarters of 2010 and 2011, numbers at work in the private sector rose marginally (from 1.122 mio to 1.131 mio) while the drop in employment was concentrated in the public sector (down from 402K to 392K).  Within the private sector, the number of employees rose slightly while there was a fall in the number of self employed (from 297K to 286K).  The latter contrasts with the trend seen at the beginning of the downturn and may reflect the difficulties that many of those laid off have had in their efforts to build sustainable businesses in very weak domestic economic conditions.

In contrast to the trend of recent years, the final quarter of 2011 also saw a slight annual increase in the number of non Irish nationals at work.  This may hint at slightly better conditions in sectors such as food production and restaurants/hotels as well as some limited incidence of labour shortages in particular areas.  Limited sample sizes mean we shouldn’t over interpret these results.

Numbers at work in the Irish economy in the final three months of 2011 increased marginally, by 10K or 0.6% compared to the previous quarter.  In reality, this should be regarded as an unchanged number.  As Diagram 1 across shows, the fractional increase in the 4th quarter partly corrects for a slightly poorer 3rd quarter outturn and suggests that a broad balance is emerging between jobs being created and jobs being lost.  The sectoral details suggest this is probably happening through an easing in layoffs rather than a dramatic increase in new jobs created.  This is hinted at in the broad stability in numbers at work in recent quarters in most areas and particularly in construction, industry and retailing that saw the largest employment declines through the downturn.  There was an improvement in employment in industry in the final three months of 2011 that probably reflects stronger output in areas such as food production as well as in a number of multinational activities.  There was also a modest increase in employment in hotels and restaurants, a development that may reflect competitiveness gains in that area of late.  Finally, the broad financial sector also posted job gains in late 2011 that likely reflect the international aspects of these activities.

The next couple of quarters are likely to see employment conditions remain weak across the Irish economy.  In addition to the adverse impact of jobs of sharply increased global uncertainty and another ‘austerity’ budget, redundancies in the public sector and in banking are set to amount to around 10K jobs in gross terms.  These are likely to be seen in jobs data for the first and second quarters of 2012.  That said, the tentative evidence of a stabilisation in Ireland’s jobs market in today’s 4th quarter data for 2011 hints that the overall drop in numbers at work for 2012 as a whole may be relatively limited and could be in the region of 10K – a somewhat smaller decline than we previously envisaged.

Today’s release also contains some revisions to estimates of the monthly seasonally adjusted unemployment rate through 2011 and the early months of 2012.  These revisions imply the average unemployment rate for last year was somewhat higher at 14.4% than the previous estimate of 14.2%.  The new data also show a slightly poorer intra-year trend through 2011.  The likelihood is that the unemployment rate will remain in the region of 14.5% through 2012 although a key uncertainty relates to the extent which those made redundant from the Public Sector and Banking are re-employed or leave the labour force.

While there are some slightly encouraging signs in today’s data there is also evidence of the extent of strains within Ireland’s jobs market in recent years.  Nowhere is this clearer than in the continuing climb in the share of long term unemployment (those unemployed for over 12 months) as a proportion of total unemployment.  As Diagram 2 below indicates, the broadly based weakness of activity in recent years and particularly poor conditions in the construction sector means the probability of returning to employment has declined and long-term unemployment has climbed disproportionately.

In addition to the increase in long term unemployment, workers have exited the jobs market thereby reducing the participation ratio (see Diagram 2) or opted for emigration.  In that context, today’s data suggest that the number of adult Irish nationals has remained broadly stable in the past twelve months.  (The data show a 0.3% decline but this isn’t statistically significant).  This contrasts with modest increases in this aggregate in previous releases and hints at some increased incidence of emigration of late although these data don’t point towards a dramatic change in trend.  A clearer understanding of the scale of recent migration flows will only come with the integration of 2011 census data into these job figures and the annual population estimates in the months ahead. 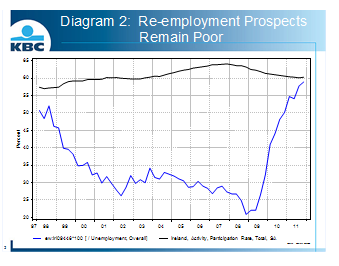