November saw a sharp rise in Irish retail sales in response to heavy price discounting in ‘Black Friday’/’Cyber Monday’ promotions by retailers. As the graph below indicates, underlying retail sales (excluding motor trades and bars) posted a volume gain of 3.6% m/m--both its largest one month volume gain and its largest one month price decline on record in November. Overall monthly retail sales rose by 0.9% m/m but this figure was depressed by soft car sales. 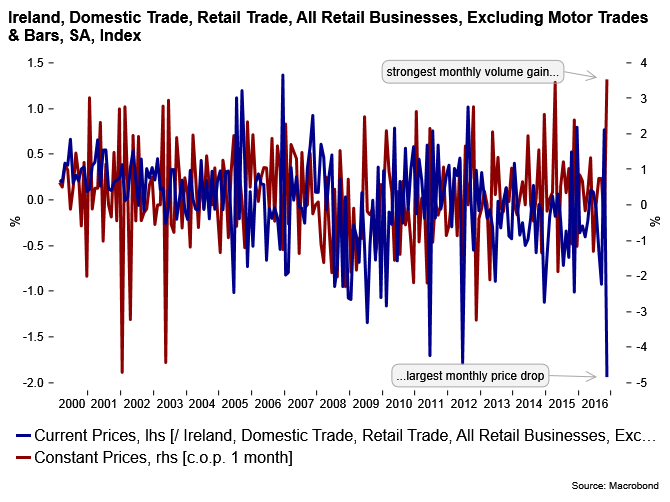 The November data also hint that some domestic retailers responded aggressively to increased competitive pressures posed by Sterling weakness by cutting their prices. As the monthly pick-up in sales volumes more than compensated for the drop in prices, this strategy seems to have been successful, at least initially. Of course, the November sales jump may reflect spending brought forward from December. The particular buoyancy of sales of electrical goods (+17% m/m) and pharmaceuticals and cosmetics (+7.9% m/m) and even clothing (+2.2%) likely reflect Christmas related spending. So, it will take another couple of months’ data to properly assess the health of Irish retailing at end 2016.

The pick-up in sales volumes in November seems to point towards a notably increased price sensitivity on the part of Irish consumers. This sensitivity may provide at least part of the explanation for lacklustre VAT receipts through 2016. The particularly negative impact that price cuts have on VAT receipts would also be consistent with a somewhat healthier outturn for excise receipts which relate to the volume rather than the value of spending.

The November retail data are consistent with the view that Irish consumers are cautious in their spending behaviour but there is an important counterweight in that their purchasing power is supported by favourable trends in employment and some improvement in earnings. This suggests that uneven but still solid gains in consumer spending overall might be envisaged for 2017. The latest KBC Bank Ireland forecasts estimate that consumer spending will grow by 3.0% in volume.

More fundamentally, November retail sales numbers seem to highlight a ‘new normal’ in which Irish consumer spending patterns are increasingly influenced by a combination of aggressive pricing and heavily promoted events of which ‘Black Friday’ is a particularly prominent example. The associated concentration of spending with a notable tendency towards localised peaks and troughs makes it much harder to assess the underlying trend in consumer spending.