Irish GDP data remain a significantly compromised indicator of the economic conditions facing most Irish-based businesses and households. However, the broad message of preliminary GDP numbers—that show GDP increased by 9.0% y/y in Q2 2018— is consistent with a range of other data and points towards an Irish economy that is performing solidly and where an improvement even if uneven in pace is being more broadly felt. Significant increases in consumer spending and construction in Q2 are important developments in this regard. The reported rise in GDP y/y is notably stronger than the EU average or than the pace that might be inferred from the pace of Irish jobs growth as diagram 1 below suggests. 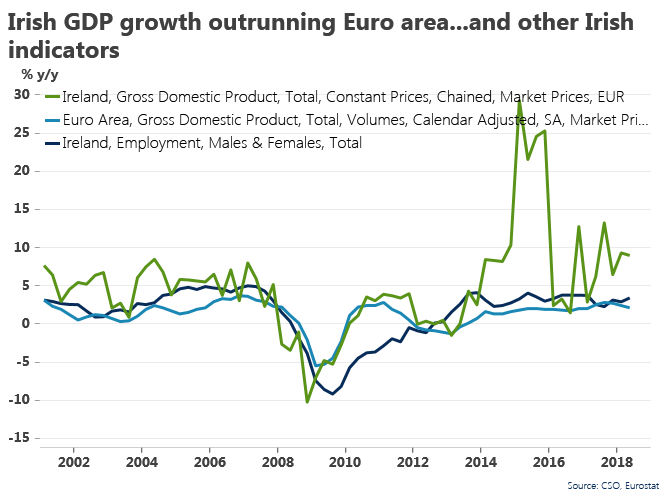 The reported quarterly change in GDP remains extremely erratic with a 2.5% increase in the second quarter representing the fastest increase in the EU while the first quarter drop of 0.4% (previously estimated at -0.6%) was the poorest outturn among EU 28 countries. These large swings contrast with the evidence of other indicators that point towards a steadier and strong but somewhat slower momentum in Irish economic activity.

The recorded improvement in domestic spending in today’s GDP release numbers as well as the particular strength of multinational activity mean we are raising our forecast of GDP growth for 2018 as a whole from 6% to 7%. Either outturn would mean that Ireland seems set to be the fastest growing economy in the EU for the fourth year in five.

Of course, this measured growth rate is materially boosted by the exceptional activities of a small number of multinationals based in Ireland. The transfer of substantial amounts of intellectual property to Ireland in recent years means that the share of their activity attributed to the Irish economy has increased markedly. In the absence of an acceleration in this process, this impact on the recorded growth rate should fade but for 2018 this factor looks to be more influential than we previously thought.

Importantly, the underlying picture as evidenced by employment data in particular as well as a range of surveys and other indicators, is one of an Irish economy delivering meaningful gains in activity and aggregate incomes, in large part because of significant increases in numbers working and living in Ireland. Drawing on these indicators, we estimate the underlying growth rate for Ireland for 2018 is in the region of 4.5-5.0%.

Some notable features of the Q2 data are:

Overall, today’s GDP data, for all the many caveats, appear consistent with an Irish economy that is performing well and growing solidly.  A notably encouraging feature is the pick-up in areas of domestic spending such as consumer spending and construction. 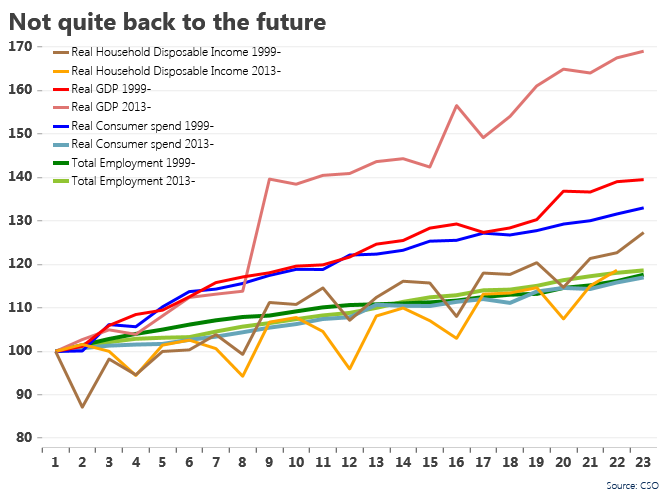 As the diagram above suggests, headline GDP data clearly proclaim the boom is back – Q2 2018 GDP is 56.6% higher than the pre-crisis peak. However, other indicators suggest recovery still has some distance to travel as numbers at work are just 1.6% higher, real spending power per household is till about 4% lower and while aggregate household wealth is marginally higher, population growth of around 11% means average wealth is still significantly down from the previous peak.