Brexit –related uncertainty could make for bumpy start to 2019

No direct or mechanical link between Irish and UK property price trends but broader economic ties important. So, nature of Brexit critical.

Irish residential property data for October show a slight easing in the rate of house price inflation to 8.4% from an upwardly revised 8.5% for September (previously estimated at 8.2%). The year-on-year increase in October is the lowest in two years (October 2016 +7.5%).

However, the broad message from these data,  expressed in the modest easing in the annual rate in recent months, in positive if small monthly changes in October and in the upward revision to the September data, is that an orderly ‘normalisation’ to a more sustainable pace of house price inflation has become established of late.

A strong Irish economy and a shortfall in housing supply continue to underpin Irish property values but a range of factors are now acting to slow the pace of growth in Irish house prices, most notably a narrowing gap between new supply and demand because of significantly increased home-building and affordability constraints.
These influences might be expected to cause a further moderation in Irish house price inflation into 2019. In such circumstances, average property price inflation next year might be expected to emerge at about half the 10% pace of increase now likely in 2018.

Such expectations assume slower but still solid gains in activity and employment in the Irish economy in the coming year. A further significant influence is stability in lending limits in the wake of the recent Central Bank of Ireland review of its mortgage measures. Unfortunately, the path to sustainable trajectories in house prices and transactions could get a good deal bumpier before long.

In the near term, there is an increasing risk that these ‘fundamental’ drivers might be overwhelmed by Brexit related nervousness. Increased uncertainty about the outlook for the Irish economy has already translated into a notably more cautious tone in consumer and business sentiment surveys of late. To the extent that this uncertainty translates into some postponement of spending, it would weigh on Irish property transactions and price trends in coming months.

The problem for Irish homebuyers and for consumers and businesses more generally is the degree of uncertainty about Brexit, the proximity of key decision dates and the large difference in the scale of economic damage envisaged under alternative outcomes.

In such circumstances, postponing major commitments until the outlook becomes a little clearer may become attractive for some (although, as the experience since the UK referendum result in 2016 has shown, the basic nature of the demand for housing means this is unlikely to be pervasive or long lasting).

However, as seasonal influences usually prompt a softer trend in monthly price changes between the autumn and spring ‘buying seasons’, Brexit effects could be quite influential around the turn of the year.

Problems in the neighbourhood

Beyond such near term uncertainty related impacts, it is self-evident that Irish economic conditions and the residential property market would look altogether different under a ‘soft Brexit’ encompassing a transition period and a reasonably close future economic relationship with the UK than those threatened by a ‘no deal’ Brexit in which the UK crashes out of the EU without significant safeguards in just three months’ time.

As we previously noted, assessing the short term impact of a ‘crash out’ Brexit, is extremely speculative. Our sense is that with offsetting policy actions at national and EU level, Irish growth in 2019 might be marginally positive. The Bank of England recently produced analysis suggesting that in a ‘disorderly’ Brexit scenario UK house prices could be reduced by as much as 30%. While this should be seen as a worst case scenario rather than a plausible forecast, it may be useful to consider the nature of the link between house price trends on either side of the Irish Sea.

It would be expected that because of strong economic links between the UK and Ireland there would be a positive relationship between house price movements in the two countries. A comparison of house price increases (from Bank of International Settlements data) back to 1972 shows a weak positive correlation between changes in UK and Irish house prices of about 0.35 but this relationship appears to have broken down since the UK referendum in 2016.

The diagram below suggests that property price trends in the two economies can show marked divergences for significant periods.  In part, this is due to differences in ‘macro conditions but it also reflects specific property related factors such as demographics, the role of macro-prudential regulations and the international character of the London property market. 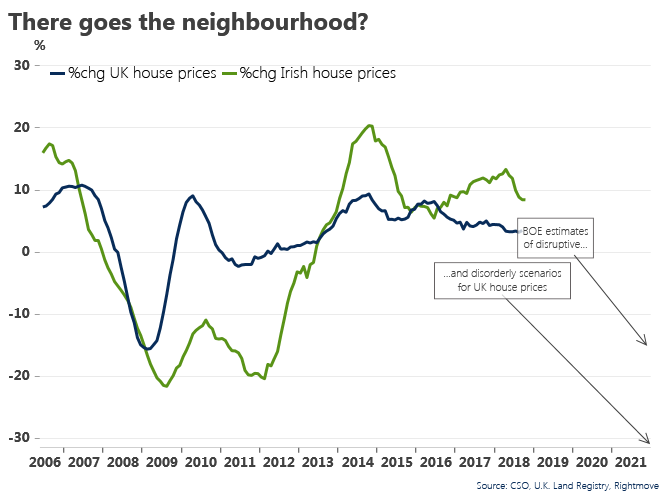 Moreover, when we included UK house prices as an explanatory variable in a single equation model of Irish house prices, the coefficient wasn’t statistically significant suggesting any correlation doesn’t imply a causal link between UK and Irish house prices.

These exercises suggest that while Brexit is likely to weigh on the Irish housing market, there is unlikely to be a simple mechanical read-through from UK house price developments to their Irish counterparts. The key linkage is through the broader economic fall-out for Ireland from UK economic weakness.

In the near term, uncertainty related effects may dominate through some postponement of purchases. As next year progresses, the more fundamental path for the Irish economy determined by the nature of Brexit that emerges will determine whether Irish property prices see a Brexit bump or bounce.