Property price data for November suggests the recovery in the housing market is spreading and strengthening.

House price inflation picks up to 8.6%- fastest pace since June 2015

Strongest growth now been seen outside capital as upturn broadens

Catch-up rather than commuters seems to explain acceleration 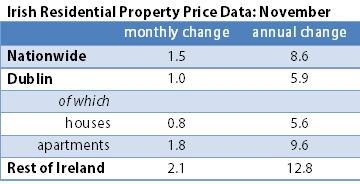 Irish residential property price data for November suggest the recovery in the housing market is spreading and strengthening. The November data more than reverse the slight easing in house price inflation seen in October (for which the annual increase is now put at 6.9% rather than the previous estimate of 7.1%). As a result, Irish residential property prices showed a year on year price gain of 8.6% in November, the fastest pace of increase since June 2015.

A month ago we argued that the evidence of slowdown in housing inflation in October shouldn’t be overemphasised. We also think it would be unwise to extrapolate the November figures too far. That said, there are two notable aspects of the property price numbers for November that seem worthy of comment.

In terms of key segments, such as the Dublin market, housing demand continues to outpace a still limited pick-up in supply by a considerable margin. As a result, momentum in residential property prices in the capital remains solid. However, perhaps the most significant feature of the November data is strong monthly gains in prices outside the capital (and in Dublin apartment prices) that hint at a broadening of the property upswing. 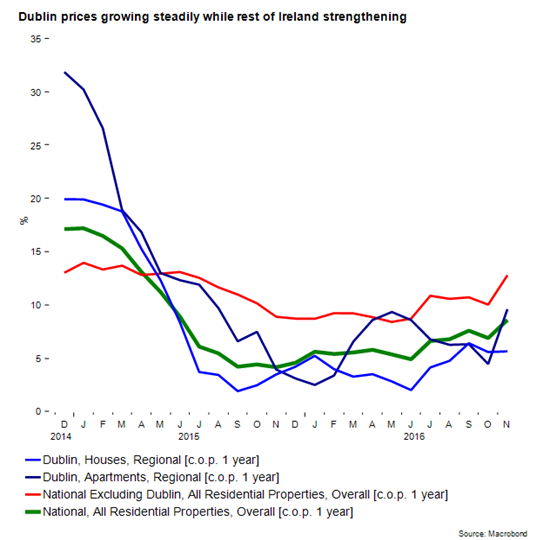 The strongest annual rise in prices regionally of late is being recorded in areas such as the west (+16.7%), the mid-west (+14.9%) and the south east (+14.5%). These areas are among the weakest performing in terms of cumulative price trends since 2010, the period for which regional indices are available. This ‘catch-up’ may reflect some broadening of the recovery and/or some re-pricing of regional price differentials.

It should be noted that this tendency towards strengthening price trends is not universal- prices in border areas have underperformed of late, a trend that won’t be helped by Brexit concerns. The geographic dispersion of areas with relatively rapid price increases in the past year also suggests this development is not simply a spill-over effect of higher Dublin prices to nearby ‘commuting’ counties.

At the margin, the pick-up in prices in November might also reflect the anticipation of some support for prices from the Government’s ‘help to buy’ scheme. Although this was only formally unveiled in Budget 2017 and relates only to purchases of new builds by first time buyers, at the margin, it could already have had some positive impact on prices in some areas. 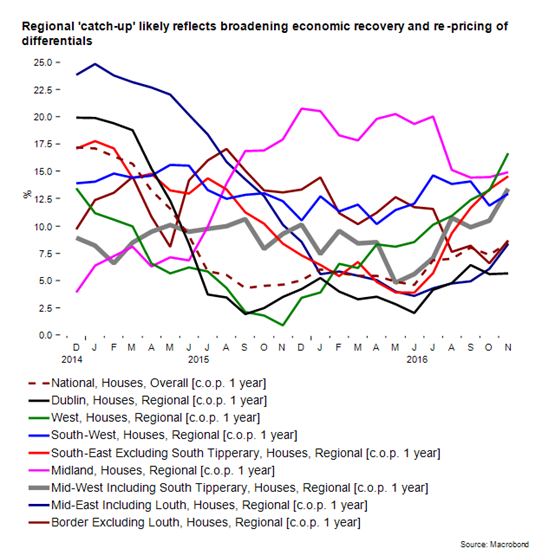 Filings data also included with today’s release show housing sales volumes in November were 12.2% higher than a year earlier. While we would be reluctant to overemphasise one month’s results given the volatility of these data, nonetheless it is notable that the November sales increase is made up of a 27.8% increase in first-time buyers and a 6.3% increase in ’movers’, a breakdown that emphasises the emergence of pent-up demand for housing. Also notable is that new dwellings accounted for just 307 of 3,642 household purchases filed in November.

For 2017 new supply is likely to again fall short of prospective demand which suggests Irish property prices could continue on an upward path. Aside from affordability, the key determinant of the strength of property prices in the coming year may well be which of two sets of opposing factors has the greatest impact on market sentiment.

‘Macro’ concerns such as ‘Brexit’ and potentially adverse effects on Ireland of economic and tax policy changes in the US could weigh on Irish property prices but the precise form and scale of the threat posed by these developments to the Irish economy and, by extension, the property market remains quite unclear at present.  In the absence of clear signs of any significant fallout in areas such as jobs, the effect of these risks to the economic outlook may be to modestly constrain the growth in property prices in the coming year.

Acting notably in the opposite direction will be two domestic policy initiatives in the shape of the Government’s ‘help to buy’ scheme set out in the Budget in October and the slight easing in the Central Bank’s ‘loan to value’ limits announced in November. Again, the ‘announcement’ effect of these measures on market sentiment may be greater than their mechanical impact on aggregate purchasing power but the incremental effect of such measures on demand in a market currently characterised by inadequate supply shouldn’t be underestimated.

Reflecting our assessment that the Irish economy should register solid but not spectacular gains in incomes, employment and immigration in 2017, demand for housing should remain robust. Our current judgement is that increased supply, affordability constraints and some heightened ‘macro’ uncertainty will act to constrain but not counter price growth in the next twelve months.

The strength of Irish residential property prices in recent months implies very favourable ‘carry-over’ effects that mean that even if prices don’t change much through the coming year, the average increase for 2017 would not be much below the likely 2016 outturn of about 6.5%. We expect prices to increase further through the coming year at a pace that could produce an end 2017 outturn in the region of 5%, a clear but still contained moderation from the current 8.6% rate of increase.