November residential property prices up 0.2%y/y, first rise since May

Irish residential property price inflation returned to positive territory in November for the first time since May-albeit the y/y increase of 0.2% is marginal. These data lend further substance to the view that the Irish housing market has seen little slippage in the wake of the pandemic and may have been underpinned in certain respects.

Probably the most notable feature of the November house price data release was the first positive year-on-year change in transactions since March. As the diagram below illustrates, market purchases by households collapsed as the pandemic struck, registering a 46% Y/Y drop in May. Since September there has been a progressive improvement to the point where preliminary November data show market transactions (by household purchasers) were 6% higher than a year earlier. The turnaround has been broadly based, albeit marginally more pronounced for first-time buyers (from -48% in May to +6% in November) than for movers (from –44% to +5%). 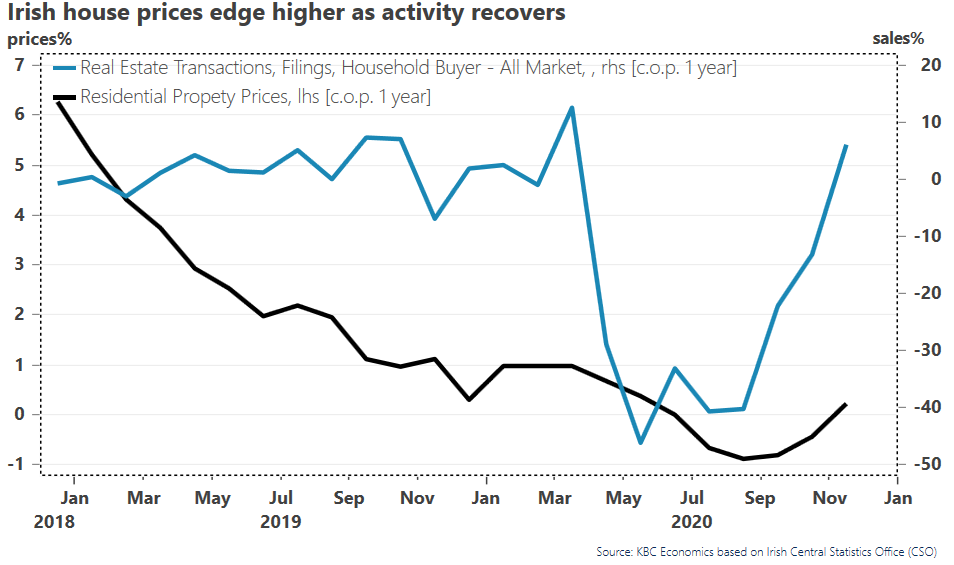 As has been the case for some time, the trend in Dublin property prices remains weaker than elsewhere in the country. However, the y/y drop in prices in the capital in November (-0.9%) was modestly less than in October (-1.3%). That said, the improvement outside Dublin was more marked with prices rising +1.2% y/y in November compared to 0.3% in October.

In the same vein, the improvement in transactions was concentrated outside Dublin with sales up 13% y/y compare to a 10% fall in October. In Dublin the trend in transactions also improved markedly from the October out-turn (-20%y/y) but remained materially lower than a year earlier (-10% y/y) in November. So, differences in affordability and availability are translating into different degrees of momentum in different parts of the Irish property market at present.

In part, the better than feared trend in Irish housing prices and the rebound in transactions reflect the broader resilience of the Irish economy across a range of indicators. It also reflects the importance of a persistent housing demand supply imbalance that may be worsened in the short term.

There is little question too that increased time spent at home has underlined the requirement for housing that better suited their needs for many, adding a further layer of prospective purchasers to current demand.

Finally, the performance of Irish house prices likely owes something to the ‘cushioning’ provided by unprecedented domestic policy support measures that avoided any significant threat of ‘fire-sales’ and underpinned home-buyer sentiment.