What has been announced today?

The Central Statistics Office has today announced plans to produce a new measure of Irish economic growth in an effort to overcome problems highlighted by the 26.3% rate of GDP growth recorded for 2015.

It should be emphasised that this new measure is intended to supplement rather than replace GDP, which is the long established international yardstick for measuring a country’s aggregate economic activity. Similarly, as we indicated in previous analysis, the current approach of the CSO and the 26.3% GDP growth calculation for 2015 both reflect best international practice.

What is the problem?

The problem is the nature and scale of multinational companies based in Ireland is such that their activities, which are frequently out of step with developments in the rest of the Irish economy, can throw up GDP numbers that are not representative of the experience of most Irish households and firms. This is not an issue that is unique to Ireland but the extent of multinational activities in Ireland means the impact is exceptional in degree.  Importantly, it does not mean that the current approach is wrong in any sense.

What is the proposed new measure?

A review group chaired by the Governor of the Central Bank has recommended that, in addition to providing more disaggregated detail  on a regular basis that separates the activities of  the multinational sector from the rest of the economy, a new measure GNI* should be produced as a barometer of Irish economic activity.

Essentially, this new measure entails taking additional steps to exclude a broader range of flows related to the activity of the multinational sector in Ireland that don’t translate into incomes for domestic residents. The two main elements highlighted in the new approach concern elements that are quite technical but have caused difficulties in recent years. These are (I) profits earned but not distributed to overseas shareholders (owners) of companies based in Ireland and(II) the depreciation of foreign-owned domestic capital. A sense of how these elements fit into the national accounts measure may be gleaned from the table presented in the appendix at the end of this report.

What difference will it make?

The new metric will not replace GDP as the main focus of analysis on the Irish economy. We can’t be sure what difference the new measure will make to thinking on Irish economic trends. The CSO indicated today its intention to begin work on the new growth measure and related additional breakdowns of ‘multinational’ and ‘domestic’ indicators. We won’t have the first official estimate of the new number until the summer.

The diagram below gives some rough estimates we have made of the new measure and how it compares to GDP and GNP. As can be seen, it is quite similar to GNP historically but the two series have diverged in recent years. At current levels, the use of GNI* as the denominator for fiscal ratios makes little difference in terms of the Government deficit boosting it to around 1% from our estimate of 0.7% of GDP for 2016.  However, the debt to GNI* ratio climbs to about 110% compared to an estimated end 2016 ratio of about  78% of GDP, implying more significant long term fiscal sustainability concerns than current conventional measure would suggest. 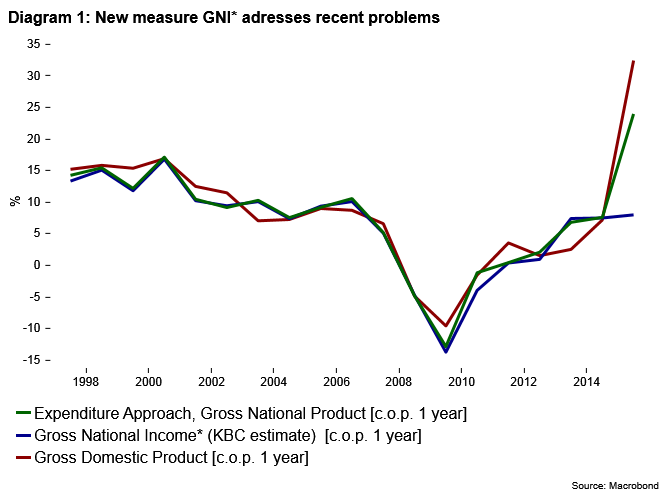 Does it make sense?

There is little question that the new measure GNI* should provide a better indication of the underlying trend in the Irish economy through the past couple of years. However, it tends to focus on a particular if important issue rather than the broader complexities of measuring the Irish economy. There is no ‘magic number ‘that can be guaranteed to capture the changing structure of the Irish economy on a consistent basis.

As we enter into a period where Brexit, the Trump presidency and changes in the global tax environment hold the potential for significant shifts of companies into and out of countries, it is helpful that there is increased focus on the role of the multinational sector but we need to be careful not to place too much reliance on an alternative summary measure. It is impossible to future proof economic statistics to possibly sharp changes in economic structures in coming years.