Irish Government investment low on a range of comparisons…

In most tellings of the Irish economy version, unlike the original Goldilocks tale, only two possibilities are considered; one in which fiscal policy is too loose and the other in which it is just right. Like the popular fairy tale, this story likely reflects fears borne of previous dangerous encounters but, in reality, history suggests that Irish fiscal policy has been damagingly too tight as well as too lax in the past.

Alongside a large fiscal deficit at present, the Irish economy also faces large and likely persistent deficits in economic and social infrastructure as well as the emerging risk of a significant post-pandemic scarring in the jobs market. The task now emerging is to frame a balanced policy approach in coming years that ensures the public finances remain on a sustainable trajectory but pays at least equal attention to major difficulties in other key economic metrics-difficulties that ultimately weigh on the public finances.

Many pointers to positive fiscal path

In contrast to these other problem areas, the reality is that the direction of travel for the Irish public finances is already fairly clear. In coming years, the large deficits experienced in 2020 and expected in 2021 will naturally give way progressively to materially smaller gaps. Just as the advent of the pandemic prompted an entirely appropriate supportive fiscal stance, its end will see an unwinding of such measures. In addition, the expected return in 2023 to what should be a more nuanced version of EU fiscal rules should further underpin a trajectory towards improving public finances in Ireland and elsewhere.

While it remains to be seen is how straight and speedy the path towards fiscal balance may be, as diagram 1 below indicates, EU Commission estimates suggest that the scale of  the pandemic-related deterioration in Ireland’s public finances broadly mirrored that of the Euro area average but point towards a stabilisation in the underlying deficit in 2021 and a clear improvement in 2022 that suggest the Irish position is emerging somewhat better than its peer group. For what it’s worth, IMF forecasts out to 2026 envisage a lasting and larger than average improvement in the Irish fiscal position out to that point. Being on the right side of the pack in this regard represents an important contrast to Ireland’s outlier status during the previous crisis. 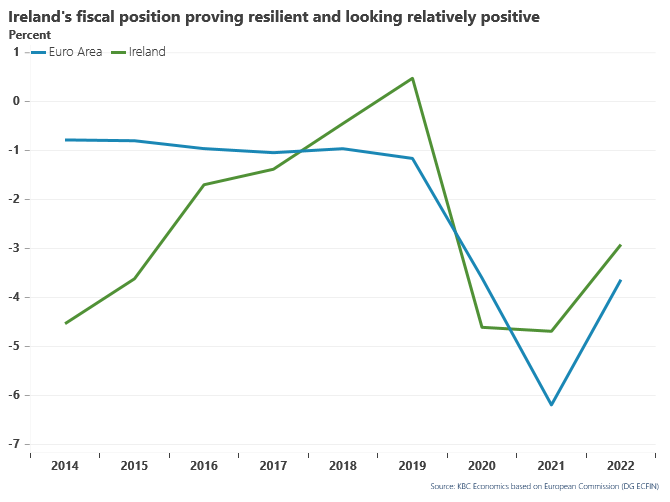 These relatively positive assessments of the Irish fiscal outlook significantly reflect the resilience of the Irish budgetary position since the pandemic first struck. As the better than profile tax revenues and lower than profile public spending in 2020 and again for the first six months of 2021 suggest, unlike the case in 2008/9 the pandemic has not revealed a previously unexposed structural weakness in the Irish public finances.

Although there has been a pronounced weakening in employment, this was  concentrated in lower paying jobs. As the income tax system is very progressive, this meant receipts remained robust. Overall, tax revenues fell by some €2bn in 2020 against an initially projected decline of €10bn while voted spending was €2bn less than initially envisaged. For the first six months of 2021, tax revenues are almost €1.5bn ahead of projections and voted spending some €1.7bn below profile. There is little to suggest any divergence from this path in the next year or two.

As diagram 2 indicates the current trajectory of the public finances is unlike the crisis of a decade earlier because tax revenues have remained resilient and a large increase in public spending has been concentrated in Covid-related health outlays. 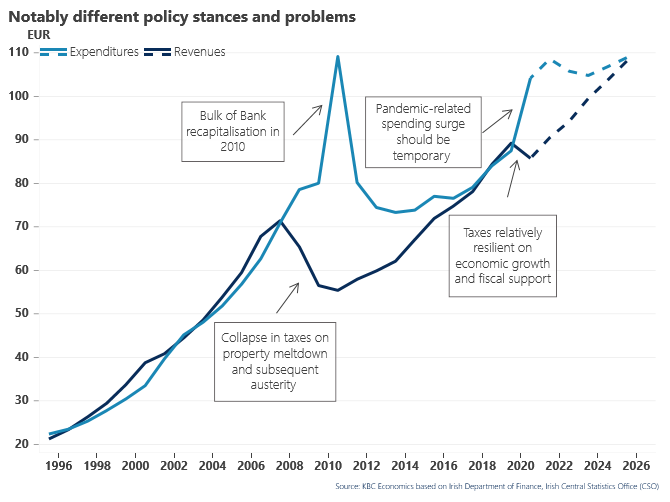 While the inherent volatility in Irish economic metrics argues the need for some element of Irish outperformance in relation to the public finances,  there are significant opportunity costs of excessive frugality at present. These costs are notably greater in current circumstances -diametrically opposite to those prevailing in the previous crisis- where the ECB ‘s recent strategic review suggests significant ‘monetary space’ reflecting both a slightly higher inflation target and the adoption of Asset Purchase Programmes as a normal part of its operational toolkit which, in turn, implies that the Governments debt financing burden will not deteriorate markedly for some significant time.

If fiscal problems appear manageable, other difficulties may be more material and immediate. While there is much media discussion of the prospect of a looming consumer boom, even the more optimistic of the range of current forecasts suggest that it will take a couple of years to make good the 9% drop in household spending in 2020 and possibly a good deal longer to restore consumer spending to its pre-pandemic trajectory.

Instead, increased uncertainty about future income growth, elevated unemployment and the impact of higher inflation on spending power could all produce a weaker trend growth in post-pandemic consumer spending once the initial ’opening-up’ bounce is completed.

As the diagram below using KBC Bank forecasts for consumer spending illustrates, the ‘consumer spending catch-up’ may yet fall short of previous losses. Moreover, there is a strong case for significant support- Irish consumer spending in the first quarter of 2021 was 11.4% lower than a year earlier, more than twice the decline across the Euro area as a whole which was 5.4%. 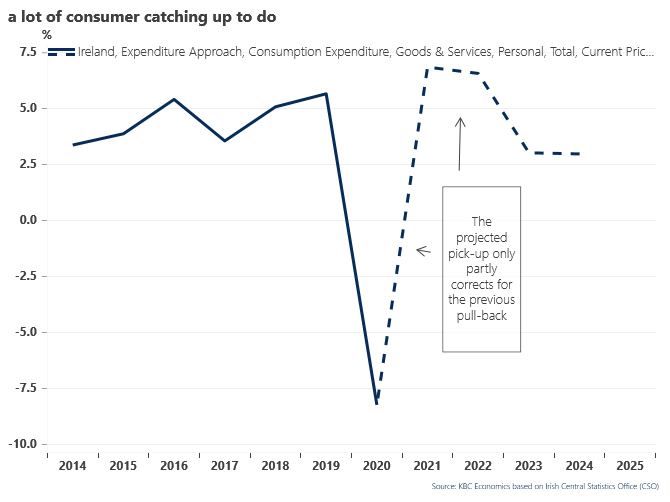 Although Ireland’s pandemic fiscal path bears favourable comparison with other economies, the weakness in domestic spending has also translated into a markedly poorer relative performance in terms of employment and unemployment. The diagram below shows the Irish jobs market has been hit far harder than many others with numbers at work in the first quarter of 2021 down 5% compared to the first quarter of 2020 (which saw job gains in Ireland in contrast to elsewhere reflecting the pre-pandemic strength of the labour market here). 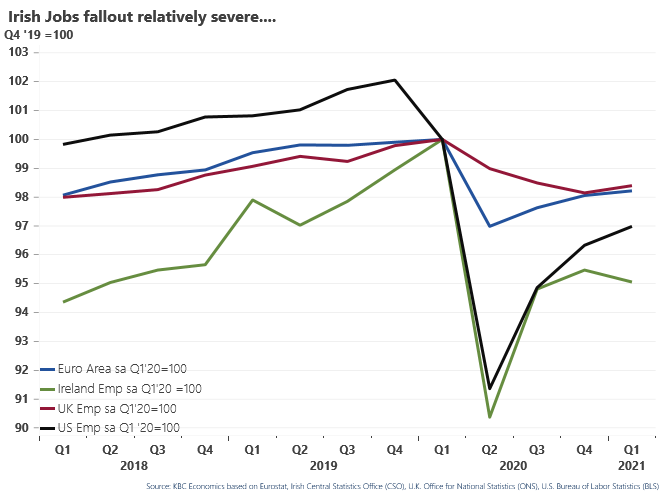 Accordingly, the official unemployment rate -which represents a lower bound estimate of joblessness at present-climbed from 4.8% in February 2020 to 7.9% in April 2021 in Ireland whereas the Euro area average climbed from 7.4% to 8.1% over the same period (the latest date for which EU data are available).  The latest Central Bank forecasts envisage Irish unemployment rising again in 2022 and while a material improvement is envisaged in 2023, the predicted jobless rate of 6.6% would imply an additional 50k unemployed in 2023 than when the pandemic struck.

Another area clearly worsened by the pandemic has been the housing market. Again, Ireland is far from unique in this respect but the impact on transactions was relatively severe-  about 2.7% of the housing stock was sold in Ireland compared to an estimated 4.3% in the UK and 5.4% in the US.  At the same time, the pick-up in house price inflation, admittedly from a notably lower base in Ireland, was broadly similar to that seen in the UK and US.  Most estimates envisage Irish housing output through 2020 and 2021 being a cumulative 7 to 10k below the pre-pandemic trend which was already falling well short of natural demand. 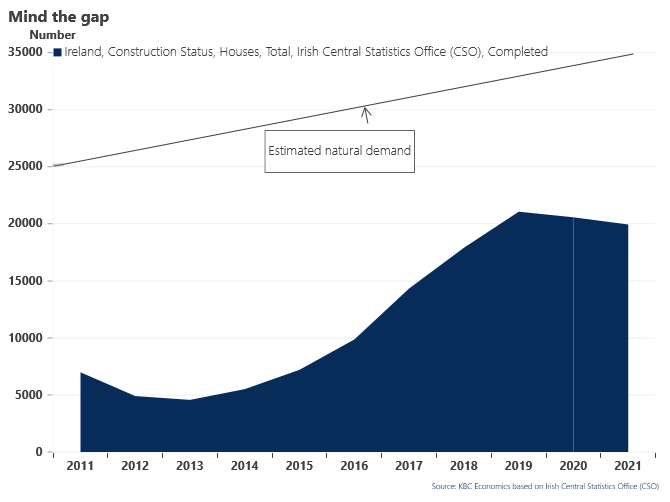 While financing is a critical element in ensuring an improvement in housing supply, it is not the only constraining influence. In such circumstances, the key question is how much of any increased public injection into housing would serve to boost activity and how much would simply translate into higher prices. History suggests rapid surges in homebuilding are associated with rising inflation-across a broader area than housing- and inefficient resource allocation. This might suggest that further increasing public investment in housing by more than €1bn per annum would carry significant stability risks to the housing market and the broader economy. 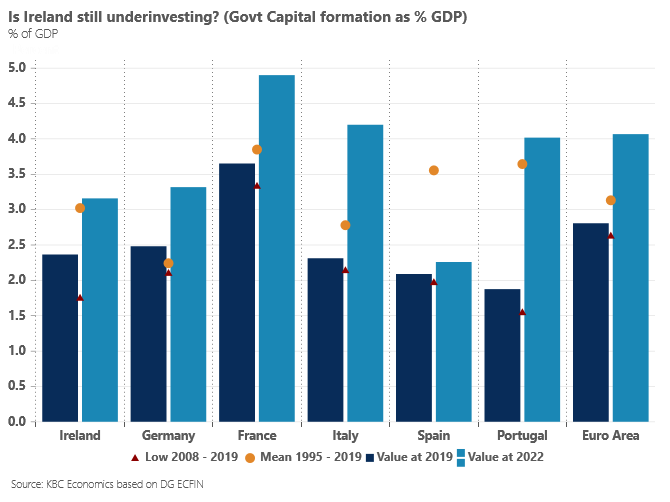 The diagram above suggests that notwithstanding recent and budgeted increases, the planned level of Irish public investment spending for 2022 is relatively low whether we assess it (a) compared to other Euro area countries, (b) compared to the historic norms, and (c) compared to its post financial crisis low-point. On each of these grounds, a notably higher level of economic and social capacity-enhancing infrastructure spend could be justified in coming years.

We would also highlight that this spending is measured in ‘gross’ terms. Given the wear and tear on infrastructure, official estimates suggest that on average about 1 to 1 ½ percentage points of the Government’s present capital spend of  around 3% of GDP is simply to maintain the current level of infrastructure.

We would further note that these data do not include the significant financing of investment in many EU countries to be provided by the Next Generation EU programme which envisages grants totalling 2.9% of Euro area GDP being made available. Given Ireland’s limited allocation, the case for increased domestically funded investment is stronger.

Of course, it might be argued that the Irish figures are depressed by using GDP rather than GNI* as the denominator. However, public infrastructure is a key consideration in the attractiveness of Ireland as a location for Foreign Direct Investment and, as a result, needs to equate to that level of activity. Consequently, in terms of the scaling of Investment, GDP appears the more appropriate refence point in these calculations.

In very broad terms, the requirements of current Irish macroeconomic conditions, the fiscal space and supportive monetary settings coupled with a comparative shortfall in public investment make the case for a material step-up in Government capital in Budget 2022. Recognising both physical and fiscal spending constraints, it would seem that a further increase in the order of €2 to €3bn might be feasible- of which somewhat less than half might be directed towards housing.

Our sense is that this could be accommodated within a profile of progressive improvement in the public finances over the next two to three years. While the confidence interval around fiscal forecasts is particularly wide at present, our sense is that such spending could be accommodated within a General Government deficit of 1-2% of GDP by 2023 which is comfortably below various projections for the Euro area average. In current circumstances, aiming for notably greater and/or faster fiscal improvements carries the threat of notably higher deficits in terms of infrastructure and employment.

Given the exceptional nature of current circumstances and continuing uncertainty about the strength and durability of recovery globally as well as domestically in addition to a changing future global tax landscape, making notably greater commitments either in terms of spending plans or promised fiscal targets may seem imprudent.