Irish consumer sentiment improved in March, recovering about half of the large drop recorded in February when the index fell to a 51 month low. The uptick in confidence in March doesn’t signal any dramatic improvement in either the current circumstances or future prospects of the average consumer. However, it does suggest that if Irish consumers are anxious the mood has not become apocalyptic as the Brexit deadline comes closer.

Our sense is that the less gloomy March sentiment reading may reflect some increased hope through the survey period that a mechanism might be found to ensure that a no deal Brexit might be avoided. At very least, there wasn’t a further step-up in Brexit-related fears in the manner that occurred in the previous survey period.

In the absence of additional Brexit risk, the reality of still positive economic and financial developments may have assumed slightly greater importance in Irish consumers thinking. The March survey period saw the nurses’ strike being called off and a number of key economic releases that showed activity and employment remain healthy if not white-hot.  At the margin, the early March signal by the ECB that interest rates might remain ‘lower for longer’ could also have helped the mood of Irish borrowers. These positive developments provide some offset to the still uncertain but troubling degree of risk posed by Brexit.

The KBC Bank/ESRI consumer sentiment index increased to 93.1 in March, a 6.6 point gain from February that followed a 12.3 point drop in that month from January. As the diagram below indicates, the trend in sentiment (as illustrated by the three month moving average of the index) continued to weaken in March in spite of the improvement in the latest reading.

Not surprisingly, monthly changes in sentiment, as illustrated by the swings in the monthly data around the three month measure, have been larger than usual since the beginning of 2018. This is primarily due to Brexit but likely also reflects more broadly based uncertainty particularly in relation to global economic and financial developments of late.

We tend to focus attention on monthly swings in sentiment but, in view of the ‘choppy’ nature of recent sentiment readings, it is also worth considering a longer term perspective. In this context, the March 2019 reading lies slightly above the long term average of the series (88.1) but is clearly below the average of the recovery period of the last three years (101.3). So, it might be suggested that while current levels of the sentiment index suggests Irish consumers are focussed on risks to the recovery, they are also conscious of some modest improvements in their circumstances particularly in areas related to their household financed of late. 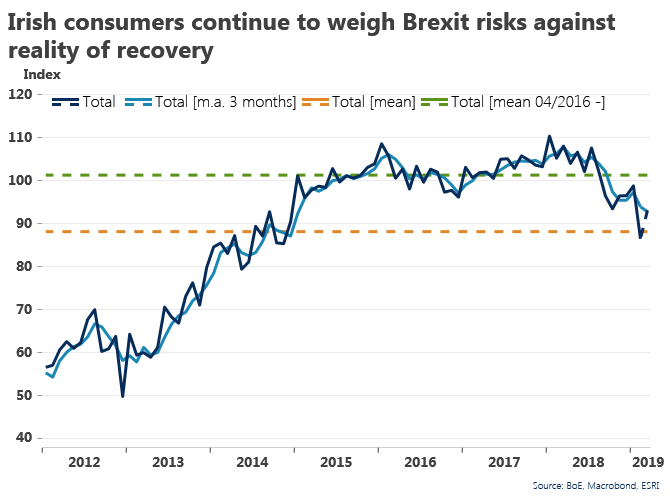 The pick-up in Irish consumer sentiment in March coincided with modest gains in similar measures for the US and the Euro area and an unchanged reading for the UK. It could be that an improvement in international financial markets through the survey period coupled with low inflation globally prompted a more positive outlook for household wealth and spending power that was widely felt across countries.

In this context, the early March indication by the European Central Bank (ECB) that its key official interest rates were likely to remain lower for longer than previously indicated may have directly contributed to a more favourable outlook for household finances of Irish borrowers as well as indirectly by contributing to calmer conditions on international financial markets (which may have reduced the pain of lower interest rates for those savers also holding other assets).

Irish economic outlook still a worry but far from woeful

The ‘macro’ elements of the Irish sentiment survey recorded the greatest monthly improvement in March in large part reflecting the particular weakness of these areas in recent months.  It should be noted that the March survey period saw the release of positive end-2018 data on employment and GDP. In both instances, these indicators showed signs of an orderly easing in the pace of growth from earlier quarters to a healthy if not white-hot pace at the turn of the year. So, the picture emerging from data released through the March survey period is one of a solid Irish economy that should be able to weather all but the most severe of Brexit outcomes.

Our strong view is that a sense that the threat that a ‘no deal’ Brexit was looming larger has been the key driver of poorer Irish consumer sentiment since last summer. The March survey period shed little additional light on the prospective path Brexit might take but there were convoluted if ultimately fruitless talks between the UK and the EU as well as stronger indications of the strength of opposition within Westminster to a ‘no deal’ Brexit. At the margin, these developments may have eased concerns that had become very elevated in previous survey readings.

If ‘macro’ concerns eased in March, they haven’t gone away. It remains the case that the balance of views on the twelve month outlook for the Irish economy remained negative in March but the 23:40 split of positive to negative views was notably better than the February split of 17:48. In the same fashion, in spite of strong employment data and further job announcement during the survey period, jobs market thinking split evenly 27:27 in March having been strongly negative on a 37:22 split in February.

The elements of the survey focussed on past and future trends in household finances both improved in March with a particularly notable change in thinking on the outlook for household finances in the year ahead reversing the unusually negative tone recorded in February.  A number of developments during the survey period may have contributed to this change in thinking.

First of all, the ending of the Nurses strike and media reports describing the phased increases in public sector pay likely conjured up a more favourable impression of the industrial relations climate in Ireland than that prevailing in February.

Furthermore, as mentioned above, the ECB signalled in early March that official interest rates would not rise this year, a stance that might be expected to improve the spending power of Irish borrowers. Moreover, as the pace of property price inflation showed a further clear easing and earnings data confirmed anecdotal evidence of stronger wage growth, the Irish home-buying market appeared to be moving onto a more sustainable path.

Significantly, however, the one element of the Irish consumer sentiment survey that recorded a lower reading in March than in April was the buying climate. Spending plans weakened marginally likely reflecting the still heightened uncertainty about what might happen next in relation to Brexit. At the margin, buying plans could also have been hit by concerns about higher prices or supply shortages in some Brexit commentary.

It remains the case that solid gains in employment and incomes should produce a healthy increase in Irish consumer spending in 2019. However, the sentiment survey suggests that caution may restrain any exuberance and, on the basis of historic experience as the diagram below hints, unless sentiment improves markedly, this means spending growth could be somewhat slower than in 2018. 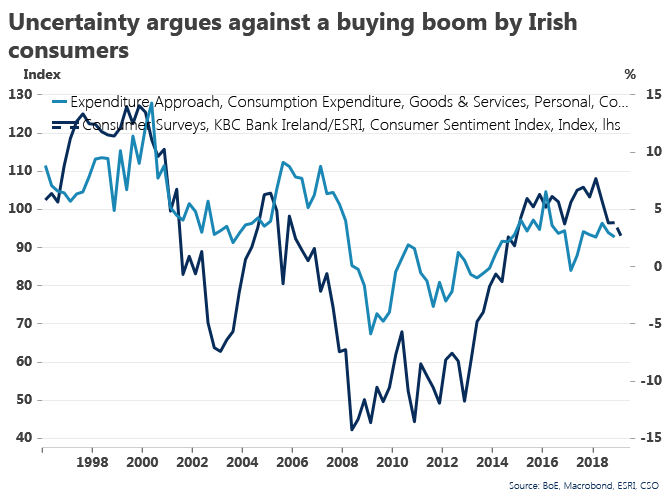