Survey suggests renewed concern about ‘macro’ outlook, emphasising need for stimulus that is strong in signal as well as substance

Irish consumer sentiment improved fractionally in July, following notably larger gains in May and June. It remains to be seen if this is a temporary pause or a sign of persistent problems facing Irish consumers. By highlighting the still anxious mood of Irish consumers, the July survey emphasises the need for a July stimulus package that credibly improves the outlook for activity and employment.

As the diagram below illustrates, the rise in the KBC Bank consumer sentiment index through the past three months has retraced about half the severe drop seen in March and April but this leaves the sentiment index well below its historic average of 87.4 and similar to levels previously seen in mid-2013 when the economy was still struggling to shake off the severe impacts of the financial crisis.

The marginal increase in sentiment in July at a time when the economy was re-opening likely reflects the restraining influence on confidence of a range of gloomy economic forecasts through the survey period and, possibly, also the influence of some disquieting developments in relation to the path of the virus at home and abroad of late.

In turn, concerns evident in the July consumer sentiment reading suggests the need for a Summer stimulus package that is strong in signal as well as substance and will encourage consumers to become more confident that the Irish economy can be set on a solid but safe path to a lasting recovery rather than a limited and possibly short-lived rebound. 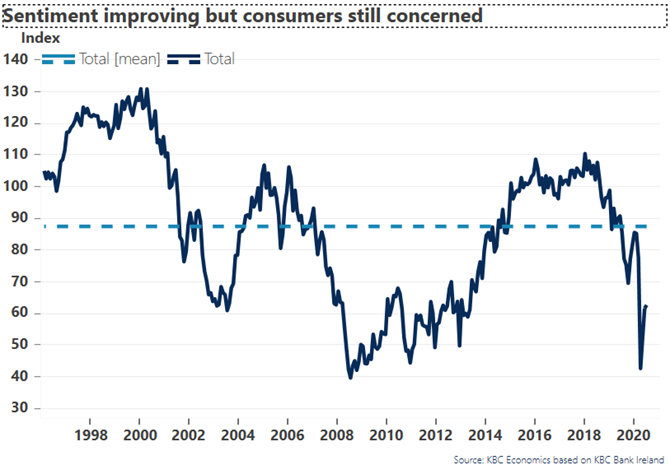 The July consumer sentiment survey points to the continuing fragility of current economic circumstances in Ireland (and elsewhere). While there is a strong sense that we have moved past the worst in terms of dislocation, the relief that propelled the May and June surveys forward has been tempered by renewed concerns in regard to large and lasting damage to the outlook for activity and employment.

Having been the key driver of improving sentiment in May and June, the ‘macro’ elements of the survey were the weakest elements of the survey in July. We can imagine that two complementary factors may have played a role in this reversal. First of all, while Irish consumers may have appreciated signs of a resumption of economic activity, they are likely becoming increasingly aware that this is not a return to the scale or shape of activity that prevailed prior to the pandemic.

A second negative influence on the ‘macro’ elements of the sentiment survey in July could have been a sequence of downgrades to domestic and external forecasts for the Irish economy. While the adjustments were small, the signalling that we may not have reached peak pessimism likely encouraged some re-assessment of the prospects for the economy and jobs on the part of Irish consumers.

Although the re-assessment of ‘macro’ prospects in July was modest, it underlines how embedded negative views on the outlook for activity and employment now are; Only one in twenty consumers expect the economy to strengthen through the next twelve months compared to one in eight in June. Similarly, only one in four see job prospects improving over that same timeframe compared to one in three a month ago.

Not surprisingly, the details of the July sentiment survey also reveal a predominantly downbeat view of household finances but in contrast to ‘macro’ elements, these showed small improvements this month led by slight reductions in the number of consumers expressing negative views in relation to their personal financial circumstances. In turn, this fuelled a modest improvement in the buying climate although this element of  the survey could also have been boosted by the re-opening of shops as well as the start of summer sales.