September residential property price data confirm a trend towards softer property values of late but they also emphasise that the picture is one of slippage rather than a slump. Moreover, a notably smaller if still substantial drop in the number of transactions in September compared to a year earlier hints that the peak impact of the pandemic on property market activity may be behind us.

Irish house prices were 0.8% lower in September than a year earlier and there were marginal downward revisions to preliminary numbers for August (now -0.9% y/y against -0.6% previously) and July (now -0.7% y/y against -0.6%).

Importantly residential prices increased month on month in September, albeit by a modest 0.2%, thereby continuing a trend of marginally positive monthly movements through the past three months when the initial impacts of the pandemic on property prices might have been expected to begin to materialise.

This suggests the pandemic had some dampening influence on the seasonal firming normally seen in property values through the summer months but did not depress prices markedly. In fact, as the diagram below indicates, property price data for recent months might even suggest there has been some bottoming out in a process entailing a protracted easing in the annual rate of housing inflation that has been underway for the past two and a half years. 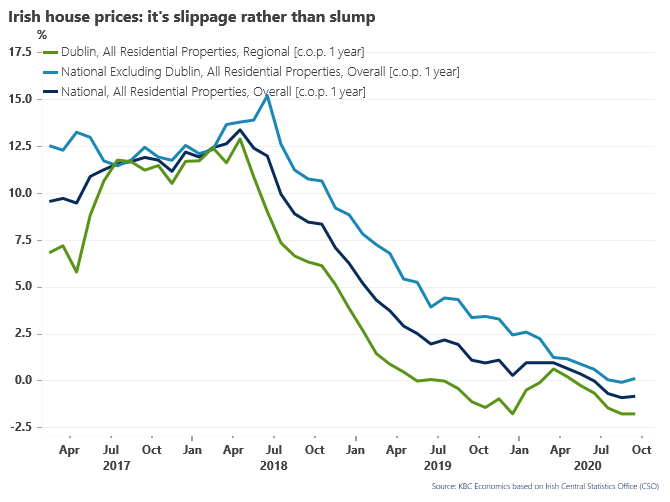 As has been the case for some time, the trend in Dublin property values remained softer with a decline of 1.8% y/y compared to a rise of 0.1%y/y in the rest of Ireland. However, the September numbers show tentative signs of stabilisation, and, more importantly, show little indication of any pandemic-related downgrading related either to affordability concerns or speculation that ‘working from home’ might cause a change in relative prices in favour of properties outside the capital.

Our best guess at this point is that structural shifts in the wake of the pandemic may take time to emerge and, counter to our initial expectations, it seems that a marked ‘impact’ effect on prices was the release of pent-up demand (repeatedly highlighted in the KBC homebuyer survey) that largely offset any negative read-through from Covid-19 to Irish property values. In this context, the capacity of large swathes of the Irish economy to traverse the initial months of the pandemic in a ‘business as usual’ manner appears to have underpinned confidence in future employment and income prospects allowing a focus on a perceived increase in the importance of housing.

The pandemic did have a marked impact on property transactions but today’s CSO release shows the number of market transactions involving household purchasers was down 22% y/y in September compared to a 40% drop in August.  As the diagram below illustrates, on the historic relationship between mortgage approvals and transactions, a marked pick-up in house purchase mortgage approvals of late hints at the prospect of a material rebound in activity levels into next year. 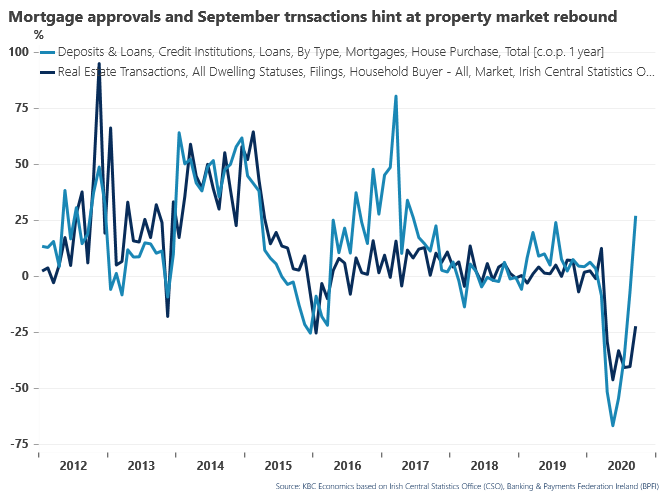 The CSO have also introduced a new breakdown of property price trends, separating new housing prices from existing housing prices. This highlights another factor supporting prices at present. With long term demand supported by favourable demographics and a solid (post-pandemic) economy, the limited increment to new supply coming from relatively expensive new construction is a material influence on ‘equilibrium’ prices.

In September, the median price paid for a new property was €353k while the median price for an existing property was €227k. While economists can sometimes be over-focussed on ‘marginal’ developments, this gap added to the consistently faster trend in new property prices  since mid-2018 is an important element supporting prices although it should be emphasised that it hasn’t stopped a gradual slowdown in property price inflation. 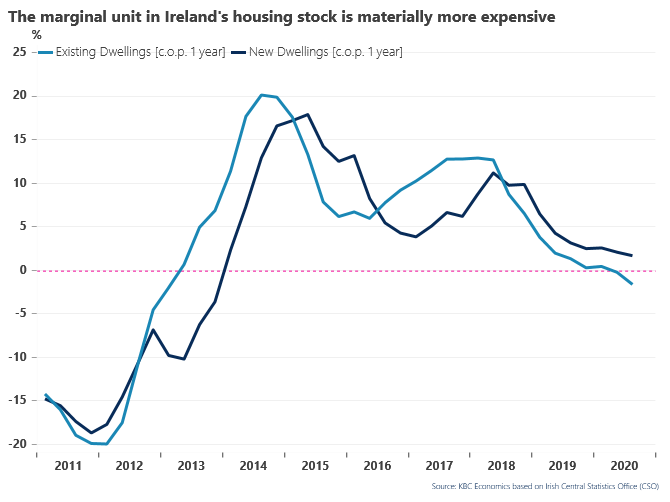