Irish employment shows a welcome but partial rebound in Q3

The most severe impact of Covid-19 on the Irish economy has been seen in the jobs market. While data for the third quarter show an expected bounce in employment, numbers at work remain well below the level prevailing prior to the pandemic. Moreover, monthly data show a renewed deterioration in the wake of increased health-related restrictions of late. The key task of economic policy must be to limit the extent to which temporary layoffs become permanent job losses.

While it is very obvious that impact of the pandemic on Ireland’s jobs market has been severe, statistical issues mean measuring the precise hit to jobs is far from straightforward.

Using the internationally agreed definition, there were 58.3k fewer people in employment in Ireland in the third quarter of 2020 than there were in the first quarter. Taking account of normal seasonal fluctuations, the drop is greater at 83.3k.

However, the standard definition of employment includes those ‘temporarily away from work’. An alternative specification presented by the Central Statistics Office that adjusts for those not working but claiming the Pandemic Unemployment Payment (thereby excluding these claimants from numbers counted as being in employment), the fall in numbers working rises to 275k and, if normal seasonal patterns applied, the shortfall would likely be in the region of 300k.

Both ends of this very wide range would represent a severe blow to employment trends. As the 300k number captures layoffs, many of which will prove temporary rather than permanent job losses, it should be regarded as an upper bound that will hopefully prove to be well in excess of the probable final impact of Covid-19 on employment. However, it should also be emphasised that the ‘lower boundary’ of a 83k jobs shortfall in the ‘official’ definition of employment, while very large, could prove a good deal too low.

In the same vein, the ‘official’ measure of unemployment at 7.1% in Q3 clearly understates the rate of job attrition even if the Covid-19 adjusted figure of 15.9% proves too negative. Moreover, the read-through from tougher health-related restrictions to preliminary monthly jobless rates for October of 7.3% on the ‘official measure and 20.2% on the adjusted basis speaks both of the pace of change and the balance of risks in regard to the outlook for jobs.

Our repeated focus on the need for an aggressive policy response to the economic impact of the pandemic reflects a concern that significant numbers of temporary layoffs could morph into more lasting exclusion from employment opportunities. The diagram below indicates the notably greater persistence of Irish employment difficulties in the wake of the previous crisis and the sharp, by European standards, recent downturn of the Irish jobs market in the wake of the pandemic (using the lower ‘official’ measures of job losses). 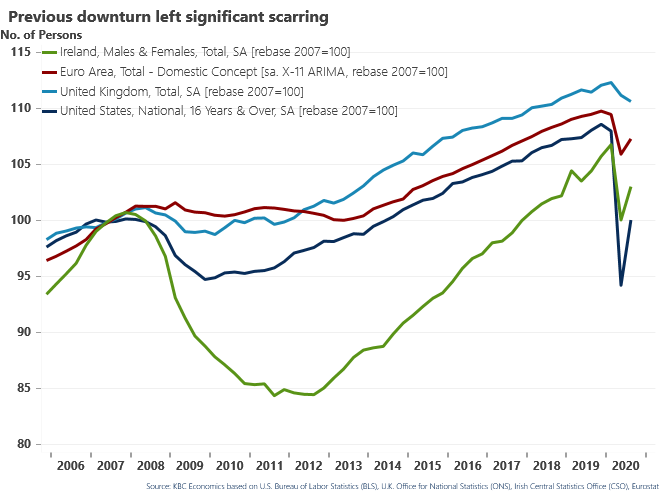 As a permanent ‘scarring’ of employment prospects is probably  the most threatening economic consequence of Covid-19, these data underscore the importance of policy actions that are substantial, sustained and focussed on the uneven nature of the fallout in jobs. The provision of a €3.4bn contingency fund in the Budget ’21 arithmetic provides some leeway in this regard but it may be that additional public funds are required to limit the lasting damage to jobs.

While trends in many Irish economic indicators have defied earlier pessimism and likely outturns for GDP and the public finances this year seem set to see markedly less of a deterioration than for most comparable economies,  the weakness of the Irish jobs market provides a more sobering and probably more broadly representative assessment of the nature and scale of the risk to Irish economic prospects.

It is also the case that comparatively limited fallout in terms of GDP and Budget metrics provides valuable fiscal space to address the hit to a larger and potentially longer lasting hit to jobs here than elsewhere. It would seem a very disappointing outcome if the most significant economic impact is a sharp Irish underperformance in relation to employment but that is what is suggested by the recently published EU Commission forecasts.

It is worth noting that the Autumn 2020 EU Commission forecasts envisage numbers at work in Ireland being 2.9% lower in 2022 than in 2019 whereas the decline envisaged for the EU as a whole is 1.2%. If Ireland were to match the average EU performance, this would imply numbers at work in Ireland would be 40k higher in 2022 than the Commission now envisages. In contrast, the Commission expects Irish GDP growth to significantly outperform the EU average over the ’20 to ’22 period while the rise in Irish public debt is expected to be well under half that of the EU as a whole.

The uneven nature of the jobs fallout is seen in several aspects of the Q3 labour force survey. One metric is to adjust the 'headline' numbers at work figure that shows a y/y drop of 1.4% by including those 'temporarily away from work'. This substantial adjustment suggests a drop in underlying unemployment of 5.2%. This is broadly comparable to the CSO's estimate of total hours worked which fell 5.4%. This implies the Irish labour market has split into those either 'benched' temporarily or suffering permanent job loss on one hand and, on the other, a significant tranche working broadly similar hours as before.

Further notable divergences by sector, by age, by region, and by education level can be seen in the diagram below. Beyond the broader 'macro' consideration of lost activity and employment, the corrosive economic and social impacts of such divergences are also problematic. 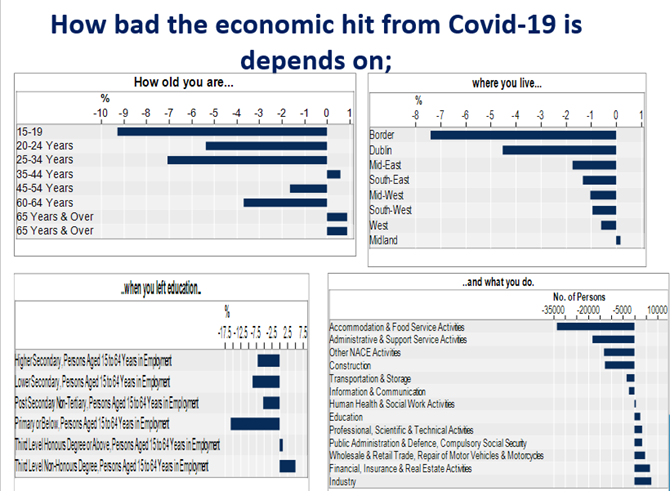