Mid-year exchequer returns show Ireland’s public finances remain broadly on track to meet Budget ’19 targets with some scope for a marginally better than planned outturn. In turn, this suggests there may be scope for a slightly more generous package of spending and tax adjustments in Budget 2020 than had been planned.  Our sense is that the net figure could be between €1000 and €1500 million rather than the mooted €700 million (the gross figure might be significantly larger given likely tax increases).

There can be marked shifts in the path of both Government spending and revenues as the year progresses and such variability is significantly amplified by a range of uncertainties in the near term outlook for the global economy. However, the broad message of the mid-year return is that tax receipts are on track and public spending appears to be under control. Indeed, current spending on health, while up a significant 6.8% y/y, is unusually albeit fractionally (-0.6%) behind target.  It should be noted that Government spending has risen more slowly in the first half of 2019 (+4.6% y/y) than in the first half of 2018 (+8.1%) whereas tax revenues rose faster (+6.9% y/y) than a year ago (+6.5% y/y). 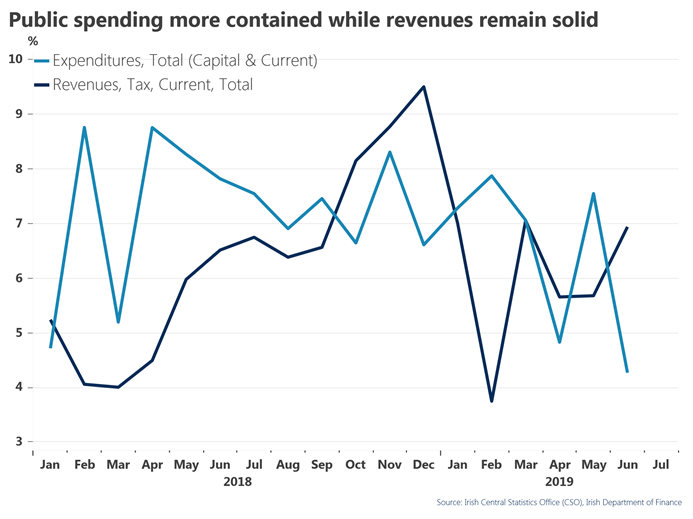 The trend in the main income and spending taxes is indicative of a healthy rather than hot Irish economy in the first half of 2019. Income taxes are up an encouraging 7.7%y/y but still fractionally (-0.4%) behind official targets. VAT returns are up a notably more modest 4.9% y/y and running a more substantial 1.9% behind target. These trends are consistent with solid rather than spectacular growth in household spending and the shortfall in spending tax growth relative to income taxes hints at a still cautious Irish consumer.  While it is difficult to plot trends in corporation tax revenues against domestic economic performance, it is important for the health of the public finances that the previous shortfall in this area has declined markedly to the point where they are now broadly in line with target.

It should also be noted that in line with recent precedent and driven by quite dramatic declines in government borrowing costs globally, the cost of servicing Ireland’s national debt was 4.1% lower than a year ago and 2.1% lower than envisaged. In light of growing expectations for further policy easing by the European Central Bank (and the US Federal Reserve), it appears likely that Irish government borrowing costs will remain subdued for some significant timewhile the disappointing global backdrop that is prompting lower borrowing costs will also act as a restraining influence on activity and inflation in the Irish economy.

In these circumstances neither fiscal constraints nor overheating arguments appear to significantly limit the scope for adjustments in Budget 2020 that further raise public spending or curb tax growth. The key task is to quickly move beyond simplistic discussions around debt or inflationary concerns and focus on what measures would sustainably improve the productive and social infrastructure of the Irish economy. The important question now is whether any specific measure will improve things rather than whether it is affordable.

It should be emphasised that such an approach would be entirely different to one based on pushing spending and/or taxes to the bounds of what is deemed affordable.  Agreeing such a framework and articulating it in spending and taxation plans would hopefully move us some distance away from the traditional circus of Budget day surprises.  Importantly, this would reflect the reality that causality in terms of stability and sustainability runs primarily from Irish economic conditions to the public finances rather than the other way round.