Pick-up in underlying sales leaves them still 17.8% below Q1 average

A strong but not surprising increase in Irish retail sales in May still left spending markedly below pre-Covid-19 levels. While the headline month on month gain of 29.5% goes some significant way towards reversing the 35.8% drop seen in April, this is notably the result of a pick-up in car sales in May from a negligible number in April.

As several key Federal Reserve and ECB officials have said in recent weeks, looking at monthly changes in isolation may give a very misleading sense of current economic conditions. In this context, the bounce in Irish retail sales in May represents only a small recovery of earlier losses.

The details show sales at department stores increased 60.7% in May from April but they were still 63.9% lower than a year earlier. Similarly furniture sales were up 85.9% m/m but down 74.6% y/y. Even a 92.5% monthly increase in spending on hardware and paint left this category 2.5% below year earlier levels, Only food businesses whose sales fell 1.6% from April posted material yearly gains of 17.6% whereas non-food businesses (excl. Cars and bars) saw a 32% monthly bounce that still left them down 33.2% below the level of May 2019.

Probably the most revealing comparison is the 9.3% monthly rise in retail sales excluding cars in May which shows only a very limited retracement of the 24.0% drop in this metric in April. Tellingly, the level of retail sales ex-cars for May was 17.8% below its Q1 average, implying the prospect of a double digit fall in consumer spending for the second quarter of 2020. As the diagram below indicates, the performance of Irish retail sales through the April/May period has fallen short of similar indicators for the UK. 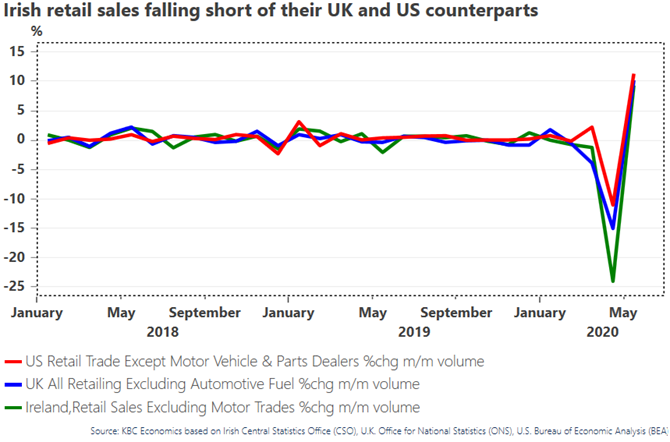 While we expect a further improvement in Irish retail sales in coming months as the easing of health-related restrictions continues, the likely scale of gains through the balance of 2020 is very unlikely to come anywhere near recovering the losses in spending experienced through the second quarter. Indeed, most forecasts envisage a double digit fall in consumer spending for 2020 as a whole and an associated substantial decline in employment.

The fragile financial position of many consumer-facing businesses highlights the need for timely and targeted fiscal measures in the upcoming July recovery package to help ensure that an inevitable shortfall in consumer spending and the related hit to employment isn’t larger and longer -lasting than it needs to be.

We previously also argued for time-bounded measures such as the extension of the wage subsidy scheme and temporary cuts in VAT to reduce uncertainty as well as offsetting increased caution on the part of consumers that will boost saving relative to spending. The May retail sales data reinforce the case for forceful fiscal action in this regard.

The limited recovery emerging in consumer sentiment and spending for May and June suggests that the worst of the downturn is now behind us. However, these indicators suggest that while , at least in technical terms, the recession may now be over, the emerging ‘recovery’ may be entirely inadequate in scale and speed to reverse the prospect of lasting losses in employment and income. Policy failings meant similarly protracted shortfalls through the 1980’s and in the wake of the financial crisis left severe scarring on the Irish economy. Avoiding such an outcome is the major challenge immediately facing the new government.