Prices increase 0.3% m/m but not enough to prevent y/y fall of 0.5%-the first annual drop in seven years

Irish house price inflation turned negative year on year in July for the first time since May 2013 but the 0.5% annual drop has to be seen as relatively limited in light of the exceptional impact of Covid-19 on the Irish economy. The likelihood is that a softish trend in property prices will persist through the remainder of the year but the extent of weakness looks likely to be markedly less than previously envisaged.

The continuing resilience of property values is seen in the fact that Irish house prices rose 0.3% month on month in July but this was less than the usual seasonal increase seen at this time. Hence, the annual rate of inflation fell from zero in June to -0.5% in July.

An easing in price trends was evident in Dublin where prices fell year on year by 1.3% in July compared to a drop of 0.5% in June and across the rest of Ireland where annual property price inflation remains positive but declined to 0.2% in July from 0.6% in June.

As has been the case in recent months, the trend in property values continues to hold up much better than in transactions. While there was an encouraging increase of 13% in transaction levels between June and  July, this is less than normal seasonal buying patterns would imply. As a result,  July activity levels saw a 40.7% decline y/y, which represents a weakening on the 33.1% decline y/y seen in June.

Some sense of the resilience in Irish house prices in recent months is suggested by the diagram below which compares trends in employment and property values. As the diagram suggests, trends in property prices tend to mirror developments in the broader economy but usually on an amplified scale. 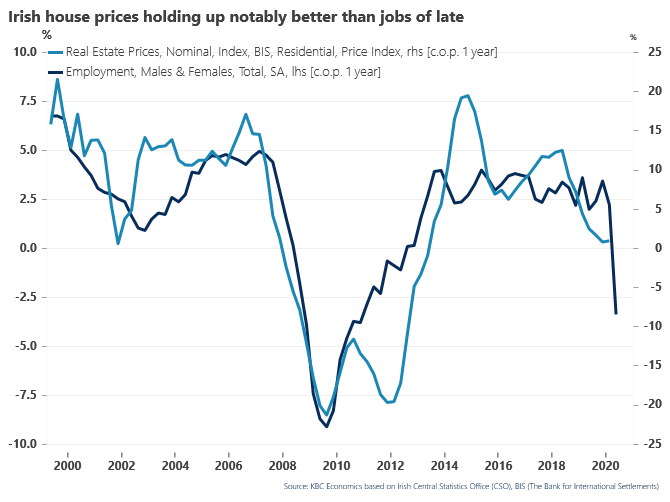 Consequently, the comparative strength of property prices of late marks a notable departure  from precedent. Our sense is that property prices will not permanently detach from changed economic realities but a range of factors suggest any adverse impact may be notably smaller and slower to materialise than might have been expected.

A number of elements may be combining to support property values of late. An important consideration is the speed and scale of Government income support measures which alongside institutional arrangements to permit payment deferrals effectively removed any risk of forced sales. With new supply curtailed, this limited any sharp adverse change in the demand/supply balance.

Additional policy support has emerged in the shape of an increase in the maximum ‘help to buy’ payment and the increased impetus of working from home may have awakened a substantial element of latent demand. (This was hinted at in the KBC Bank homebuyer survey which has suggested consistently that as many as one on three adults would at least consider purchasing a property in the following two years. For some that possibility may have become more of a necessity because of the events of the pandemic). As a result, significant counterweights to the adverse impact of the pandemic on demand have emerged in recent months.

A further important factor in stark contrast to the previous crisis period is that Irish property values are not judged to be markedly out of line with broader economic developments. As the diagram below illustrates, ECB estimates suggest that for the past couple of years a modest degree of undervaluation in Irish property values has grown to the point where, on average, the ECB estimated that Irish property prices were 9.5% undervalued in the first quarter of 2020 (ECB metrics suggest a possible valuation range between -1% and -18%). This could represent a significant cushioning factor against the current economic downturn. 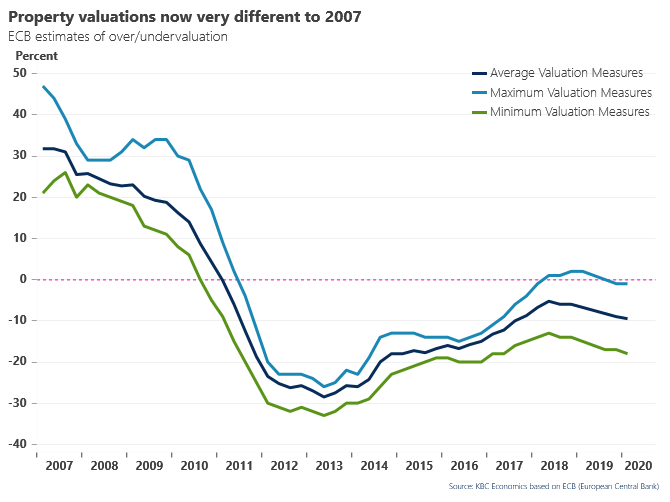 While recent GDP data suggest that on some ‘macro’ measures the impact of the pandemic on the Irish economy could be materially less damaging than previously expected, some deterioration in the ‘fundamentals’ underpinning the Irish residential property market appears unavoidable. However, the evidence of the July house price data suggests that countervailing features mean the effects on house prices may be smaller and slower to materialise.